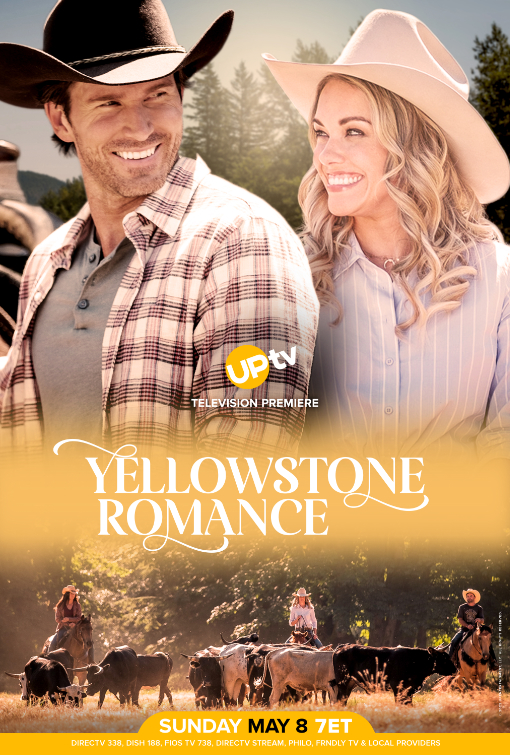 YELLOWSTONE ROMANCE is a romantic comedy airing on UPtv. Olivia is happy living life with her best friend, Amber, in New York City. When she finds out Amber is engaged and moving to a ranch, Olivia selfishly isn’t happy for Amber. She plans a bachelorette celebration on a working dude ranch to try to change Amber’s mind. What first seemed like a simple plan to keep her best friend in the Big Apple turns into a much bigger adventure. For example, Olivia surprisingly is the most successful adapting to life on a ranch. This attracts the attention of Travis, one of the ranchers. Will Amber second guess her marriage plans? Will Olivia give life outside the city a chance?

The production quality in YELLOWSTONE ROMANCE is well done with gorgeous scenery, visually pleasing, smooth camera work, and an excellent use of color. However, the story and acting are a little corny. Ultimately, however, YELLOWSTONE ROMANCE has morally uplifting, redemptive qualities, where true friendship, forgiveness and love for others overcomes selfishness and fear of change. MOVIEGUIDE® advises light caution for younger children.

(Ro, BB, C, V, N, A, M):
Dominant Worldview and Other Worldview Content/Elements:
Light Romantic worldview overall with a great deal of focus on emotional love, characters are driven by their emotions, and characters are selfish, thinking of themselves above others, but that changes over time and one character also gets engaged after six weeks, and there are strong morally uplifting and some redemptive elements focused on love for others, friendship and forgiveness overcoming selfishness and fear of change
Foul Language:
No foul language
Violence:
Light, inconsequential violence includes girl falls off her horse but it’s rather gentle, and a gunshot is fired to scare off a wolf
Sex:
No sex scenes or sexual immorality (just brief kissing in the final scenes)
Nudity:
One scene of upper male nudity coming out of the shower
Alcohol Use:
Implied alcohol use (drinks are seen once in a bar but characters don’t seem to be shown drinking)
Smoking and/or Drug Use and Abuse:
No smoking or drugs, and;
Miscellaneous Immorality:
Light behavior problems with one character doubting her friend and trying to hold her back from something, plus other characters have issues about being hospitable to people from other backgrounds.

YELLOWSTONE ROMANCE is a romantic comedy airing on UPtv about two best friends from the Big Apple who have always known life together in the city until one of them suddenly gets engaged to a rancher and must leave city life behind, something her best friend doesn’t want to happen.

Olivia has just received news that her best friend, Amber, has gotten engaged and will be leaving their life together in New York City, to join her fiancé on his ranch. Selfishly, Olivia doesn’t want her best friend to go and simultaneously doesn’t think Amber will be able to handle the ranch life.

In order to prove her point, Olivia creates the bachelorette celebration around a working dude ranch trip for Amber, herself and their friend, Justin. From the second they arrive, it becomes more than clear that the city kids are out of place. Amber and Justin both are shocked to hear it’s not quite a vacation, and they will all be put to work.

Happily, all three friends are determined to give the ranch work their all. Maybe some more than others. . . . Travis and Kat, two of the ranchers, are not super thrilled to have city folk joining them, and it takes a while before they warm up to Amber and her two friends.

All three city friends have a slightly tough time adapting to this new environment, but Olivia seems to catch on the quickest, which surprises Travis and opens his eyes. Travis starts to realize he shouldn’t be so quick to assume things about people. Also, Amber and Justin are learning a thing or two about themselves as well!

While things seem to be going well, the trip is coming to an end, and it feels as though everyone is ready to return to life as they know it. Although she’s been inspired by her visit, Olivia thinks it’s time to get back to the city. Although Travis has had his eyes opened, he believes he’s ready for real life on the ranch again – without any visiting vacationers. Even Amber is second guessing moving to a ranch.

Will everyone give change a second chance? Or, will they resort back to what they know for fear of the unknown?

The scenery, filming and use of color in YELLOWTONE ROMANCE are aesthetically pleasing, drawing in viewers. The country setting and nature shots are absolutely gorgeous. However, the story and acting are a bit cheesy or corny. Despite this, the movie’s wholesome, heartfelt content will keep viewers entertained.

YELLOWSTONE ROMANCE has a light Romantic worldview overall. The focus is on emotional love, with characters being driven by their emotions. Also, characters act selfishly rather than thinking of those around them, although they don’t do it with bad intent. Ultimately, however, YELLOWSTONE ROMANCE has morally uplifting, redemptive qualities, where true friendship, forgiveness and love for others overcomes selfishness and fear of change. MOVIEGUIDE® advises light caution for younger children.