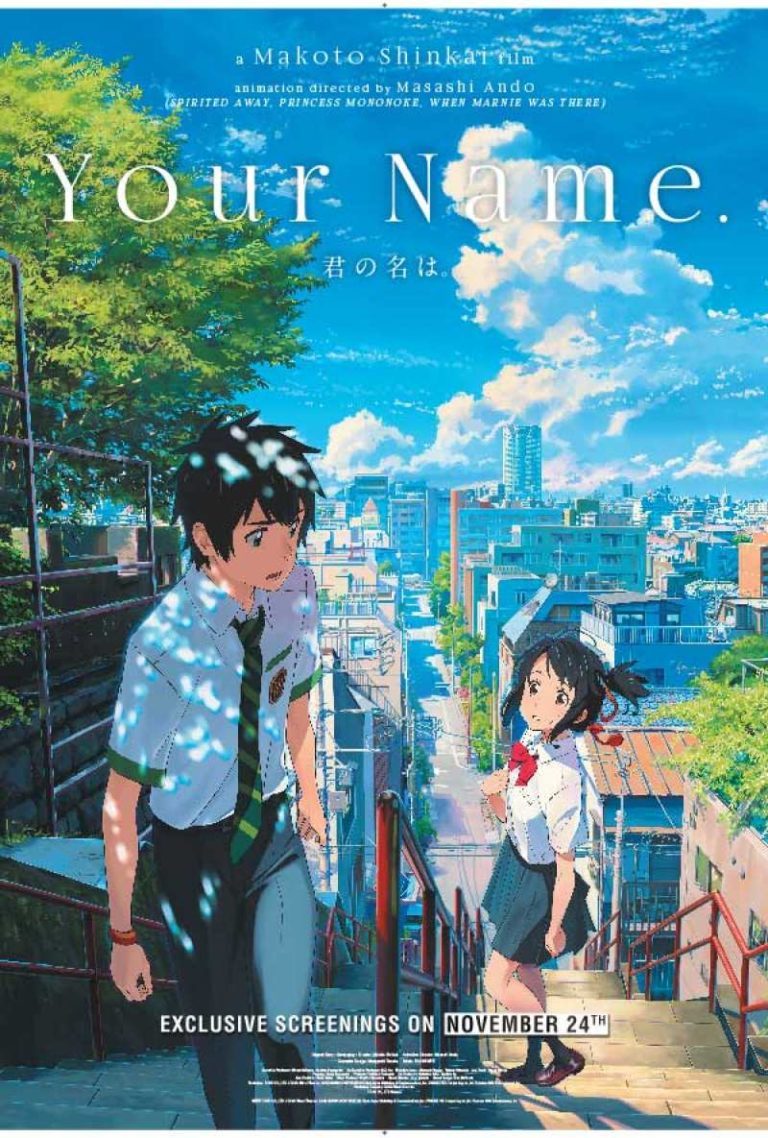 In a world plagued by busyness, YOUR NAME is an animated Japanese movie that follows a teenage boy and girl in their quest to find a bond that transcends time and space. Separated by vast distances and inhabiting each other’s bodies, Mitsuha and Taki wrestle with finding answers and each other. Over time, they begin to care for one another. In a race against disaster, they must work together and break the mystery behind the swapping of bodies.

YOUR NAME offers tremendous quality and beauty. The aesthetic of each frame is pleasing to the eye. The sound scape and score provide entry to an alien world. That said, despite some strong moral elements, the movie’s moral and spiritual content occurs mostly in a context of false pagan religion from the East. The movie’s gender bending story also occurs mainly within that context. The Bible speaks clearly against pagan religion and perverse notions of switching one’s sex. So, media-wise viewers will find YOUR NAME to be unacceptable, no matter how well it is put together. YOUR NAME also contains brief foul language.

(PaPaPa, FRFRFR, HoHoHo, BB, C, L, VV, S, A, D, M) Very strong Eastern pagan worldview steeped with tradition and a moral politeness indebted to proper etiquette and honor, especially to one’s ancestors, passing references for the existence of a previous life, references to rituals attached to the Shinto tradition, shrines and references to a local guardian god, a view of twilight that sees it as a gateway to another time and space, stressing moral virtues of friendship, honor, duty, and love; a couple obscenities (including a partial SOB) and language that boarders on the questionable, such as sucks and boobs; there is little to no violence in the way of fighting, the natural violence of a meteor strike destroying a town is graphically depicted without the bodies of the dead; there is no direct sexual content, though the curiosities of adolescents with regards to changing bodies is present, several scenes include the main characters who have swapped places with the other gender exploring being in a body that’s different, scenes include groping of clothed breasts and clothed male genitalia; one scene depicts the nude upper back of the female lead in underwear; a few scenes include the consumption and discussion of sake´, but no drunkenness; two scenes involve characters smoking cigarettes; and, minor acts of disobedience, breaking and entering, hacking the public announcement system, and disrespecting a parent.

Exquisitely animated, YOUR NAME is a compelling Japanese Anime that follows the lives of Mitsuha and Taki. Mitsuha, a young teenage girl from a small village, longs to break free from her family ties and small town life. Taki, a young teenage boy from Tokyo, has an unexplained deep sense of longing he constantly seeks to fulfill. The beautiful opening sequence follows a comet entering earth’s atmosphere, and through this celestial event, introduces the premise of switching bodies with another person. Throughout the movie, Mitsuha and Taki trade places with each other, experiencing life as a different person and gender.

At first, the switch is very disruptive to their lives. Taki, trapped in a teenage girl’s body, struggles with the new identity. His horror gives way to boyhood curiosity with the opposite gender. Likewise, Mitsuha wrestles with the opposite dilemma of being a teenage girl trapped in a teenage boy’s body. Here too, Mitsuha reacts with both horror and curiosity at the difference between male and female. The premise of body switching presents the story with moments of levity related to the awkwardness of teenage puberty in light of a different gender.

Once past the novelty of different biology, each character must live as if they were the person whose body they inhabit. Difficulties arise as Mitsuha and Taki live out each other’s lives, leading to the creation of ground rules. Over the course of time and through experiencing life through the body of the other, Mitsuha and Taki begin to care for one another. With this development, the distance between the two characters and their lives becomes apparent. While the cause of the switching is never made clear, the meaning behind it comes to the fore as the end draws near. As the resolution begins to play out, an attempt is made by Mitsuha and Taki to cross the divide of space and time to make a meaningful connection with each other, a connection so deep, that the other’s survival depends on it.

YOUR NAME offers tremendous quality. The animation is world class. The cinematography breathtaking. The soundscape and score buttress and further the story. In short, YOUR NAME displays a marvelously full world that calls out to the viewer.

However, being a tale from Japan, there are some negative elements built into the story. The world created in YOUR NAME is thoroughly Eastern. The towns and countryside all have shrines to local deities. Thus, while these false pagan references mostly occupy the background, the guiding principle behind the lives of the characters originates from Shinto Buddhism. Concepts from this way of thinking ground themselves heavily in the movie’s references to tradition and honoring family ancestors. There is an openness of each character to the possibility of there being more to life than a person can experience with the five senses. In this regard, YOUR NAME is consistent with a biblical worldview that acknowledges there are unseen orders of creation that are as real as the one experienced by the senses. YOUR NAME posits that these other spiritual dimensions can be experienced by humans, but it does so within false pagan context.

On a more positive note, the movie does contain some positive references to finding meaning and connecting with other people on a deeper level. It also stresses the virtues of friendship, honor, duty, and love.

The other areas of concern in YOUR NAME include some unnatural sexual references, questionable language, actions taken by the characters, and a graphic portrayal of the destructive potential of nature.

First, the moments of discovery by Mitsuha and Taki lead to some moments of each exploring the body of the other. Clothes are always on however, and each character is depicted as touching the other’s private parts in a non-sexual way. Of course, these scenes occur within the context of a homosexual or LGBT story about switching sexes. They also reflect the move’s false pagan view of spirituality and human nature.

The second area of concern regards the language used in some scenes. Though they are never used crassly, most of the words are still harsh.

As for the actions taken by the characters, there are a few scenes that depict smoking and drinking, though not to excess. Towards the end, however, there is breaking and entering and other rebellious behavior.

Lastly, there is a scene that depicts the graphic destruction of a town. This scene depicts nature’s destructive potential.

YOUR NAME’s target audience ranges from teenagers to adults. The themes and content of the story belong to this age group, and not to pre-adolescents or younger children. Despite the movie’s main theme of two characters trying to find a deep, meaningful connection to one another and its stress on positive moral virtues such as friendship, honor and love, the negative elements in YOUR NAME make the movie unacceptable. The Bible speaks clearly against false pagan religion and notions of switching one’s sex.