SHUT UP AND SING 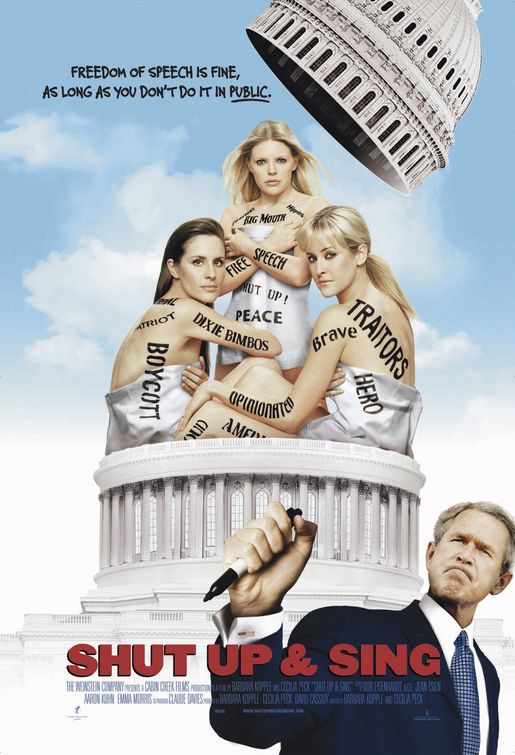 he documentary SHUT UP AND SING opens with the Dixie Chicks singing the National Anthem at the 2003 Super Bowl. The band was just about to embark on "The Top of the World" tour, and the USA was about to invade Iraq. Video footage traded screen time between the impending war and the music of the Dixie Chicks. In an unscripted remark, at a London concert, lead singer Natalie Maines drops a political bomb that changes the Dixie Chicks, their lives and music forever. "Just so you know," she says, "we are embarrassed the President is from Texas." In the wake of the remark, their record and concert sales plummeted, but the band members remain steadfast.

(RoRo, PCPC, APAP, Ab, O, LL, V, S, N, A, M) Strong Romantic worldview for liberals with strong political correctness and anti-patriotism trying to rehabilitate the Dixie Chicks singing group who were attacked for making a personal attack on the President overseas, plus a defiant attitude that undermines Christian forgiveness and singer calls a psychic; 21 obscenities; no depicted violence but the possibility is discussed when the singing group receives a death threat; three sexual references, including a magazine cover where the signing group is naked but nothing salacious is show; some racy near nudity; the infamous Entertainment Weekly "Branded" cover, an underwear joke in a Howard Stern interview and a visual by one of the singers of how to get a gun through security; alcohol use; mo smoking; and, movie title steals book title from another author famous for criticizing entertainers who take advantage of their popularity and media spotlight to push their own political agenda.

SHUT UP AND SING opens with the Dixie Chicks singing the national anthem at the Super Bowl 2003. They are about to embark on their “Top of the World” tour, and the United States of America was about to invade Iraq. Video footage trades screen time between preparations of war and the music of the Dixie Chicks. In an unscripted remark at a London concert, Natalie Maines, the lead singer, drops a bomb that would change the Dixie Chicks, their lives and music forever. “Just so you know, we are embarrassed the President is from Texas.”

Two-time Academy Award winner, (1976 Harlan Co. USA and 1991 American Dream), Barbara Kopple along with Cecilia Peck merge a music video, a political documentary and the story of the Dixie Chicks as they react and live through the aftermath of Natalie’s remark.

After being the number one women’s band in musical history, their records plummeted from the top of the Country Music charts to banned on the radio. Many DJs refuse to play their songs, but it doesn’t stop there. In one nationally televised event, Dixie Chick CDs are crushed by a bulldozer as crowds cheered.

So they fought back. After an attempted apology failed, (“I was disrespectful. . . we are patriots,”) they bared their defiance. Feeling “branded,” they appear nude on the cover of Entertainment Weekly, with “BIG MOUTH” stamped on Natalie’s chest and “TRAITOR” across Martie Maguire’s back and more were stamped in big black letters on their bare skin.

The cover shot graphically exposes not just a “why us” attitude (the other two members of the band, Emily Robison and Martie Maguire, supported and strategized throughout the documentary) but a stubborn, united and aggressive unwillingness to back down or apologize. It’s as if making a mistake, or in this case a rude statement, is a line in the sand and justifies the actions of the so called victim. However, it got them attention and fueled the fire.

“We don’t want people to think that we’re trying to be provocative. It’s not about the nakedness. It’s that the clothes get in the way of the labels” (Natalie Mains, EW Apr. 25, 2003).

The Dixie Chicks got in the way of their own industry. Not only did DJs stop playing their music, but they also started a rift with Toby Keith when they made disparaging remarks about his rousing patriotic song, “Courtesy of the Red, White and Blue.” Natalie exacerbated the feud by creating an obscene T-shirt which provoked the creation of another obscene T-shirt attacking the Dixie Chicks, adding fuel to the fire of controversy.

The Dixie Chick world changed dramatically. Telling scenes with their Lipton Tea representatives as they lose their sponsorship and news clip of the John McCain chaired senate committee where Simon Renshaw (the Dixie Chicks manager) argues that the corporate owners of the radio stations forced the DJs to stop playing the Dixie Chicks. CD sales were going nowhere.

Even so, the Dixie Chicks stuck together, and here is where the film sings. The relationships between the three band were strengthened by their respect and love of their music. The up close look of Natalie, Martie and Emily as they work in rehearsal, play with their children and create strong relationships with their husbands is the foundation for the cohesiveness and united front of the three. The movie also shows the birth of Emily’s twins complete with “girl talk” over magazines during her labor.

All this should be heartwarming, but it isn’t, and the result is an overwhelming sadness. In SHUT UP AND SING, the spiritual act of forgiveness is misunderstood and misconstrued. Sure they asked forgiveness for their remark, but when it wasn’t accepted, they dug in their heels. The documentary ends where it begins in the same concert hall in London 2006 with the same words from Natalie, “Just so you know, we are embarrassed the President is from Texas.”

Of course, forgiveness also means letting go. “Get rid of all bitterness, rage and anger, brawling and slander, along with every form of malice. Be kind and compassionate to one another, forgiving each other, just as in Christ God forgave you.” (Eph. 4:31-32)