THE LORD OF THE RINGS: THE TWO TOWERS

"Turning of the Tide" 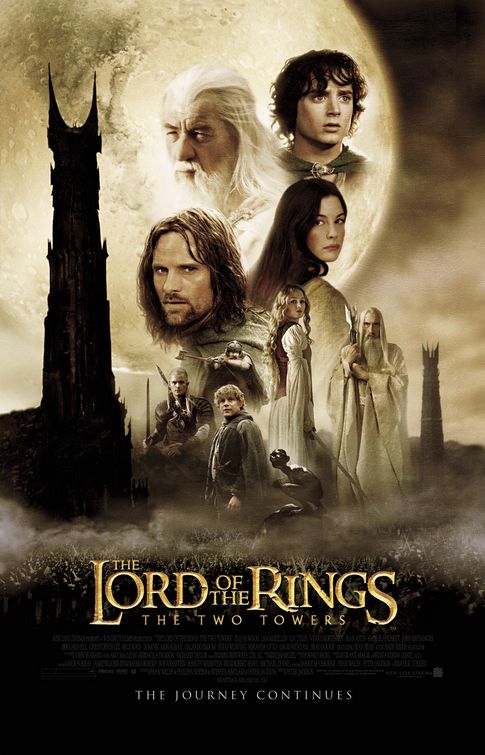 THE LORD OF THE RINGS: THE TWO TOWERS, part two of Tolkien’s epic masterpiece, chronicles what happens after Gandalf’s apparent death in THE FELLOWSHIP OF THE RING. The fellowship has been split up. Frodo and Sam are traveling into the evil land of Mordor to destroy the evil magic ring of power. They subdue the evil, but pitiful, creature Gollum, who knows a secret way. Meanwhile, Aragorn, Gimli and Legolas are chasing after the two other Hobbits, Merry and Pippin, who have been kidnapped by a band of creatures from the evil Lord Saruman. Saruman plans to unleash a huge army to destroy the human kingdom surrounding his own land.

To achieve a crisis, climax and resolution, director Peter Jackson has done a masterful job of telescoping events, adding elements and tweaking storylines. However, even though this is a four star movie, there are several points where all the elements don’t add up, where the plot wanders, and where the characters get in their own way. Finally, THE TWO TOWERS keeps to the very strong moral course Tolkien set, but it does not do as good a job highlighting the redemptive aspects.

(BBB, Env, C, Pa, O, VV, M) Very strong moral worldview with lots of dialogue and character situations reinforcing that worldview, as well as some environmental elements, some redemptive metaphorical elements, some New Age pagan elements (such as Gandalf’s resurrection being slightly over-written where they should have stayed with the book’s description), and occult elements that fit into the paganism inserted into the story (such as apparent telepathy by “Elf” creatures and prescient dreams); no foul language; strong action violence including sword fights, many arrows shot at creatures and humans and animals, spears thrown and thrust into soldiers’ bodies, scary looking and violent demon-like soldiers called orcs, orc’s arm chopped off during fight, cannibalism scene among demon-like orc soldiers, horses charge, explosion, wolf creatures attack people and horses but with not much blood and gore, and character battles large fiery demon to the death; no sex but passionate kissing, including woman kisses man while he’s lying down fully clothed; upper masculine nudity; no alcohol use; no smoking; and, problematic, mixed, borderline scene where supernatural humanoid “wizard” performs exorcism (with his magical or supernatural staff) on one man who’s been possessed by another supernatural “wizard” who has turned evil.

Last year, part one of Christian author J. R. R. Tolkien’s beloved masterpiece THE LORD OF THE RINGS exploded on movie screens all over the world. This year, part two, THE TWO TOWERS, started making cinematic history this Christmas season.

Part two is another wonderful Christmas present from Hollywood. Regrettably, however, it has a few more script and worldview problems. These problems slightly diminish Tolkien’s metaphorical Christian vision.

THE TWO TOWERS opens magnificently with an eye-popping shot of Gandalf, played by Ian McKellen, struggling with the Balrog demon as they tumble into a miles-long abyss. Suddenly, the movie cuts to the small Hobbit named Frodo, and his gardener, Sam, traveling to Lord Sauron’s evil kingdom, Mordor. They are on a mission to cast an evil, extremely powerful magic ring created by Sauron into the fiery flames of Mount Doom. Frodo and Sam manage to capture the creature Gollum, a former Hobbit who used to own the ring and is now trying to get it back. Despite Sam’s protestations, Frodo displays mercy toward this pitiful creature, who promises to help them find a secret, albeit dangerous, path into the land of Mordor.

As Frodo, Sam and Gollum make their way into this terrible land, their former companions, the human named Aragorn, the Dwarf, Gimli, and the Elf, Legolas, are chasing a small army of demon-like orcs. The orcs have kidnapped the other two Hobbits, Merry and Pippin, and are taking them to the evil “wizard,” Saruman, who is pretending to be in league with Sauron, though he really wants the powerful evil ring all for himself.

Before they can free Merry and Pippin, the pursuers run into horsemen from the human kingdom of Rohan. The horsemen say they have already defeated the small army of orcs. Aragorn, Gimli and Legolas think the Hobbits have died in the battle, but they go to make sure. They find that the Hobbits escaped during the battle to run into the dark and mysterious forest of Fangorn. There, the Hobbits discover an unexpected ally. Also, both they and Aragorn’s group uncover an exciting bit of good news – Gandalf has mysteriously been resurrected and “sent back” to help them, at the turning of the tide. Gandalf leads Aragorn, Legolas and Gimli into a desperate battle to save the Kingdom of Rohan, and its King, from Saruman’s evil machinations and massive armies.

While all of this happens, Gollum leads Frodo and Sam through the marshes of the dead. A couple surprises lie in store for them in the land of Mordor, not the least of which is Gollum’s apparent reform, which, however, teeters on the razor’s edge.

It is a known fact of scriptwriting, seldom discussed, that the second act of a script is the most difficult. Although some aficionados think the second book in THE LORD OF THE RINGS trilogy is the best, it is not easily translated into the dramatic elements of the cinematic arts. To achieve a crisis, climax and resolution, Peter Jackson and his team have done a yeoman’s job of telescoping events, adding several elements and tweaking storylines.

However, even though this is a four star movie, there are several points where all the elements don’t add up, where the plot wanders, and where the characters get in their own way which may distract a few viewers. Jackson’s rendition of THE TWO TOWERS may leave others in a fog of cinematic bliss.

It’s really hard to pick out one or two cast members, because practically everyone gives a very good performance. That said, the highlight of the acting this time around may be Viggo Mortensen’s strong performance as Aragorn, Liv Tyler as the Elf lady Arwen, Sean Astin as Sam, John Rhys-Davies as Gimli, and Andy Serkis as the voice of Gollum. Serkis also performed most of Gollum’s movements for the computer special effects. The computer effects give an excellent, naturalistic texture to Gollum’s body. They set the new standard for computer animation.

Although THE TWO TOWERS generally keeps to the strong moral course Tolkien set, it does not do as good a job of highlighting some of the redemptive aspects. For example, there’s a New Agey resurrection shot of Gandalf, whose hair and raiment have turned almost completely white from his experience of death and resurrection. The movie version also heightens the nascent environmentalist notions that appear in Tolkien’s masterpiece. Regrettably, this may encourage many people to divorce resurrection and respect for nature from the Christian fantasy context in which Tolkien placed them.

Even so, the moral message of THE TWO TOWERS has peculiar relevance for us today. Like the characters in Tolkien, we are faced today with an epic struggle against evil, not only against Islamic terrorism and terrorist states, but also against the evil within ourselves and within the daily world in which we live. THE TWO TOWERS suggests that war is sometimes necessary and even desirable. Like the character Wormtongue, however, who tries to convince the King of Rohan not to fight, there are lots of people telling us, don’t take a stand, be careful about angering those Muslims and Arabs, don’t mention anything about the Culture War, and, even, stop talking about Jesus Christ, God and the Bible because it offends people and makes them angry. Sorry, people, it’s time to decide which side you’re on, Good or Evil. As Jesus Christ said more than once, you’re either for God or against God, you’re either for evil or against evil. Thus, some issues are, indeed, black and white, and, sometimes, there is no middle ground.

THE TWO TOWERS contains many strong fighting scenes. Also, the creatures that Saruman and Sauron have bred are too scary for younger children, and many older children as well. Included among these elements are a very quick shot of an orc’s arm being cut off and cannibalism among the orcs, who also talk of tasting “man flesh” and eating the Hobbits. Tolkien’s book, however, also mentions some of these things. Like the movies, Tolkien’s LORD OF THE RINGS is mostly meant for teenagers and adults who love action adventure stories, including massive, exciting (and violent) battle scenes. The audience won’t find the kind of blood and gore, however, that occurs in movies like SAVING PRIVATE RYAN and WE WERE SOLDIERS.

Finally, like Tolkien’s book, Jackson’s version consists of cinematic parallel editing switching back and forth between different sub-plots. Although this is a time-honored technique of cinema with which D. W. Griffith amazed audiences during the age of silent movies, this technique is too choppy at times and a bit rushed, especially with all the running around that the characters do. These are small flaws, however, in an epic work that won’t be fully realized until Christmas next year, when New Line Cinema releases part three, THE RETURN OF THE KING.

Watch THE LORD OF THE RINGS: THE TWO TOWERS: