DIVINE SECRETS OF THE YA-YA SISTERHOOD 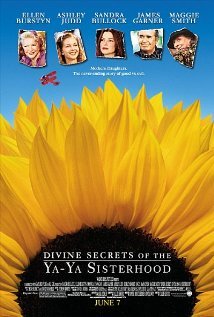 DIVINE SECRETS OF THE YA-YA SISTERHOOD is the story of “Sidda,” a bitter but famous lady who publicly reveals her family’s skeletons. Her enraged mother, Vivi, tries to get even with her, and Sidda fights back. Sidda’s fiancée tries to be a peacemaker but receives only rejection. Vivi’s lifelong buddies, the “Ya Ya sisters,” kidnap Sidda to enlighten her about her mother’s past. In various flashbacks, Vivi’s past comes to life in alternately delightful and disturbing portrayals. Sidda gains insight about her life, but will it be enough to quell the bitterness that has taken full root in her heart?

Despite its mixed worldview, some foul language and disturbing portrayals of alcoholism, DIVINE SECRETS shows how the sins of the parents are passed to the children. It accurately depicts the fruits of the alcoholic-minded family, with the offspring becoming “rage-aholics.” The movie is a fabulous study in avoiding “religion without relationship,” a stinging reminder of the pain of racism, and a beautiful picture of how forgiveness covers a multitude of sins. The movie should have shown that true healing from God, not just understanding and forgiveness, is crucial to a healthy spirit

(PaPa, O, Fe, C, Ab, BB, LLL, VV, AAA, DD, M) Pagan worldview and syncretism of Catholicism and pagan ritual with two mystical ceremonies involving blood pacts, chanting, vows of loyalty to death, etc., feminist elements, some Christian elements with numerous depictions of Catholicism, but portrayals include twisted, perverted, hyper fear-based, hyper religious, superstitious, fetish-oriented behaviors, void of true relationship with the One True God, yet the “sins of the (mothers),” passed down generationally, are clearly and correctly demonstrated according to true biblical patterns; many prayers and child sings a song with the lyrics, “God bless the moon and God bless me”; 48 obscenities and profanities; the violence of alcoholism was shown in rantings, belt whippings of children, etc.; no sex; one painting of naturalistic nudity; alcohol use, alcoholism and the violent fruits of this sin depicted in numerous and disturbing ways; smoking and drug abuse; and, miscellaneous questionable issues include portrayals of some men as weak, unhelpful, absent, and distant (though others are portrayed as faithful and enduring), and disturbing portrayals of Southern racism during the mid-1900s.

DIVINE SECRETS OF THE YA-YA SISTERHOOD begins with Siddalee “Sidda” Walker (Sandra Bullock), a famous but bitter actress, giving Time Magazine an interview that reveals her family’s skeletons. Sidda describes her mother as, “charming and wounded . . . alarmingly simple, then suddenly dark and complicated . . . leading a self-centered, God-forsaken life, but dancing her way through (the chaos).” Sidda’s mother, Vivi Abbott Walker (Ellen Burstyn), is horrified and embarrassed about the exposure and proceeds to get revenge in a number of hilarious ways – including sending her daughter childhood photos with her face burned out of them. She tells her friends that Sidda is “The biological fruit of my womb that rotted!” Sidda matches her mother, strike for strike, retaliating by sending her mother a wedding invitation with the time and location cut out.

Sidda’s fiancée, Connor (the charming Angus MacFadyen), tries to play peacemaker between the two volatile women but gets emotionally smashed in the fray. He is committed, however, and chooses to help get to the root of Sidda’s bitterness. He tells her, “I’m afraid that our kids will feel about you the way you feel about your mother.” Sidda is furious at his insight, and she accuses him of viewing her as “damaged goods,” soon calling off the wedding. The most committed ones in this process, however, are Vivi’s best friends, the “Ya Ya sisters,” (self-named at a childhood loyalty ceremony), who kidnap Sidda and whisk her off a thousand miles away to enlighten her about her mother’s strange past.

The ladies pull out a fascinating secret scrapbook that details the lives of the four women. Sidda soon sees that her mother was raised in a strict, hyper-religious, superstitious Catholic home with a half-mad mother, that she became an alcoholic, missed out on true love, and lived through a number of surprising and heart-wrenching traumas.

Through the journey, seen in a number of delightful and/or disturbing flashbacks, Sidda gains insight and understanding about her entire life. Will it be enough, however, to quell the bitterness that has taken full root in her heart? Is restoration possible with Vivi, and would a marriage to Connor be too risky? Can Vivi forgive her outrageously bold friends who have violated her privacy?

One interesting part about DIVINE SECRETS was its dramatic departure from the book – a good thing, in this case, because, as well as author Rebecca Wells writes (and despite her sacred Oprah nomination), she veers off course with this second novel. In fact, where Wells left the reader mired in boring details about a San Juan Island, director/screenwriter Callie Khouri moves her setting to Louisiana, with Sidda being “kidnapped” by the Ya Yas rather than receiving their visit. Khouri also turns boyfriend Connor into an Irishman, adding an extra dose of appeal.

The movie, like the novel, departs from a traditional chronological narrative by using continual flashbacks from Sidda’s and Vivi’s points of view. Rather than disturbing the pace, however, the flashbacks actually enhance the film by transporting us back to the forties when Vivi was a teenager, and to the sixties, when Sidda was a child. The audience sees the cruelty of Vivi’s own mother, the beau that Vivi lost to World War II and the disappointment of her marriage to Shep (played with wonderful aplomb by James Garner). The audience is also invited into the frightening childhood of Vivi’s children, who endured countless drunken evenings, one horrific beating and Vivi’s unexplained six-month departure to a psychiatric hospital.

In addition to the excellent dialogue, well-written screenplay and lush Louisiana setting, DIVINE SECRETS benefits from superb acting all around. As the Ya Yas, Maggie Smith, Shirley Knight and Fionnula Flannagan are distinctly and uniquely hysterical. Special mention goes to Smith, who not only carries off a Southern accent but also manages to convince us she was raised in the Bayou. Like her younger version (well-played by Ashley Judd), Ellen Burstyn elicits both anger and sympathy from her audience.

Seemingly about friendship, with the lifelong and admirable commitment of the Ya Yas appropriately highlighted, DIVINE SECRETS goes far deeper. As it explores the complex relationship between mothers and daughters, it demonstrates just how easily those ties can be broken through our own choices. Much depends on our ability to forgive one another.

The sad and disturbing part of the movie is its pagan worldview that touts secret ceremonies with chanting, blood pacts and soul ties. The movie mixes this paganism with “Christian” thought, portraying a perverted form of Catholicism with hyper-religious, void-of-relationship, obligatory prayers and rituals. One Catholic character is almost insane in her fear, guilt, suspicion, and condemnation of others.

Despite the numerous negative connotations, though, the movie does show sincere prayers to God, and there are songs of blessing and a background music track that has Christian lyrics. The biblical lessons are quite clear: unforgiveness mostly hurts the unforgiver; racism of any kind is hurtful and wrong; God answers prayer; love is not a feeling, but a decision to commit and endure; and, the entrance of God’s light on an issue brings life. There are many, many poignant scenes with the mother and daughter with which women’s hearts will immediately connect. As Sidda faces her past, the audience is invited to face ours. As she reconciles the dual version of her wounded but wound-inflicting mother, the audience my reconcile theirs.

Above any other movie in recent memory, this movie perfectly demonstrates how the Bible speaks of the sins of the parents being passed down to the children. Like the novel on which the movie’s based, writer and director Callie Khouri accurately depicts the fruits of the alcoholic-minded family, with the offspring becoming “rage-aholics.” The movie is a fabulous study in the terrible consequences of avoiding religiosity and living apart from a true relationship with God. It also is a stinging reminder of the pain of racism and a beautiful picture of how forgiveness covers a multitude of sins. The movie should have gone one step farther in showing that a personal relationship with Jesus Christ, not just mere understanding and forgiveness, is crucial to creating healthy family relationships.

DIVINE SECRETS may just be the biggest secret this summer. For those who may not be offended by the language and pagan-religious thought, the enlightening relational patterns that the Bible warns about just might outweigh the cringe factors and make the effort to watch the movie worth the trip.