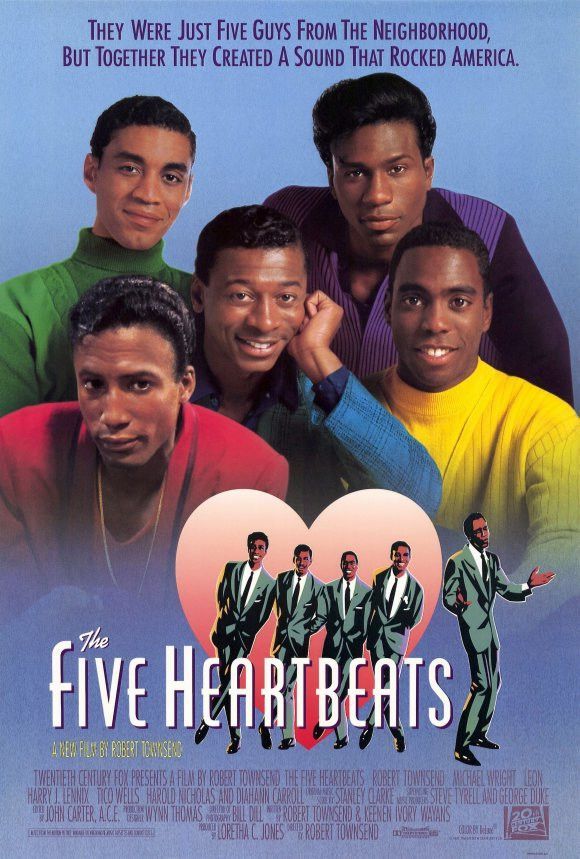 Five buddies smitten with the same dream of "making music" join forces as the '60s are unfolding, and experience various trials and heartaches as they battle their way to the top to become a Temptations-style success in 1967 and 1968.

THE FIVE HEARTBEATS features a Rhythm and Blues quintet of singers who rock their way through the 60s and 70s. It captures a sixties’ flavor in its smooth, musical arrangements, but contains gaps of dialogue and action during which the viewer has to “piece it all together.” These discontinuities, as well as a watered-down concept of the Church, detract considerably from the film.

A story is told of five buddies smitten with the same dream of “making music,” who join forces as the swinging sixties unfold. Experiencing various trials and heartaches, they battle their way to the top to become a Temptations-style success in 1967 and 1968.

Of course, being black, the Heartbeats must contend with the racial vagaries of the ’60s. On tour, for instance, they are limited to “Colored only” motels and restaurants. One funny episode does occur after their record becomes a hit: their record manager tries to replace their picture on the jacket with a white group to make it more saleable.

On their way to success, the Heartbeats sign with Big Red’s record company, and before long they have a hit single, “Nothing But Love.” They also acquire manager Jimmy Potter, who helps book and promote them. Big Red, however, plans to steal the group away from Jimmy, and a violent murder takes place when Big Red runs Jimmy down with his car.

Problems plague the group. Lead singer Ed suffers from alcoholism and egotistically decides to go solo. J.T. and Duck, the two brothers in the group, suffer a break in their relationship when J.T. makes out with Duck’s girl. Anthony, whose father is a preacher, leaves for the tour with his dad’s disapproval, but his mother tells him to bring home a gold record and gives him a Bible. At one of the tour stops, the Bible gets left near a pay phone.

By film’s end, the Heartbeats have gone their separate ways, but Anthony effects a reconciliation by inviting Duck to his father’s church. At church, following a sermon on God’s love and forgiveness, Duck spots a now-sober Ed singing in the choir. J.T. and Duck also manage to mend their ways.

THE FIVE HEARTBEATS tries to be many things at the same time. One minute, it is a buddy comedy; the next, an old-fashioned musical; then, a grim drama that confronts racism, exploitation and addiction.

Although this sounds good on paper, actually the film is quite flawed because of the disgusting sexual language and connotations that run throughout, and the lack of a coherent plot. To portray the average woman as a seductively dressed tramp inviting open sexual fondling and liaisons with total strangers is sordid and repulsive at best.

Such disgusting lifestyles, coupled with the seeming ineffectiveness of God to change people’s lives, make for a depressing film. Worst of all, the characters don’t realize that God is pure and holy. Consequently, their lives fall pathetically short of His glory.

The Prophet Jeremiah sums up when he says: “Were they ashamed when they had committed abomination? No! They were not at all ashamed; nor did they know how to blush” (6:15). In the final analysis, THE FIVE HEARTBEATS misses the rhythm of Truth.