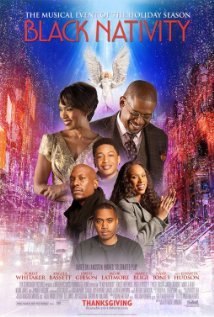 BLACK NATIVITY is a musical drama inspired by Langston Hughes’ play. The story follows Langston, a teenager living with his single mother in Baltimore. With Christmas right around the corner, Langston finds out he and his mother are being evicted from their home. Nowhere to go, his mother decides to send Langston alone to stay with his grandparents in Harlem. For some reason, Langston’s mother stopped speaking to them right before he was born. Her decision to send Langston to Harlem sparks tension, reveals secrets, and tests everyone’s faith.

(CCC, BBB, L, V, M) Very strong Christian, moral worldview extols God’s grace, forgiveness, prayer, reconciliation, redemption, faith, family, and Christ’s divinity, with a large portion taking place in a church during a Christmas program that includes readings from Scripture; one clear use of the “d” obscenity and another muddled use, one light profanity; no violence, but teenager does point a gun at a man intending to rob him but nothing; two implications of unwed pregnancies; no nudity; no alcohol; no smoking; main character tries to steal multiple times but fails, implied racism, teenager gets his backpack stolen, and a dysfunctional family that, however, finds reconciliation.

BLACK NATIVITY is a musical drama inspired by Langston Hughes’ play of the same name. It’s a brilliant, uplifting piece of filmmaking that highlights God’s Grace.

The story follows Langston, a teenager living with his single mother Naima (Jennifer Hudson) in Boston. With Christmas right around the corner, Langston finds out he and his mother are being evicted from their house. Nowhere to go, his mother decides to send Langston over to his grandparents. For some reason, she stopped speaking to them right before Langston’s birth. Langston protests his mom’s decision because he doesn’t even know his grandparents, but she decides it’s the best thing to do.

As the Reverend begins his annual Black Nativity musical program on Christmas Eve, Langston prepares his plan to get back home. But the reasons for his family’s separation starts to come to light and Langston’s motives begin to change.

BLACK NATIVITY is a moving, beautiful story that emphasizes Christian faith, family, and forgiveness. The cast does a wonderful job bringing life to their characters, including Jennifer Hudson as the mother, Forest Whitaker and Angela Bassett as the grandparents, and Jacob Latimore as the Langston. The cast does really well with all the musical numbers, which reveal their individual character’s emotions. The whole thing is brilliantly written and directed by Kasi Lemmons, an actress who previously directed EVE’S BAYOU (1997) and TALK TO ME (2007). The emotional high points come at the movie’s ending, which includes a musical dream sequence where Langston dreams of the Birth of Jesus talking place in Harlem as the church performers sing about God, Jesus, and the Nativity. The musical dream sequence is beautifully integrated with the theatricality of the church performance. It also makes a great transition for the movie’s climax, which resolves all the story’s conflicts in a beautiful, inspiring, and dramatically powerful way. That said, some viewers, especially those unfamiliar with the history and techniques of musical performance in movies, might find this musical sequence, and even the other musical numbers, off-putting. Of course, if you also really don’t like musicals, then BLACK NATIVITY is not the movie for you anyway.