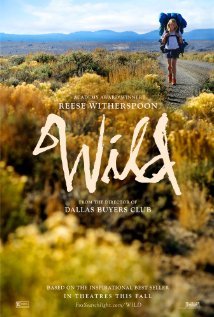 WILD is based on a true story. Reese Witherspoon plays a young divorced woman devastated by the death of her beloved mother at 45. Calling herself Cheryl Strayed, the woman cheats on her husband and becomes addicted to heroin. To purge her sordid response to her mother’s death, she decides to hike part of the Pacific Crest Trail, from the Mojave Desert in California to Northern Oregon. The long trek allows her to fully grieve for her mother and overcome her despair and some of her anger toward God, but it doesn’t lead her to Jesus.

The filmmakers do an impressive job jumping between the present and the past. The cinematography is, of course, gorgeous during the hiking scenes, but the flashbacks to the heroine’s promiscuous, sordid past are not so wonderful. Reese Witherspoon does an excellent job playing the extremes her character undergoes during the hiking scenes, but her self-destructive behavior during the flashback scenes have a “Look at me!” quality that detracts from her performance. WILD’s scenes of promiscuity, drug abuse and obscene language are excessive and warrant deep caution.

(PaPaPa, RoRo, FR, AbAb, B, C, FeFe, Ho, LLL, V, SSS, NNN, AA, DDD, M) Very strong pagan, somewhat mixed worldview with strong Romantic attitudes about young married woman just out of college becomes unhinged when her beloved mother suddenly dies at 45 from cancer, becomes promiscuous, starts doing heroin, then goes on a 1,000 mile hike to find herself and get rid of her destructive lifestyle, with some New Age implications and a scene where woman arrives at a bridge called Bridge of the Gods, woman is angry at God for her mother’s death, woman gets help from people on her trek and overcomes her destructive lifestyle, plus some unstated feminist elements as woman gets divorced and has an abortion and takes on a dangerous trek on her own and implied lesbian liaison; about 55 obscenities, three strong profanities and eight light profanities, plus brief gory shots of woman’s toenails coming off because her hiking boots are too small; brief violence limited to a flashback of abusive alcoholic father threatening to beat the main character when she was a young girl and forcing her mom to take her daughters on the run with her, a sick horse has to be shot and put down but not shown (only man pointing rifle is shown), and two creepy men come across woman in the middle of nowhere and appear ready to rape her but nothing happens beyond the creepy threat; several scenes of depicted adultery and fornication, implied lesbian liaison, a scene of foreplay leading to implied fornication, woman hiking alone carries condoms but throws away all but one, possible threats from men as woman hikes alone on trail; sex scene with full male nudity and shots of upper and rear female nudity, shots of upper male nudity; alcohol and brief drunkenness; flashbacks include shots of heroin abuse and woman wakes up in sleazy drug dens; and, lying and dysfunctional single motherhood.

WILD is based on the true story of a woman who hiked over 1000 miles from California to Northern Oregon to purge herself of bad behavior and bad memories after the sudden death of her beloved mother and a painful divorce. WILD is a mixed bag, going from sordid scenes of promiscuity and drug abuse to beautiful scenes of natural beauty and human renewal.

WILD follows the story of Cheryl Strayed (Reese Witherspoon), a wild woman who grew up largely without a father after her mother (Laura Dern) fled her abusive alcoholic husband when Cheryl was a young child. That combination of no father and domestic chaos rubbed off on her in a way that leads to a string of empty sexual encounters and an addiction to heroin before her husband of seven years confronts her, and they decide to divorce.

Once she has her divorce papers, Cheryl buys a ton of hiking and camping gear and sets off to hike part of the Pacific Coast Trail, from the Mojave Desert in California to Northern Oregon. She takes three months to do it and learns many life lessons and skills along the way as she is shown bouncing between her solo walk and occasional encounters with strangers. These scenes are mixed with her vivid and sad flashbacks to a lifetime of havoc with her abusive dad, sweet but unstable mom, and illicit sex and drug use. Her goal is to purge her past and become renewed.

Director Jean-Marc Vallee does an impressive job jumping between the present and the past. The cinematography is, of course, gorgeous during the hiking scenes, but the flashbacks to the heroine’s promiscuous, more sordid past are not so wonderful. Reese Witherspoon does an excellent job portraying the emotional and physical extremes her character undergoes during the hiking scenes, but her self-destructive behavior during the flashback scenes have a “Look at me!” quality that detracts from her performance.

Thematically, WILD is a tale of self-redemption. Cheryl, the heroine, realizes she must straighten out her life and end her sordid lifestyle. To do that, she sets out on a sojourn into the wilderness. Along the way, she survives many obstacles and gets help from unexpected sources. Ultimately, the movie comes to a mixed, ambiguous conclusion. The movie contains some references to God and some New Agey moments referring to the universe in a human way. Cheryl shows anger toward God because of her beloved mother’s sudden death. Eventually, she seems vaguely reconciled to God at the end of her journey, but the conclusion is too mixed and too vague. Also, although Cheryl leaves her sordid past behind, her journey is still a Romantic, selfish one. So, her story has some feminist connotations, especially when, before she decides to take her long hike, she decides to get an abortion when faced with an unwanted pregnancy. The extremes in her character, and the movie’s somewhat vague ending and excessive content, warrant deep, extreme caution. The scenes of promiscuity, drug abuse and obscene language are really strong.