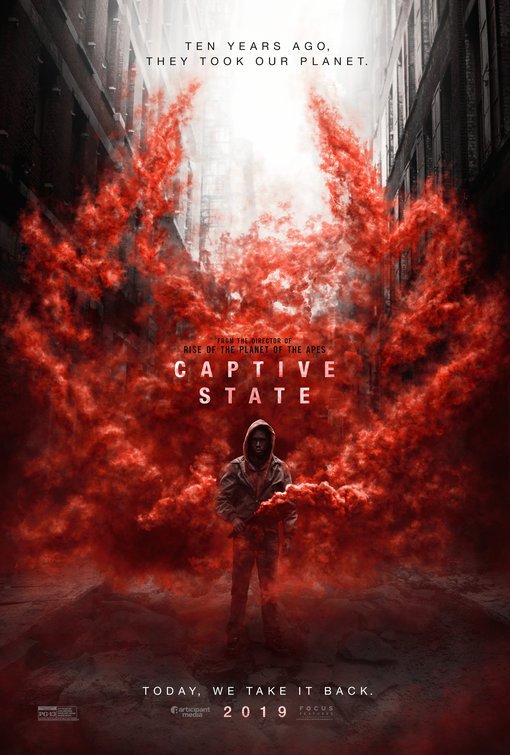 CAPTIVE STATE is a story about a city in complete chaos and ruin after an alien takeover. Apocalyptic violence leave the entire city under Martial Law. Two brothers join the insurgency to defeat the alien forces and its human police state, where citizens have no rights. The insurgent rebels carry out an underground plan to overthrow the aliens and win back freedom for all the citizens. The movie’s last few minutes are the best, where much of the plot is explained. The ending closes with a good plot twist. However, the audience is clueless about what’s happening otherwise.

CAPTIVE STATE has good special effects, including scary alien creatures. John Goodman delivers a decent performance. However, the storyline falls flat, and there are too many characters. CAPTIVE STATE contains some moral, patriotic, redemptive messages highlighting the importance of freedom, heroism, sacrificing for others, bravery when confronting evil, and protecting one’s family. However, it’s mixed with scenes involving a brothel, prostitutes, partial nudity, a brief bedroom scene, a scene with drag queens, violence, and strong but brief foul language. MOVIEGUIDE® advises extreme caution.

(Pa, CC, BB, PP, ACAC, HH, Ho, L, VV, SS, NN, D, M):
Dominant Worldview and Other Worldview Content/Elements:
Mixed pagan worldview with Christian, moral, patriotic messages about freedom, the importance of heroism, sacrificing yourself for the good of others, one of the main characters wears a cross around her neck, one scene shows part of the “underground” resistance takes place in an abandoned church, mixed with humanist elements such as one of the main characters is a prostitute and uses her “johns” to get important information to fight against the alien takeover, plus some references to cross dressing in a drag queen show
Foul Language:
Several obscenities include two “f” words and several “s” words
Violence:
Continuous violence with some blood such as bloody and war related battles and injuries, aliens vaporize humans, alien implants removed, explosions
Sex:
Brief sex scene under covers, brief drag queen show scene, and brothels and prostitution play a role in the plot
Nudity:
Partial rear and upper female nudity, and upper male nudity
Alcohol Use:
No alcohol use
Smoking and/or Drug Use and Abuse:
Some smoking and cigarettes used to carry secret messages; and,
Miscellaneous Immorality:
Use of prostitution to gather information about enemy forces.

CAPTIVE STATE opens with complete chaos. The city is in devastation and ruin. Buildings are leveled. Cars are on fire. People flood the streets screaming and yelling. Newspaper clippings and off-screen news reports detail the event as a complete alien takeover. The entire city is under Martial Law. As a family tries to flee the apocalyptic scene, aliens approach and annihilate the parents. The two brothers, Gabriel and Rave, are left alive in the backseat after they witness the murder of their parents.

Flash forward 10 years later. The younger brother, Gabriel, lives in a ghetto, Pilson, which is controlled by a police state. The older brother, Rafe, is a hero who’s presumed dead. Each citizen is bugged with a tracking chip in their neck. Neighborhood narcs and spy type birds watch and report every move as they keep Pilson residents from breaking any rules under the threat of death or deportation to another planet. The police state is run under the watchful eye of Officer William Mulligan, who’s played by John Goodman.

However, the aliens are concerned about a growing rebellion. Though at first Gabriel only wants to escape for himself and doesn’t want to be a “hero,” he decides to join the underground rebel force seeking to defeat the aliens. As the story progresses, the movie reveals a score of insurgents who have formed a secret network to combat the aliens and win back freedom for the people.

The problem is that the plan to overthrow the aliens is such a secret that neither the characters nor even the writers seem to know what it is. In the opening scene, viewers are given most of the information on the basic situation from newspaper clippings and off-screen television news reports. As the movie continues, more and more characters are revealed. However, most of them are under developed. The movie provides no clues as to where they come from, what their role is, or why they’re there, until the conclusion.

Also, there isn’t enough information given about the aliens to make their motivation clear or believable. In fact, the aliens don’t speak until the end. For the most part, they’re portrayed as unintelligent, animal-like killers.

Finally, the members of the insurgency seem to be running around in all directions performing secret tasks to complete a mission that the audience isn’t privy to knowing, while dodging random alien attacks and violence by the police state. Consequently, although the movie does a good job showing viewers what chaos looks like, the real chaos is in the plot.

There are some good acting moments by John Goodman in CAPTIVE STATE, and some touching exchanges between the brothers Gabriel and Rafe about the importance of family. CAPTIVE STATE also has some good special effects, including scary alien creatures.

The last few minutes of CAPTIVE STATE are probably the best, where much of the plot is explained. A good twist in the final scene adds to the ending’s power.

CAPTIVE STATE has a mixed worldview. There are Christian, moral messages throughout the movie about the importance of heroism and sacrificing yourself for the good of others. One of the main characters wears a cross around her neck. One scene shows part of the “underground” resistance takes place in an abandoned church. However, there are humanist elements, including the fact that one of the main characters is a prostitute and uses her “johns” to get important information to fight against the alien takeover. In a moral and biblical worldview, there is no justification to do something wrong in order to make something right.