CALLING ALL WRITERS! Win $15,000 For Your Spiritually Uplifting Screenplay 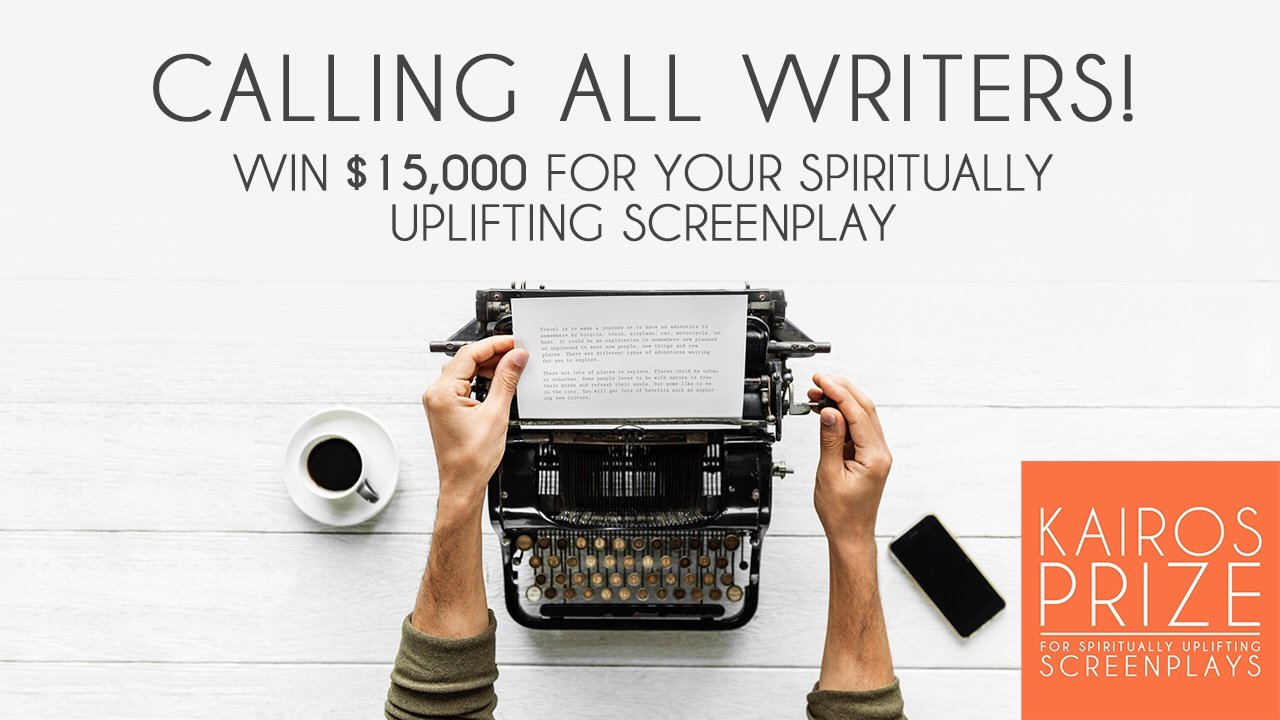 Movieguide® and Timothy Plan® are pleased to announce the opening of the 2020 Kairos Prize script competition.

“The Kairos Prizes are a wonderful way for aspiring script writers with a passion for God and family to get their work into the hands of some of the biggest names in the industry,” says Robert Baehr, Movieguide® chief operating officer.

In addition, the winners will receive a prize package from InkTip.com to include:  A six-month listing of your script on InkTip so that producers and reps can find you at InkTip Magazine and publication of your logline in InkTip’s bi-monthly publication, which is sent to 4,000+ producers, agents, and managers. InkTip helps writers sell their scripts and get representation. Producers have made more than 200 movies from scripts and writers they found through InkTip.

The screenplay name and log line of the winner and all finalists will be announced via press release to the media, trade publications, studios, agents, and producers, and will be posted at www.movieguide.org, which is viewed by millions of people a year!

Unlike mainstream script competitions, the Kairos Prizes focuses on spiritually uplifting screenplays leading to a greater increase in man’s love or understanding of God.

Established by Movieguide® in 2005, the primary purpose of the KAIROS PRIZES is to further the influence of moral and spiritual values within the movie and television industries. Seeking to promote a spiritually uplifting, redemptive worldview, the prizes were founded to inspire first-time and beginning screenwriters and established filmmakers to produce compelling, entertaining, spiritually uplifting scripts that result in a greater increase in people’s love or understanding of God.

Since its inception in 2005, the Kairos Prizes for Spiritually Uplifting Screenplays have given a voice to screenwriters and filmmakers worldwide who endeavor to create stories that are compelling, entertaining and spiritually uplifting.

Movieguide® presented its first Kairos Prizes in 2006 at the 14th Annual Movieguide® Awards in Beverly Hills, CA. Seeking to promote positive change in the motion picture industry, the primary purpose of the prize is to further the influence of moral and spiritual values within the entertainment industry as a whole. Movieguide®: The Family Guide to Movies and Entertainment has been on the forefront for more than 30 years, advocating positive and redeeming values in Hollywood.

Movieguide®’s Faith & Values Awards Gala and Report to the Entertainment Industry, now in its 28th year, recognizes the top movies and television programs that reflect the best the entertainment industry has to offer. While much attention has been granted those who are “in” the industry, Dr. Ted Baehr, founder and publisher of Movieguide®, wanted to bring encouragement and hope to new voices that would one day be writing Hollywood’s blockbusters.

Since their inaugural year in 2006, the Kairos Prizes have helped to open doors for its winners as they have gone on to sign with top agencies and have their scripts optioned and produced. The prize, now in its 15th season, has witnessed many winning scripts head into production. In 2017, a record number five Kairos winning screenplays either went into production or were released theatrically.

The Kairos Prizes are quickly becoming one of the most successful screenwriting competitions (faith-based or secular) with an exceedingly high winner to production ratio. The future of the Kairos Prizes is bright as Movieguide® continues its efforts to bring scripts to Hollywood that result in a greater increase in people’s love or understanding of God.