TIMMY FAILURE: MISTAKES WERE MADE

"Be Accountable for Your Actions" 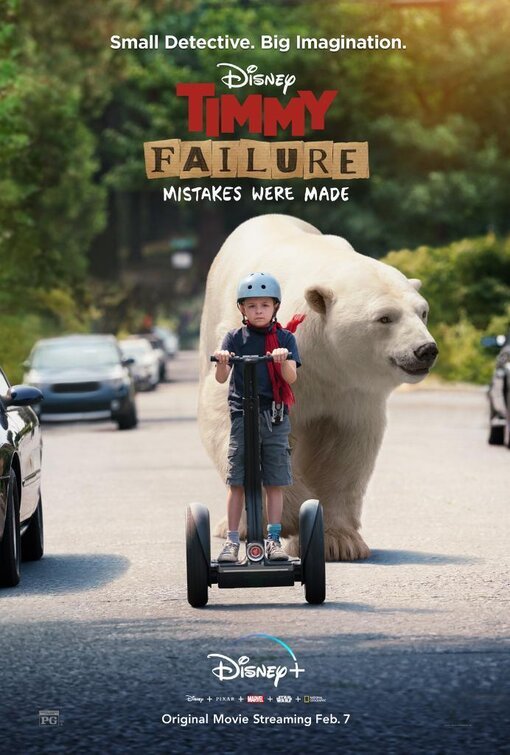 TIMMY FAILURE: MISTAKES WERE MADE follows 11-year-old Timmy Failure as he seeks to fight evil with his detective agency alongside with his imaginary polar bear named Total. The movie is set in Portland, Oregon where Timmy lives with his mother, Patty. One day, Timmy loses his mother’s Segway machine and sets out to find the culprit and bring them to justice.

Based on a series of popular children’s books, TIMMY FAILURE: MISTAKES WERE MADE is a fun watch. The dialogue is witty and engaging and will have viewers of all ages laughing frequently. The movie has a faith-friendly, morally uplifting worldview stressing helping others, responsibility, the need for accountability, and the importance of saying “I’m sorry.” In addition, church is mentioned a few times, and a character says, “God bless.” There are some light environmentalist, politically correct elements attributed to Portland’s liberal culture, such as fifth graders participating in “Animal Awareness Month,” signs that mention peace and the image of a rainbow stick. MOVIEGUIDE® advises caution for young children for TIMMY FAILURE because of some action violence, and some lying, disobedience and name-calling.

(CC, BB, E, PC, L, V, A, DD, M):
Dominant Worldview and Other Worldview Content/Elements:
Strong faith-friendly, morally uplifting worldview stresses helping others, responsibility, the need for accountability as children grow up, and the importance of saying “I’m sorry,” including church is mentioned a couple times when a character wins a prize at a church event, and a character says, “God bless,” with some light environmentalist elements as fifth grade students participate in “Animal Awareness Month, and some subtle politically correct moments mainly attributed to Portland’s liberal culture including a rainbow stick and signs that talk about peace and things of the like
Foul Language:
One “d” word, one “holy smokes,” a character swears on a polar bear, two mentions of being “screwed”
Violence:
Teenage character steals a swiss-army knife from his younger brother, imaginary polar bear mistakenly tries to eat an inflatable seal, character supposedly takes claws and a rabbit’s foot from animals but it’s not true, character jokingly threatens to kill someone, two adults smash mailboxes with baseballs, a van breaks through a character’s house, character runs into a door but doesn’t get too hurt, reference to a prisoner who’s murdered someone, a few light tussles, and a character punches a cop
Sex:
No sexual content
Nudity:
Two instances of upper make nudity
Alcohol Use:
In two scenes, adults drink beer with a meal
Smoking and/or Drug Use and Abuse:
Quick image shot of a marijuana shop in Portland;
Miscellaneous Immorality:
Sarcasm, disobedience, name-calling, and boy convinces girl to lie, and she in turn requires that he paints her nails.

TIMMY FAILURE: MISTAKES WERE MADE follows an 11-year-old named Timmy Failure as he seeks to fight evil with his detective agency alongside his imaginary polar bear pal named Total. TIMMY FAILURE is an endearing comedy that has a strong faith friendly, morally uplifting worldview stressing helping others, respect, accountability, and forgiveness. MOVIEGUIDE® advises caution for younger children for TIMMY FAILURE: MISTAKES WERE MADE.

Set in Portland, Oregon, the movie begins with a voiceover narration by the movie’s protagonist, Timmy Failure. Timmy is an 11-year-old boy with a passion for his detective agency, Total Failure, which he runs from his home office upstairs in his house. Timmy’s coworker is a polar bear named Total (hence the mane of the agency), who found his way to Portland from the Arctic. Although it appears only Timmy can see Total, the filmmakers play around with his existence.

One day, while Timmy is out using his mother’s Segway without her permission, the Segway goes missing. Timmy believes that the culprit of the heist are the “Russians” who are actually just normal Portlanders who look somewhat menacing because of their tattoos and everyday dress. Eventually, Timmy comes to believe that “The Nameless One,” a girl in his class, is working with the “Russians.”

Timmy calls upon his friend Rollo to help determine if “The Nameless One’s” dad, who’s in charge of a local bank, is helping her. Rollo reluctantly agrees to help Timmy, but things go sideways when their diversion at the bank fails.

Meanwhile, Timmy’s grades tank because he’s more interested in his agency than schoolwork and doesn’t want to go to middle school. Timmy’s classroom teacher, Mr. Crocus, takes on the villain role in Timmy’s mind. On the flip side, Timmy seems to enjoy talking to his school counselor (played by the comedian Craig Robinson). The counselor acts as a soundboard to Timmy’s ideas but also keeps a close eye on him.

Timmy’s mother Patty works multiple jobs as a single mother. One day, Timmy learns his mother is dating a parking meter patrol officer named Crispin. Crispin, like Timmy’s school counselor, indulges his imagination, but his mother eventually insists Timmy give up his agency in hopes that he will “grow up.”

While on a field trip to a historic dam, Timmy, Rollo and Total hatch a plan to make sure “The Nameless One” won’t cut the power to the entire city. Timmy breaks free of his classmates to see if indeed the “Nameless One” is enacting her plan. Mr. Crocus literally goes out on a ledge to save Timmy but thankfully, their peril is only for a brief minute.

With so many loose ends to tie up, how will Timmy go forward?

Based on a series of popular children’s books, TIMMY FAILURE: MISTAKES WERE MADE is a fun watch. Breaks between reality and Timmy’s imagination along with swipes in the editing make TIMMY FAILURE unique. The dialogue of TIMMY FAILURE is positively witty and engaging and will have audiences of all ages laughing frequently.

TIMMY FAILURE: MISTAKES WERE MADE follows a predominant moral worldview with emphasis on helping others, responsibility, the need for accountability as children grow up, and the importance of saying “I’m sorry.” Positively, church is mentioned a couple of times and a character says, “God bless.” There are some light environmentalist, politically correct elements attributed to Portland’s liberal culture, such as fifth grade students participating in “Animal Awareness Month,” signs that mention peace and the image of a rainbow stick. MOVIEGUIDE® advises caution for young children because of this, some light action violence, and some lying and disobedience.

Watch TIMMY FAILURE: MISTAKES WERE MADE: