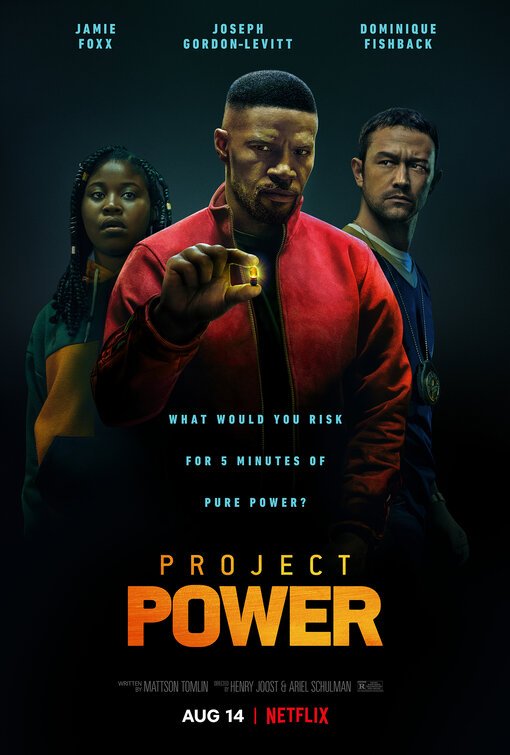 Set in New Orleans, PROJECT POWER is a science fiction thriller streaming on Netflix about a pill that gives people supernatural powers for five minutes. A man named Art goes looking for the supplier of these power pills, who’s kidnapped Art’s daughter. His search leads him to a teenage dealer named Robin, who’s been dealing the superpower pills to provide money for an operation her diabetic mother needs. Meanwhile, Frank, a police officer and friend of Robin’s, uncovers leads to find the pill supplier and protect the French Quarter from the bad guys.

PROJECT POWER has a good cast led by Oscar-winning actor Jamie Foxx. The production quality is top notch, with entertaining slow-motion action sequences and great CGI editing. The movie has a strong moral worldview. It stresses saving people from harm and extols friendship and family. However, the villains have a humanist lust for manipulating other people as they see fit, though it’s clear their demise is imminent. PROJECT POWER also has foul language and violence, and it contains references to evolution. MOVIEGUIDE® advises extreme caution for older teenagers and adults.

(BB, C, HH, EvEv, LLL, VVV, N, A, DD, M):
Dominant Worldview and Other Worldview Content/Elements:
Strong worldview where a father will do whatever it takes to protect his daughter and in the process winds up befriending and caring for a teenager who doesn’t have a father, sacrifice extolled, motherly love displayed, friendship depicted, villains display humanist characteristics as they want power for their own personal gain and don’t care who gets in their way in the process, plus evolution mentioned when it comes to a superpower pill’s ability to morph humans into more evolved versions of themselves, and animal evolution mentioned (for instance, villains claim that frogs will break their legs just to ward off predators and things of that sort as they try to convince skeptics that the power pills are worth taking
Foul Language:
25 obscenities (mainly “s” words and “h” words with a few uses of the “f” word including two times where it’s just mouthed by characters), four string profanities, a few “shut ups,” and one use of “frickin”
Violence:
Very strong violence includes guns used, man stabs someone in the throat with an ice sculpture, woman gets tazed, man’s fingers get shot off, and blood is shown, man with special powers is engulfed in fire until he gets blown up in an explosion, combat violence, multiple characters get clothes-lined, villain threatens to kill a minor
Sex:
No sex
Nudity:
Upper male nudity in two scenes
Alcohol Use:
One scene in a bar and one character who appears to have a bottle of alcohol in his hand, but it’s unclear if that’s the case
Smoking and/or Drug Use and Abuse:
Smoking in one scenes but it’s hardly noticeable, music with drug references, the premise of the movie revolves around experimental pills that get pushed in the same way other illicit drugs do; and,
Miscellaneous Immorality:
Greed.

PROJECT POWER is a science fiction thriller streaming on Netflix about a pill that gives people supernatural powers for five minutes. PROJECT POWER is top-notch entertainment, with a strong moral worldview stressing saving people from harm, but the villains showcase strong humanism with their lust for manipulating others as they see fit. The movie also has lots of foul language, violence and references to evolution.

Set in New Orleans, PROJECT POWER begins with an obvious notorious character named Biggie. Biggie tells a group of drug pushers about the genius of a pill that has the ability to give whoever takes it various extraordinary abilities. After the movie’s title flashes across the screen, viewers meet Art who appears to be flying under the radar. Art shows up at an apartment complex looking for a guy named Newt. They meet but quickly get into a fight as Newt seems to hide who the supplier is for the power pills he’s pushing around town. Newt winds up dying in an explosion, but Art gets hold of Newt’s cell phone, which leads him to a teenage girl named Robin.

Robin is a dealer for the power pills, but she’s doing so to earn some cash for her mother who has a diabetes and needs a major surgery. Robin is pals with a police officer named Frank who looks out for her on the streets but doesn’t condone her current line of work.

On meeting Robin, Art pretends to be Newt and winds up throwing her in the trunk of his car until she agrees to tell him what she knows about the power pill supplier. Robin is actually in the dark when it comes to the supplier’s identity, but she does know where to find more information.

Art and Robin arrive at a Chinese supermarket where Robin will supposedly meet a guy in the back of the store who can field her questions and give Art the information he needs to find the supplier. However, chaos ensues, and Art winds up getting injured.

Robin takes Art to a vet clinic and stitches up his wound. The two start to become friends instead of being skeptical of one another. Robin convinces Art to take her along with him in his quest to find the supplier if he’ll pay her for her time. Art reluctantly agrees and shares his motivation for wanting to find the supplier. The power pill dealers have kidnapped his daughter and are testing it on her in an undisclosed location.

Now, it’s only a matter of time before Art finds his daughter, and Frank catches up to Art and Robin to help them make the French Quarter safe from the bad guys.

PROJECT POWER has a strong moral worldview with an emphasis on saving people from harm, but the villains showcase strong humanism with their lust for manipulating other people as they see fit. There’s also lots of foul language and violence, and references to evolution. MOVIEGUIDE® advises extreme caution for older teenagers and adults.