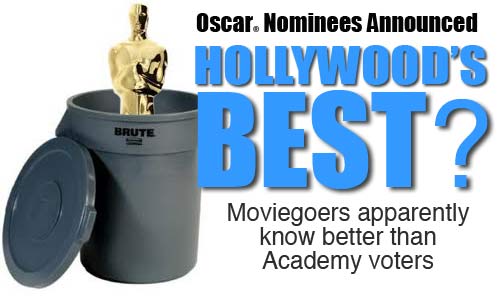 A Rated R Affair – The Academy Awards Announce Their Nominees

On Tuesday January 25, the Academy of Motion Picture Arts and Sciences announced their nominees for the 2010 Oscars®. The nominees for Best Picture are again expanded to ten, which makes room for audience favorites like the top moneymaking film of the year, the delightful TOY STORY 3, so that more people might watch the Oscars. Also in the list is the surprise hit of 2010, TRUE GRIT, with

But, true to form, six of the ten nominees are R-rated. Only one, TOY STORY 3, rose above an extreme caution (-2) from Movieguide®. Furthermore, two top vote getters, THE BLACK SWAN and THE KIDS ARE ALRIGHT, were rated abhorrent (-4) by Movieguide®. On the other hand, eight of them had redemptive and moral content, with five having clear Christian content.

The nominees for Best Actor are all from movies requiring extreme caution or worse. Three of the five are from R-rated movies. Even so, two have clear Christian content, and four have strong moral content. They are (in order of box office):

The nominees for Best Actress are even worse. Four of the five movies are R-rated, three are abhorrent (-4), one excessive (-3) and the other extreme caution (-2). There’ll be no BLIND SIDE best actress this year, but WINTER’S BONE is an excellent movie for mature audiences with Christian content and a redemptive theme, so Jennifer Lawrence is Movieguide®’s favorite out of a sorry lot (why Hailee Steinfeld wan’t nominated for TRUE GRIT is beyond us). In order of box office, the Best Actress nominees are:

The preponderance of movies with vile content reflects poorly on the values of the voting members of the Academy. So many of their nominees are so far from the tastes of the average American that it is easy to see why some filmmakers and distributors continue to pour out R-rated movies that tank at the box office. They like them even if the general public doesn’t.

Is it any wonder that fewer movie tickets were sold in 2010 than in any year since 1996? The clear box office winners of the year were primarily animated family films.

Once upon a time, the Academy voted THE SOUND OF MUSIC to be Best Picture. The Academy Awards have changed, but not for the better.