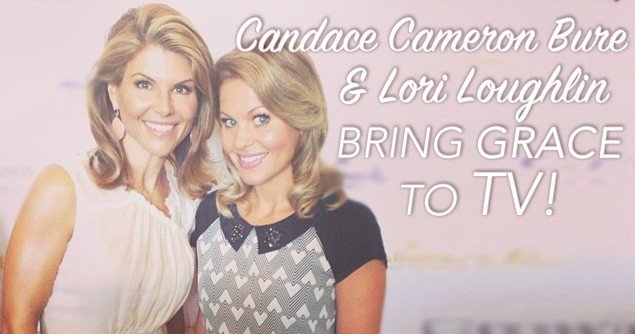 Two actresses, Candace Cameron Bure and Lori Laughlin, are bringing some grace to your TV screens.

The Associated Press reported Tuesday, “The decision to reboot the ABC comedy FULL HOUSE [starring Bure] on Netflix with most of the original cast came down to the idea of families watching TV together.”

The reboot, called FULLER HOUSE had its first taping last week. IMDb reports that the storyline for the new FULLER HOUSE concerns D.J. Tanner-Fuller (Candace Cameron Bure) as a widow and mother of two who’s expecting a third. When things become too much to handle, she asks her sister, Stephanie, and her best-friend, Kimmy, to help.

Also on Tuesday, the Hallmark Channel announced it’s bringing back the frontier series, WHEN CALLS THE HEART, starring Lori Loughlin, for a third season.

Bure is also in final negotiations as a regular co-host on “The View,” which would add to her already challenged schedule. Candace has been a guest co-host on “The View” and recently demonstrated grace related to the hot topic about the Oregon bakery resisting service based on their convictions, even after she received death threats.

Bure has written several books about balancing life in Hollywood with her Christian faith.

In one of her books, DANCING THROUGH LIFE: STEPS OF COURAGE AND CONVICTION, she reflects on the self-discovery that came through moving out of her comfort zone. She honestly shares the highs and lows, the roadblocks, and the personal victories. She opens her heart on the tough lessons she has learned about the following and more: grace, rejection, perfectionism, disappointment, accountability, and dealing with criticism. She shares how with God’s strength and the help of endless support from her family and friends, how she has stayed true to herself and has been able to publicly live out her Christian faith.

Bure, who was seen recently in the movie FAITH OF OUR FATHERS, has often been gracious and open about her commitment to faith and family, as has Lori Loughlin. Both women, who have been appreciated for many years as actors, are lovely female role models. They model excellence in their work, strength of character, and true beauty, which radiates from within. They both have been open in many public interviews about their Christian faith, love for their families, and their challenges of balancing these with their careers. They both have the admiration and support of many, who are glad that they will continue to bring their grace to Americans’ television screens.