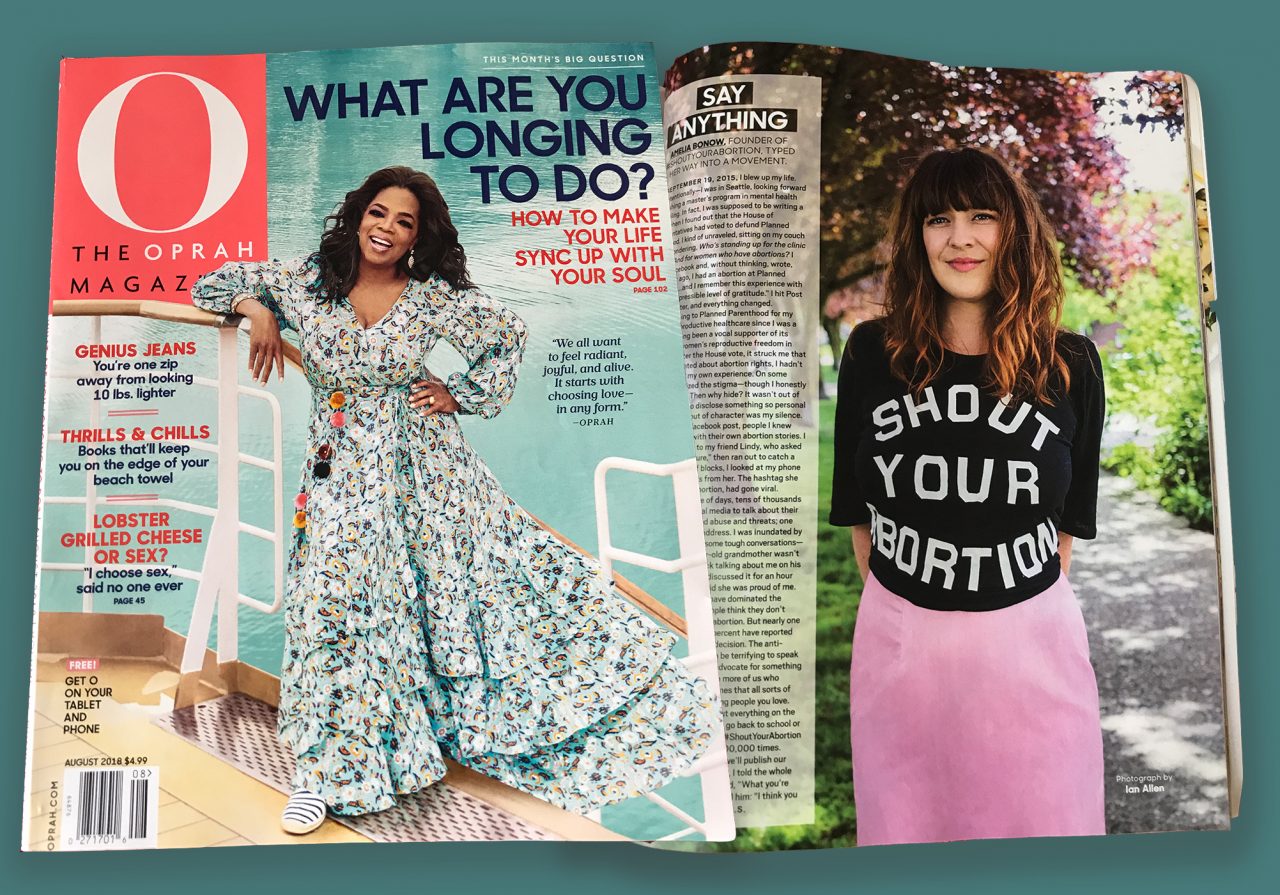 In July’s issue of Oprah’s O magazine, the media mogul highlighted Amelia Bonow and her activism for the pro-choice movement with the disturbing hashtag #ShoutYourAbortion.

Despite some of the positive things that Oprah does, like opening a boarding school in Africa or giving a slew of deserving teachers brand new cars, Oprah’s political activism is no doubt influenced by her new-age outlook on life.

Lindsay Elizabeth of Faithwire writes, “O magazine reaches ‘1 in 13 women in America,’ according to their own estimates. They have a grand total of 10 million magazine readers, another two million followers on social media and four million unique visitors to their website. That means millions of women have or will read this piece that unashamedly glorifies abortion as some ultimate statement of female empowerment.”

The article in O magazine details the beginnings of the #ShoutYourAbortion movement, “I was supposed to be writing a paper when I found out that the House of Representatives had voted to defund Planned Parenthood. I kind of unraveled, sitting on my couch crying, wondering, ‘Who’s standing up for the clinic workers? And for women who have abortions?’ I opened Facebook and, without thinking, wrote, ‘Like a year ago, I had an abortion at Planned Parenthood…and I remember this experience with a nearly inexpressible level of gratitude.’ I hit Post 153 words later, and everything changed.”

After this moment, Bonow’s friend Lindy came up with the hashtag #ShoutYourAbortion which O magazine is broadcasting.

Bonow continues in the article, “I was inundated by media requests and had some tough conversations— my conservative 93-year-old grandmother wasn’t thrilled to hear Glenn Beck talking about me on his radio show. But, after we discussed it for an hour on the phone, even she said she was proud of me.”

This sounds reminiscent of Michelle Wolf’s rant on THE BREAK WITH MICHELLE WOLF which was just canceled by Netflix, where the talk-show host proclaimed, “Abortion: I salute you, women if you need an abortion, get one! If you want one, get one.”

Since when did shouting about something you did make it ethically okay?

Of course, opening a dialogue for women who’ve undergone an abortion is good if it offers healing and restoration, but that doesn’t come when you’re celebrating the act. On the pro-life side, many are working to offer this healing, and if possible, offer women other opportunities so that they don’t get abortions in the first place.

Take David Pomerantz for instance. Pomerantz’s story first came to the scene in 2012 when he was 23 years old. Pomerantz had a mission: stop abortion using kindness. He and a team of trained sonographers offer women heading to abortion clinics pregnancy tests and ultrasounds in a high-tech, comfortable van parked next to the clinic. Now, that same idea has morphed into Save the Storks. The organization’s core values are innovation, love and faith according to their website. Praise God! The van idea morphed into what they call “the stork bus” of which they have 43. The mission is the same but now, five years later, the team has saved over 4,000 babies from abortion!

According to Save the Storks, an abortion takes place every 30 seconds. That’s two lives every minute and 120 every hour…. This is not God’s desire. God’s desire for us before sin entered the world was for us to dwell with him on earth forever? That’s why grief is so raw, and death so catastrophic.

Our culture seems to think that if enough people support their decisions, somehow that makes it okay because it makes them feel better. Historically, this open celebration of evil has excused the genocides of hundreds of millions of people. It’s not the first time the cries of the innocent have been overpowered by the shouts for their murder, but it needs to be the last. Pray for the Holy Spirit’s intercession.

This is why Pomerantz’s ministry is so important. While hundreds of thousands of people are shouting their abortions, through ultrasounds, these technicians are giving unborn babies a voice, and a connection to their mothers that they haven’t had.

Remember the sweet children’s song “Jesus Loves Me?” The lyrics read, “little ones to Him belong, they are weak, but He is strong… Yes, Jesus loves me, Yes Jesus loves me… the Bible tells me so.”

It may be rudimentary, but the song paints an accurate picture of Christ. He loves YOU and he loves our CHILDREN.

In fact, God spoke this very idea to Jeremiah, “Before I formed you in the womb I knew you, before you were born I set you apart; I appointed you as a prophet to the nations.” (Jeremiah 1:5 NIV)

But, before repentance can happen, we need to be diligent in spreading God’s desire for us to live abundantly through His son Jesus.

Pray that these celebrities with influence would turn from the evils of this world’s thinking.

Better yet, use this injustice as a means to tell people about Jesus. He died for us, so that we might know our sin and be reconciled to him. This gives us a tangible hope when stories like this come to light! Let’s start a #ShoutYourTransformation movement that highlights our stories of living in darkness, but being brought into the light of Jesus.