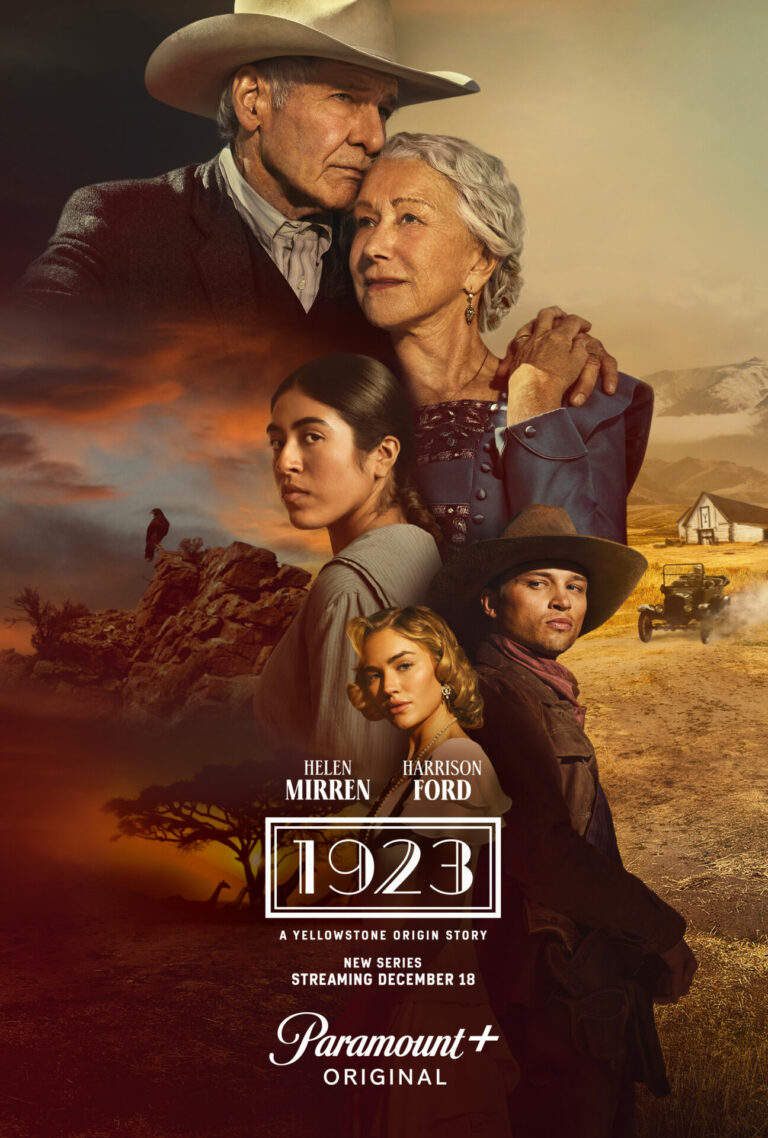 1923 is a prequel series on Paramount Plus to the popular series YELLOWSTONE starring Kevin Costner. Starring Harrison Ford and Helen Mirren, it shows how the Dutton family patriarch and matriarch face the threats of western expansion, Prohibition, fallout from World War I, and a terrible drought. All these are obstacles to Jacob and Cara Dutton, who are trying to keep their family, land and legacy intact. They have no children of their own but have raised two nephews. The younger nephew, Jack, works on the ranch with Jacob. The older nephew, a World War I veteran suffering PTSD, hunts man-eating lions and leopards in Kenya, Africa. Jacob worries about a possible range war between cattle ranchers and sheep ranchers during the drought.

1923: Episode One delivers high production values, beautiful vistas, great acting, and compelling storylines. The worldview, at least in the premiere episode, is much more morally uplifting than YELLOWSTONE. However, its violence, foul language and thematic elements warrant strong or extreme caution. A disturbing beginning and ending validates 1923’s opening remark that “Violence has always haunted this family.”

(BB, RoRo, Ab, LL, VV, A, D):
Dominant Worldview and Other Worldview Content/Elements:
A mix of moral and Romantic worldviews with The dominant worldview of the series seems to be a mix of the biblical moral and romanticism
Foul Language:
10 obscenities (including three “f” words), a Jesus profanity, a GD profanity, three light profanities, and several slurs against Irish people
Violence:
Strong and light violence includes a man runs through the woods with a revolver and is shot and falls, a woman with a shotgun then kills him with a second shot (no blood or gore but impact is seen) after they have to reload, fistfight between men, scenes of trench warfare with machine gun deaths and hand-to-hand combat (blood sprays and splatters in a few fleeting shots), nun raps the knuckles of teenage schoolgirl’s hands several times with a ruler, schoolgirl starts punching nun after nun starts hitting her in the head, priest raps nun’s knuckles and spanks schoolgirl on rear and upper thighs off screen (this causes bloody welts (droplets of blood fall onto wooden floor in bathhouse, images of a public boxing match in the streets, white hunter shoots a man-killing lion dead just before it leaps and falls on him, and Kenyan leopard attacks a young woman, and she falls from a tree with blood on her neck and dress after the animal’s shot dead, another leopard leaps at hunter
Sex:
No sex
Nudity:
No nudity, but there’s a bathing scene where nun in a Catholic boarding school instructs teenage Native American girls on bathing
Alcohol Use:
Men drink in a saloon;
Smoking and/or Drug Use and Abuse:
A few characters smoke cigars, but no drugs; and,
Miscellaneous Immorality:
Nothing else objectionable.

The pilot of 1923, Taylor Sheridan’s second prequel series to his Paramount smash hit, YELLOWSTONE, successfully kicks off this powerful new story. As the patriarch and matriarch of the Dutton family in the early 20th Century, Jacob (Harrison Ford) and Cara (Helen Mirren) face the threats of western expansion, fallout from the end of World War I, Prohibition, and economic depression in Montana, all obstacles to their keeping intact what is most precious to them, their family, their land and their legacy.

1923 starts more slowly in its premiere episode, which is in keeping with its time and setting. However, its disturbing beginning and conclusion completely validate the opening remark by Jacob’s niece that “Violence has always haunted this family.” The creators paint in broad strokes, showing viewers a difficult and complex world on America’s westward frontier recovering from World War I and facing the Great Depression, which started a decade earlier in Montana than in the rest of the country. They choose to focus on certain fundamental characters and themes and flesh these out a bit, waiting to provide nuance and bring other characters and themes into focus later in the series.

Six characters, Jacob Dutton, Cara Dutton, Jack Dutton (Darren Mann), Elizabeth Stafford (Michelle Randolph), Spencer Dutton (Brandon Skelnar), and Teonna Rainwater (Aminah Nieves), are the impressionistic face of the premiere. The episode shines light on three major topics – 1) Dutton family affairs, 2) local and world developments, and 3) the experience and role of marginalized minorities. Jacob’s young nephew, Jack, is a rancher who puts his job before his bride-to-be, to the detriment of their upcoming nuptials. Jack’s fiancée, Elizabeth, is struggling to come to grips with what it means to be a Montana rancher’s wife. Her mother-in-law, Cara Dutton, helps her grasp the great and terrible gift that such a life offers. Jacob’s nephew Spencer, a veteran of The Great War, has his own demons to wrestle while he tracks down man-eating lions and leopards in Kenya. Jacob is worried about the prolonged drought, his cattle and the range war that may come from the drought and conflict with some sheep farmers. Teonna is a young rebellious American Indian woman taken from her home and placed in a harsh Catholic boarding school. Meanwhile, Cara’s infectious wit and wisdom and Jacob’s steadfastness in the face of a swelling sea of troubles draw viewers to them, into the story of their relationship and into the tale being woven. This is a cinematic tapestry which leaves viewers on the edge of their seats in anticipation of Episode Two.

Production values in 1923: Episode One are of the highest quality. The series captures the feel of 1920s Montana, which was still in many ways a Wild West, as well as any other Hollywood western from the past. The dusty streets choking those who walk them, most every man carrying “a big iron [gun] on his hip,” rowdy town hall meetings filled with racial slurs aimed at the local Irish population, the temperance banshees badgering those outside the saloon, the early effects of the Great Depression with men struggling for their livelihood in animal husbandry, and the ever-present danger of an explosive range war are all aesthetically accurate and convincing. The sandy lighting, up close and personal camera work, and sprawling mountain vistas are up to YELLOWSTONE’s standards.

The first episode seems to present a mix of biblical morality and Romanticism. Set in the 1920s, a time when the Christian worldview was stronger in the US and when most people acknowledged, at least nominally, the truth of Scripture, 1923 is far more acceptable and watchable from the standpoint of a biblical worldview than its two predecessor series. However, there are some telltale signs of postmodernism present. The only sign of allegiance for all the characters so far is a belief in the power of romantic love or in what they do personally. Though much of Jacob’s life has been an exercise in heroism, there’s no sign that he attributes the source of his heroic actions to God. There’s also a very marked negative view of the Catholic Church as an institution without mercy or charity and devoid of the Grace of Christ. This is on full display in the harsh treatment the Native American girl Teonna receives at the local Catholic church and school.

Foul language in 1923 is more restrained so far than in its predecessor series, YELLOWSTONE, but there are three “f” words and two strong profanities. Episode One also has some strong violence, with some blood. So, MOVIEGUIDE® advises strong or extreme caution for the first episode.

To sum up, 1923’s premiere episode makes for an auspicious, compelling debit. It’s also more acceptable for media-wise viewers than YELLOWSTONE. However, it remains to be seen where the creators will take the story.