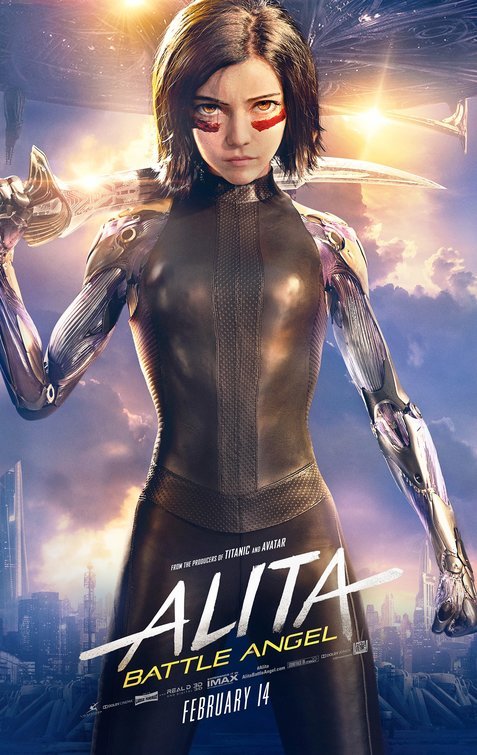 ALITA: BATTLE ANGEL is a science fiction thriller based on Japanese comic books. Alita is a female cyborg who wakes up in Iron City after years off the grid. She must unearth memories of her past while fighting evil in combat and navigating her affection for the people she meets along the way. It turns out Alita has unique fighting abilities ingrained in her that those in power will stop at nothing to control. If she can stay out of their grasp, she could be the key to saving her friends, her new family and the world she’s grown to love.

ALITA: BATTLE ANGEL has impressive special effects and thrilling action sequences that will entertain science fiction fans. However, the story is too complicated, making the movie seem longer than it is. Happily, though, it has a strong Christian worldview about fighting evil and injustice. At one point, Alita and her new friend Hugo find refuge in a church. ALITA: BATTLE ANGEL has some foul language and lots of action violence. For these reasons, MOVIEGUIDE® advises caution for older children and teenagers.

(CC, BB, Ro, PC, L, VV, N, A, M):
Dominant Worldview and Other Worldview Content/Elements:
Strong Christian, moral worldview with dollops of Christian theology, discussions of good vs. evil with heroine declaring, “I will not stand by in the presence of evil,” references to a “fall” with bad consequences, discussion of choosing good over evil, heroine and her romantic interest hide in an abandoned church and find protection, villain says “I’d rather rule in Hell than serve in Heaven” (echoing Satan’s comment in John Milton’s classic Christian poem PARADISE LOST), character mentions there was no peace in revenge, woman repents of a greed and selfishness that were in conflict with her occupation as a doctor and mother, mixed with some light Romantic elements where heroine mentions focusing on dreams and being together no matter what, plus a light politically correct moment where guns aren’t allowed in a city;
Foul Language:
Six obscenities and one light profanity;
Violence:
Strong depictions of violence, talk of murder, many intense fight scenes between cyborgs and humans, stabbing depicted, cyborg character gets face sliced off, beheadings depicted, red (human) and blue (cyborg) blood depicted, dog killed, but death not depicted;
Sex:
No sex, but teenage characters kiss in a few scenes, and a cyborg character is shown in suggestive fishnet stockings;
Nudity:
Upper male nudity, and cyborg characters wear armor that shows off their natural figures;
Alcohol Use:
Alcohol depicted, characters drink in bar, character mentions having a light hangover;
Smoking and/or Drug Use and Abuse:
No smoking or drugs; and,
Miscellaneous Immorality:
Lying, evil, greed, anger.

Set 500 years in the future, ALITA: BATTLE ANGEL follows a female cyborg warrior named Alita who wakens in a post-apocalyptic world where she must learn who she truly is while navigating a world of injustice.

In the 23rd Century, Earth underwent “the Fall,” a shattering war that halted all technological progress and left a society where every last shred of technology is repurposed and the strong prey on the weak. Three hundred years later, rich melting pot of survivors lives in in Iron City, a city full of ordinary people and cybernetically-enhanced humans living side-by-side in the shadow of Zalem, the last of the great Sky cities. Iron City is an oppressed factory town where the people crank out goods for the invisible elites living in Zalem.

While walking around in the wasteland underneath Zalem, Dr. Ido (Christoph Waltz) finds the head and shoulders of a female, barely alive. Taking her home with him, he fashions her head to a mechanical body he’s created and calls her “little angel.” Dr. Ido explains to her that her brain is very human although her new body isn’t. He gives her the name “Alita” and explains a brief history of Iron City.

Shortly thereafter, Alita spectacularly saves a dog from getting run over by a robot in the middle of the street. A young man named Hugo notices Alita’s amazing skills and begins a conversation with her.

As Alita learns to navigate her new life and the treacherous streets of Iron City, Dr. Ido tries to shield her from her mysterious history. Meanwhile, her street-smart new friend, Hugo, offers instead to help trigger her memories. However, it is only when the deadly and corrupt forces that run the city, headed by Vector and Dr. Ido’s ex-wife, come after her and Ido that Alita discovers a clue to her past. It turns out she has unique fighting abilities ingrained in her that those in power will stop at nothing to control. If she can stay out of their grasp, she could be the key to saving her friends, her new family and the world she’s grown to love.

ALITA: BATTLE ANGEL has some impressive special effects and thrilling action sequences that will entertain science fiction fans. Christoph Waltz gives a solid performance, different than his usual typecasting as the villain, and Rosa Salasa is compelling as Alita. However, the story and characters are a little too complicated, making the movie seem longer than it actually is.

Happily, ALITA: BATTLE ANGEL has a strong Christian worldview that evokes many allegorical messages. For example, the movie’s references to “the fall” stress the corruption of power and sin. At one point, Alita says, “I will not stand by in the presence of evil.” At another point, she and Hugo hide in an abandoned church and find protection. Also, in one scene, the villain, Vector, says, “I’d rather rule in Hell than serve in Heaven.” His comment echoes Satan’s comment in John Milton’s classic Christian poem PARADISE LOST. ALITA also touches on the idea of indulgences or buying your way into heaven. For example, in the story, different characters are trying to buy their way into Zalem, the sky city. Eventually, Dr. Ido’s wife sees the error of her greed and desires to be different.

ALITA also has some light Romantic elements centering on Alita’s budding romance with Hugo. The movie also has some foul language and lots of action violence. For these reasons, MOVIEGUIDE® advises caution for older children and teenagers.