AVATAR: THE WAY OF WATER 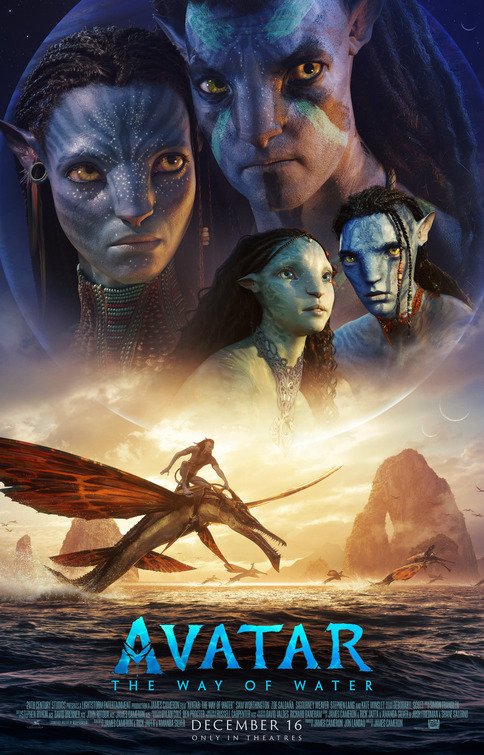 AVATAR: THE WAY OF WATER is James Cameron’s long-awaited sequel to his blockbuster 2009 movie. In the story, Jake must protect his new wife and family on Pandora from a cloned avatar of his nemesis from the first movie. A new army of Earth invaders has ordered the cloned soldier to capture or kill Jake, to stop the native resistance to Earth’s takeover of Pandora. His fight against Jake ranges from the forests of Pandora to a beautiful paradise of ocean atolls.

AVATAR: THE WAY OF WATER has lots of action and jeopardy. Also, the ocean and underwater scenes are incredible. Apparently, the actors and crew had to learn how to hold their breath under water to shoot those scenes. The main theme of THE WAY OF WATER is family. Also, Jake repeatedly says a father’s duty is to “protect his family.” However, the movie has a fair amount of foul language, partial nudity, and lots of action violence and combat. AVATAR: THE WAY OF WATER contains false pantheistic theology, references and prayers to “The Great Mother” and some politically correct environmentalism.

(PaPa, BB, FRFR, O, PCPC, EE, AP, LLL, VV, S, NN, M):
Dominant Worldview and Other Worldview Content/Elements:
Strong eclectic pagan worldview with strong moral pro-family elements celebrating family and fathers (the hero repeatedly says a father’s duty is to protect his family), marred by false religious elements promoting pantheistic ideas and including references and prayers to “The Great Mother,” characters have occult visions of dead people in three or so scenes, and there’s some politically correct environmentalism that worships the Creation, plus the bad guys are Marines
Foul Language:
26 obscenities (including some “s” words), one muddled profanity sounds like it could be “God” or GD, and one OMG profanity
Violence:
Strong, frequent action violence includes many gunfights, natives kill soldiers with arrows and guns, soldiers kill natives with guns and explosions, a man gets his arm trapped underneath a taught rope on a boat and his arm goes flying when the boat goes flying (shot in long distance), hand-to-hand combat and wrestling, knife fights, people are in danger of drowning multiple times, humans deliberately kill an intelligent alien whale type creature to harvest a brain fluid worth millions of dollars because it prolongs human life, villain holds knife and gun at a child’s head two times or more, explosions, humans deliberately burn down a large part of a forest, aliens attack and wreck a human supply train, giant intelligent whale-type creature attacks men and boat by landing on it and swinging his fins and tail, and children’s lives are often put in jeopardy
Sex:
No sex other than native costumes that partially expose aliens’ rear ends
Nudity:
Many scenes with upper male nudity, male and female aliens display partial rear nudity due to skimpy loincloths, and a pregnant female shows brief partial upper nudity
Alcohol Use:
No alcohol use
Smoking and/or Drug Use and Abuse:
No smoking or drugs; and,
Miscellaneous Immorality:
Bad guys want to take over a large moon instead of share it with the native population, bad guy kidnaps children and holds them hostage to capture their father, and hero’s wife threatens a boy’s life when villain holds a knife at her daughter’s throat instead of wife finding a better solution to saving her daughter’s life.

AVATAR: THE WAY OF WATER is James Cameron’s long-awaited sequel to his blockbuster movie and tells how Jake tries to protect his new wife and family on Pandora, from a cloned avatar of his nemesis from the first movie, who’s been ordered to kill Jake and stop the native resistance to Earth’s takeover of Pandora. AVATAR: THE WAY OF WATER is filled with amazing action and settings and with strong pro-family elements that celebrate fathers, but it still contains false pantheistic theology, references and prayers to “The Great Mother” and some politically correct environmentalism.

The movie opens with Jake narrating how he and his wife, Neytiri, now have a family. Their children include two sons, Netayam and Lo’ak, their young daughter, Tuk, and an adopted teenage daughter, Kiri, whose mother was Jake’s friend, Grace (Grace died in the first movie). Often tagging along with Jake’s children is a boy named Spider, a human child who was left behind as a toddler on Pandora because he was too young to return to Earth.

Jake and his family live with their clan in the thick forest. They lead an idyllic life for more than 10 years. One day, however, the “Sky People” from Earth return. Immediately upon landing, the Earthlings burn down much of the forest. Jake’s family and the clan flee to a cave system in the Hallelujah Mountains.

However, the humans send a team of highly trained, nine-foot-tall Pandoran clones who’ve been given the memories of real humans whose DNA has been recombined with Pandoran DNA. Leading the team is Col. Miles Quaritch, a Pandoran avatar clone of the nemesis that Jake killed in the first movie. The team’s mission is to capture Jake alive or kill him, because of his leadership abilities and knowledge of Earth military tactics.

When Quaritch’s team threatens the lives of Jake’s children if he doesn’t surrender, Jake decides to move his family across the ocean to one of the water clans living in the distant ocean atolls. He seeks refuge for his family with the Metkayina clan.

However, Jake’s children have problems fitting in with the water clan. Even worse, Qauritch is still intent on tracking down Jake.

AVATAR: THE WAY OF WATER has lots of action and jeopardy. Also, the ocean and underwater scenes are absolutely incredible. Apparently, the actors and crew had to learn how to hold their breath under water for several minutes to shoot many of those scenes. Reportedly, Kate Winslet, who plays the water clan’s Queen, learned to hold her breath for more than seven minutes!

The main theme of THE WAY OF WATER is family. Also, Jake repeatedly says a father’s duty is to “protect his family.” This theme even becomes part of the human boy Spider’s story.

Despite this, AVATAR: THE WAY OF WATER also contains pantheistic theology, references and prayers to “The Great Mother” and some politically correct environmentalism. Many modern radical environmentalists lean toward the pantheistic “Gaia myth” of Earth and its ecosystem. The Bible tells us, however, that the God of the Universe has ordered his human creation to establish a dominion of stewardship over Earth, not to worship it but to cultivate and develop it and its resources.

AVATAR: THE WAY OF WATER has many cinematic wonders, but the movie’s false religion isn’t so wonderful. The movie also contains a sightly excessive amount of foul language, some partial nudity, and a lot of gun violence and combat. Also, for the record, the human bodies in the movie look realistic, but the blue and green bodies of the Pandoran natives still look like they’re animated, not real.