"What Kind of Person Do You Want to Be?" 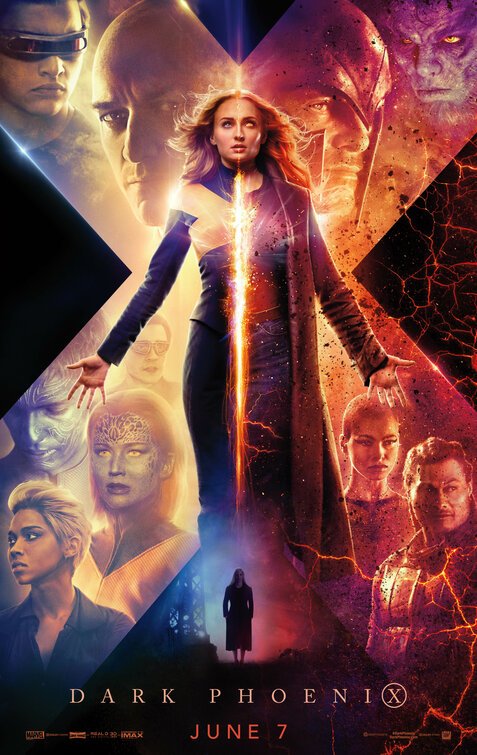 DARK PHOENIX finishes the X-MEN series in an exciting but somewhat uninspired way where Jean Grey, a powerful telekinetic and telepathic mutant, gains new powers that make her a threat to her friends and the world. In 1992, Jean Grey, while on an X-men mission in space, intakes a powerful cosmic force that gives her so much power, it begins to change her, and she can’t control it. A group of alien shapeshifters tracking the cosmic force want to harness it for themselves so they can destroy Earth and make it their home. Will the X-men be able to help their friend and stop this foe?

DARK PHOENIX is serviceable fun, with good action and a few decent performances, but the villain is terrible, and the movie isn’t everything it could’ve been. Like many X-MEN movies, there’s an underlying worldview of paganism the world the filmmakers have built, but this movie also has a strong moral, redemptive message of sacrifice, forgiveness, redemption, and self-control. Sadly, though, there’s some strong foul language and intense violence that warrant a strong caution for DARK PHOENIX.

(BB, C, Pa, Ev, LL, VV, A, M):
Dominant Worldview and Other Worldview Content/Elements:
Strong moral worldview with redemptive elements sends an anti-vengeance message along with moral, redemptive elements extolling sacrifice, redemption, helping others, and self-control, mitigated by some pagan worldview elements mentioning the universe was created by a floating cosmic force and some evolution comments
Foul Language:
Seven obscenities (including one “f” word) and five profanities (including a strong JC and GD)
Violence:
Moderate action violence, sometimes intense, with many science-fiction fight scenes with mutants using their various powers against each other, many explosions, characters are thrown, one person is violently impaled with a sharp piece of wood, another person is stabbed with metallic shrapnel shards, people disintegrate and are stabbed, a very intense car crash kills a woman
Sex:
No sexual content, but unmarried characters kiss
Nudity:
No nudity
Alcohol Use:
Charles Xavier is almost always seen drinking whiskey, so it could be surmised he’s an alcoholic
Smoking and/or Drug Use and Abuse:
No smoking or drug use; and,
Miscellaneous Immorality:
Lying, which isn’t condoned, however.

DARK PHOENIX finishes the X-MEN series in an exciting but somewhat uninspired way where Jean Grey, a powerful telekinetic and telepathic mutant, gains new powers that make her a threat to her friends and the world.

In 1992, Charles Xavier (James McAvoy), who’s wheelchair bound, runs his school for young mutants who have special abilities. He also has his X-men, a team of trained mutants who come to the rescue when the President of the United States calls. The team includes Raven/Mystique (Jennifer Lawrence) and her boyfriend, the scientist Hank McCoy/Beast, Jean Grey, and her boyfriend Scott Summers/Cyclops, plus Storm, Nightcrawler and Quicksilver.

When the United States launches a space shuttle into space, something goes wrong as they enter into orbit. The President calls Professor Xavier and asks if they can save them, so Xavier sends his team to the rescue. In space, the X-men see a cosmic force heading in the direction of the spaceship with the astronauts. With the help of Nightcrawler’s teleportation abilities and Quicksilver’s speed, they are able to save the astronauts. However, Jean Grey gets stuck in the spaceship and the cosmic force hits her and consumes her, causing an explosion. To everyone’s shock, Jean doesn’t die, and she’s taken home unharmed.

When Hank does some testing on Jean, he finds that her power levels have spiked off the chart. She claims she feels fine, great even, but begins to act strangely. Not soon after, she accidently unleashes her power at a school party. This accident hurts some of the other kids at the school, including her boyfriend Scott. Also, her powers begin to break down mental walls that Professor Xavier had telekinetically put up protecting Jean from the truth that she caused her mother’s death when she was a little girl, and her father didn’t want her anymore. Jean’s new strength overpowers Xavier’s powers. She decides to leave the school to find out who she is, and what was never told to her about her past.

Meanwhile, an alien race of shapeshifters arrives on earth. These shapeshifters were following the cosmic force and saw it enter Jean’s body in space. This cosmic force is described as the spark that brought life to the universe and can bring destruction as well. The alien shapeshifters want to harness the force for themselves so they can destroy Earth and build a new home on it.

Jean learns the truth about how Professor Xavier lied to her and no longer trusts anyone. As her powers grow more uncontrollable, she accidently kills a dear friend who wanted to help. Can the X-men save Jean?

DARK PHOENIX poses the most common existential question found in cinematic storytelling: Who am I? One could argue every other X-MEN movie posed the same question, since it’s the central theme of mutants trying to discover their place in the world. DARK PHOENIX being the last X-MEN movie made by 21st Century Fox (Disney purchased the major studio for over $70 billion) tries to resolve the identity crisis of some fan favorite characters before closing this version of their story. Is Jean Grey someone who chooses power over family? Is Charles Xavier someone who lies to people he loves, thinking it’s better for them? Will Hank choose vengeance over forgiveness? Can Erik/Magneto be someone who doesn’t kill? These are the questions the main characters must answer for themselves.

The weakest point of DARK PHOENIX is that the villainous alien shapeshifter, portrayed by Jessica Chastain, is so vague, uninteresting and half-baked, it’s hard to care where the climax is going. Chastain, who’s a terrific actress, is entirely unused by the director and gives a performance that pretty much anyone else could’ve done. While a few performances are strong, such as Fassbender as Magneto and McAvoy as Charles Xavier, most of the young X-men team are served wooden dialogue. Many viewers will walk away missing the characters from the original X-MEN movies.

Writer/Director Simon Kinberg brings an ample amount of action, and a different style to the series that works well with the story, but it’s hard not to wish the movie was more than it was. As pure X-MEN entertainment goes, however, DARK PHOENIX, flaws and all, is serviceable fun.

Like many of the X-MEN movies, there’s a current of paganism in the mutant world the filmmakers have built. The cosmic force that gives power to Jean is described as the force that created the universe, and, if wielded, gives god-like power to create other universes. This “force” isn’t given much more explanation. The mutants also are described as “more evolved.” While that is the underlying worldview, the overt message in the movie is predominately moral, using traditional biblical values. Jean Grey talks about not being what others want her to be and evolving, but in the context of becoming a better, more moral and self-controlled person. The movie is also anti-vengeance and has strong themes of sacrifice, forgiveness and redemption.

The objectionable content of DARK PHOENIX is hit and miss. While there’s quite a bit less foul language than previous X-MEN movies and other recent Marvel movies, there are two unfortunate misuses of Christ’s name and an “f” word. The violence is also quite intense at times, with a few deaths, major injuries and other action that isn’t appropriate for younger viewers. All in all, strong caution is advised for DARK PHOENIX.