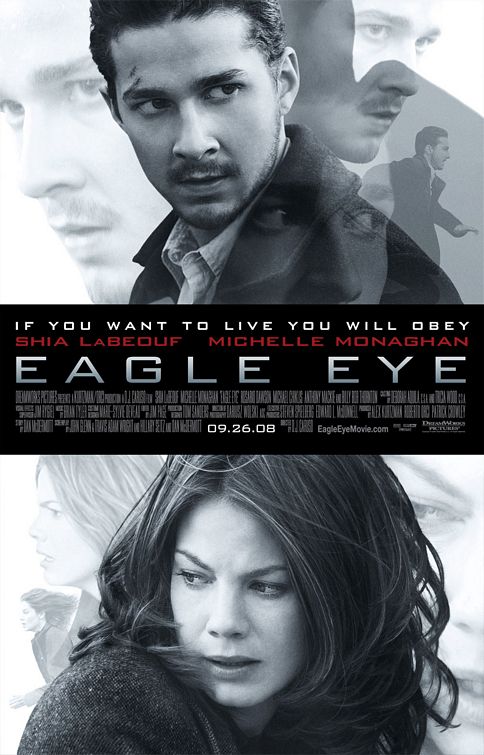 EAGLE EYE stars Shia LeBeouf as Jerry, an average guy who gets involved in a plot to kill the President and other heads of state. After getting him into trouble with the FBI, a strange female voice throws him together with a single mother, Rachel. Rachel is given a new kind of explosive device disguised as a diamond necklace, while her son holds the triggering device in his trumpet. The female voice uses the technology of everyday life to track and control their every move. Everything comes to a head when her son’s band is supposed to play for the President and Congress.

EAGLE EYE is one of those entertaining action movies that doesn’t quite satisfy. It has a lot of good direction and acting, but somebody forgot to connect the plot points. Also, the movie has some strong moral and redemptive points, but there is too much foul language and there is intense action violence that warrants a strong caution. Also, the movie’s anti-War on Terror theme can be interpreted in either a liberal or a conservative way. The worst failure, however, is the jumping conflict and the trick ending.

(C, BB, PC, LLL, VV, A, M) Light Christian worldview where hero is willing to sacrifice himself to save the nation with some strong moral points such as refusing to be blackmailed into killing someone, accepting consequences of your actions, paying your bills, etc., including a negative view of Homeland Security which could be interpreted in two different ways but probably would delight politically correct liberals, though conservatives also should be upset about government growth and intrusion; 31 obscenities and nine profanities; plenty of action violence including jumping from buildings, extremely violent car chases, machines used to kill people, man electrocuted and remains of fried body shown, but not an extreme amount of blood; minor kissing at end; no nudity; alcohol use; no smoking; and, blackmail, bullying, and intense interrogations.

EAGLE EYE is one of those entertaining action movies that, like a bucket of buttered popcorn, doesn’t quite satisfy after it’s finished. EAGLE EYE does have a lot of potential, good direction and good acting, but somebody forgot to connect the plot points.

The movie opens in the Middle East with incredible U.S. technical intelligence possibly identifying a terrorist at a Muslim funeral in a small village. The Secretary of Defense is not convinced by the 51% identification, but the President does not want to let another terrorist get away. So, using sophisticated modern technology, they blow up the group.

Cut to Jerry Shaw, an average guy who works at a copy shop, who suddenly is called to his twin brother’s funeral. His twin brother excelled at everything, so much so that Jerry says his twin brother had a rocket strapped on his back. In rebellion, Jerry dropped out of Stanford and makes a little bit of extra change by playing cards.

After the funeral, some strange things start to happen. Jerry’s formerly empty bank account has hundreds of thousands of dollars in it. His small apartment is stuffed with the latest military gear. And, he gets a call from a strange female voice to run immediately from the FBI. Being a contrarian, he hesitates and gets captured.

Cut to Rachel, a single mother, who’s putting her musically gifted son on a train with the rest of his band to go to Washington, D.C. to play for the President. Rachel gets a phone call from the strange female voice telling her she has to do what she’s told or her son will die.

The female voice springs Jerry from the FBI prison while he’s being interrogated by Tom, a tough older FBI agent who doesn’t really understand new technology, played by Billy Bob Thornton. Jerry is directed to Rachel, who’s driving an unmarked Porsche. Now, both are fleeing from the FBI, the Secret Service, and the Air Force while following the female voice’s instructions.

At the same time, a new crystal weapon that looks like a diamond and can blow up a football field is stolen from the Defense Department, along with the trigger, a sonic device. An Arab music store owner is directed by the female voice to put the trigger in Rachel’s son’s trumpet. Then, the Arab is directed to pick up Rachel and Jerry. When he refuses to drive them, he is electrocuted in the middle of nowhere by high wires.

Everywhere that Rachel and Jerry go, technology takes over. Stop lights change inexplicably, construction cranes move to protect them, subway trains stop and back up, and other people’s cell phones ring with messages for them. This is cyber hacking to the extreme.

Meanwhile, a female Air Force investigator looking into the death of Jerry’s brother is taken by the Secretary of Defense to their secret unmarked Pentagon basement, where they’ve developed an all-knowing, all-seeing computer to monitor everything in the world. The computer’s eye reminds one of the computer in WALL*E, or the computer Hal in 2001: A SPACE ODYSSEY. Soon, the computer, Aria, is controlling everything. The computer is ticked off that she advised against killing the people at the Muslim funeral, so she has a program called Guillotine to kill the 20 top people in the United States government, including the president because they violated the Constitution.

Jerry’s brother found out about this and put a voice lock on Aria. Jerry is similar enough biologically that he can remove the voice lock so that Aria can decapitate the government. Rachel is given the diamond necklace that can blow Washington to smithereens. Everything comes to a head, when her son’s band is supposed to play for the President and Congress.

EAGLE EYE may do well at the box office. It certainly has some strong, redemptive and moral points. A funeral scene is powerful, and the moral themes are noteworthy. The theme of sacrificing yourself for others also is powerful, but it is cut short by a trick ending. The anti-War on Terror and anti-Homeland Security theme can be interpreted in either a liberal or a conservative way and will annoy some people.

To make the special effects more real, the filmmakers went back to real car chases rather than CGI, and it works. The acting is good, especially Billy Bob Thornton and Shia LeBeouf. The directing is fast-paced and entertaining.

Regrettably, there’s too much foul language. The worst failure, however, is the jumping conflict and plot holes, especially the trick ending. With all the attempt at realism to turn this sci-fi story into science fact, it never quite gets to the science fact stage because of plot holes that could have been fixed easily.

Even so, for mature audiences, EAGLE EYE is an entertaining ride, especially in IMAX.