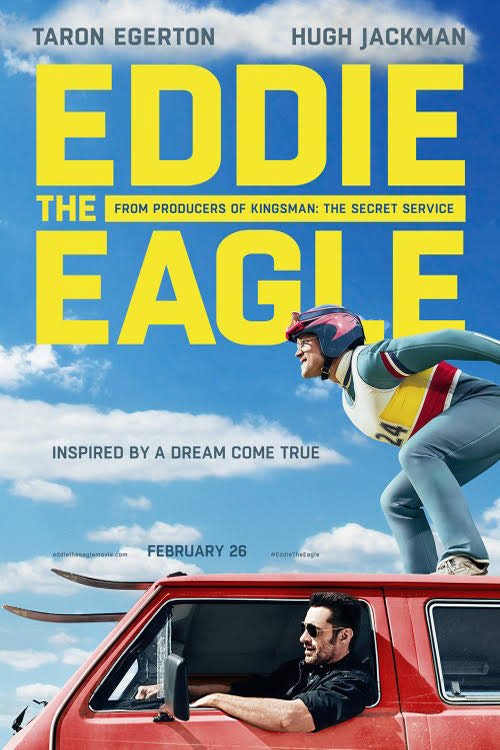 Based on true events, EDDIE THE EAGLE tells the story of Eddie Edwards. As a young boy, Eddie wears a leg brace and thick glasses. He’s obsessed with representing England in the Olympics and tries some sports, but he’s a disaster. Eddie settles on ski jumping. That’s because Britain has no ski jumping team, which means he’s virtually guaranteed to qualify for the Olympics if he can jump the required distance. Eddie begins training, but others mock him. Just when he’s about to give up hope, he meets a former jumping champion with an alcohol problem, who admires Eddie’s nerve and persistence.

EDDIE THE EAGLE pulls off a remarkable balance between comedy and inspirational sports movie. Family plays an important role in the plot and character arcs. The performances, especially by Taron Egerton as Eddie, are uniformly excellent. EDDIE THE EAGLE has a strong moral, redemptive worldview. As a result of all this, EDDIE THE EAGLE succeeds in creating a delightful blend that’s rarely been achieved so successfully. Caution is advised for older children for some drunkenness and mild, brief suggestive content.

(BBB, PP, C, V, S, N, AA, D, M) Very strong moral worldview, with strong patriotic elements and some inspirational, redemptive content about sacrifice, perseverance and overcoming scorn and humiliation, with a positive story about eventual reconciliation between father and his son; no foul language; some falls while ski jumping and fight with two punches thrown, and one punch lands; no depicted sex, but a woman who apparently has slept with other athletes mildly suggests she’d sleep with title character, but he cluelessly ignores the offer; upper male nudity and partial rear nudity in sauna; alcohol use and drunkenness, but title character helps his coach overcome his drinking problem; smoking; and, father doesn’t think much of title character’s dreams but they reconcile in the end, and title character suffers taunts and insults from others but overcomes them.

EDDIE THE EAGLE is the true story of Eddie Edwards, a young British man who overcame severe athletic ineptitude, the scorn of other athletes and lack of support from his own father to become a national hero in the 1988 Olympics. EDDIE THE EAGLE is a delightful movie with a very strong moral worldview, but there is some drunkenness and mild suggestive content in one scene. So, caution is advised for older children.

The movie opens on the childhood of Eddie (Taron Egerton), who has a leg brace as a young boy and wears thick glasses. Eddie’s obsessed with representing England in the Olympics and tries a few sports where he’s a total disaster. Eddie finally settles on being a ski jumper because Britain has no ski jumping team, meaning he’s virtually guaranteed to qualify for the Olympics if he only jumps the required distance for eligibility.

Eddie has such unflappable resolve that even numerous crashes don’t faze him or make him want to quit jumping. His father, a plasterer who’s never understood his son’s athletic dreams, orders him to give up. However, Eddie’s mom sneaks him some money and the keys to his dad’s van while urging him to go for his dreams.

At the main ski jump training school in Germany, Eddie develops a rivalry with Norwegian skiers and their coach, who all mock him. He’s disheartened to find that the other British Olympic athletes and coaches disrespect him as well. Just as he’s about to give up hope, he meets Bronson Peary (Hugh Jackman), former British Olympic ski jumper, who blew his career because of a drinking problem.

Peary takes pity on Eddie and admires his drive and determination. So, the two men team up for a string of inventive, entertaining training exercises while crisscrossing Europe for qualifying matches. The suspense and comedy involved in showing how far Eddie will go, and if Bronson can redeem himself as well, drive the movie to a very satisfying conclusion.

EDDIE THE EAGLE pulls off a remarkable balance between comedy and inspirational sports movie, succeeding in creating a blend that’s rarely been achieved so successfully before this. The stars, especially Taron Egerton in a role that’s unrecognizably different than his star turn in last year’s abhorrent spy movie, KINGSMAN: THE SECRET SERVICE, are uniformly terrific and entertaining to watch. The movie has a strong moral, redemptive worldview. Also, the conflict between the title character and his father has a positive, poignant resolution, as do the character arcs of Eddie and his troubled coach. Add in the fact that EDDIE THE EAGLE has no detectable foul language and only a couple of passing, mild sexual references, and you have a delightful movie that will attract media-wise parents, teenagers and discerning adults hungry for uplifting entertainment.

Rent or Buy EDDIE THE EAGLE: