"A Simple Yet Compelling Take on Jane Austen’s Final Novel" 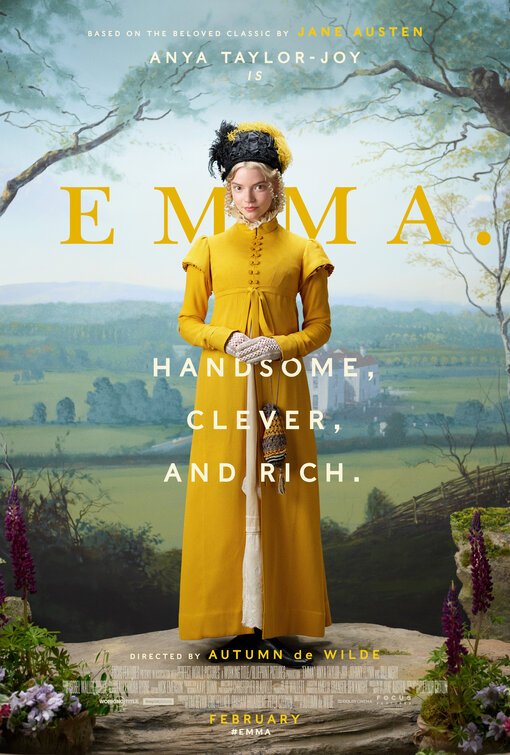 EMMA. (2020), the newest adaptation of Jane Austen’s last novel, follows the misguided matchmaking efforts of a beautiful young socialite who lives in the English countryside with her wealthy father. Emma Woodhouse spends her evenings sitting by the fire with her father. During the day, she meddles in the love lives of her neighbors. While playing matchmaker for her best friend, Emma learns she’s been misguided when the intentions of several suitors take unexpected turns. Emma’s perfect world may collapse as she’s forced to confront her own flaws and find the meaning of love.

EMMA. (2020) is a straightforward depiction of Austen’s novel. The characters are likable. The story is perfectly punctuated by droll humor. Sadly, the real drama doesn’t kick in until more than halfway through the movie. Christian faith and values are part of Emma’s story. Other than a scene with some brief partial nudity, there’s not much else of concern. The movie shows the class system of England as the aristocracy constantly looks down on the lower tiers of society. Due to the partial nudity, caution is recommended.

(CC, BB, Ab, N, A, M)
Dominant Worldview and Other Worldview Content/Elements:
Strong Christian, moral worldview where characters express remorse for any wrongdoing and some scenes feature hymns being sung and gatherings in church for weddings, plus some British class warfare with some rich people looking down on the lower classes
Foul Language:
No foul language
Violence:
No violence
Sex:
No sexual content
Nudity:
Partial brief rear nudity of a man as he gets dressed
Alcohol Use:
Some drinking wine at dinner or parties
Smoking and/or Drug Use and Abuse:
No smoking or drugs; and,
Miscellaneous Immorality:
A character’s feelings are hurt when she’s undeservedly criticized, one character is a gossip, and one character becomes envious of another.

EMMA. [the period is part of the title] (2020), the newest adaptation of Jane Austen’s last novel, follows the often misguided matchmaking endeavors of Emma Woodhouse, a young socialite who lives in the English countryside with her wealthy father.

“Emma Woodhouse, handsome, clever, and rich, with a comfortable home and happy disposition, seemed to unite some of the best blessings of existence; and had lived nearly twenty-one years in the world with very little to distress or vex her.” That is how the movie opens, with the opening words of Austen’s novel, followed by the main title overlaying an augur image of Emma walking down the central hallway of her home, clad in her white robe and carrying a bouquet of flowers freshly picked from the garden. She delivers them to her governess, who’s to be married that very afternoon, and leaves the Woodhouse estate, a departure that signals the beginning of adulthood for Emma.

With her mother dead and her sister living in another town with a husband and children, Emma spends evenings with her aging father by the majestic fireplace of their opulent home. She’s regularly called on by neighbor George Knightly, a young man who fancies Emma, but also enjoys knocking her down a peg or two when she adopts a slightly superior attitude, which happens often. As a member of the British aristocracy, there’s not much for Emma to do other than meddle in the love lives of the townsfolk. She takes a particularly difficult case under her wing in school girl Harriet Smith, who has eyes for a reputable farmer. However, Emma disapproves, deeming the farmer not worthy of Harriet’s time.

Instead, Emma tries to set up Harriet with a few other eligible bachelors, but eventually learns she’s a poor judge of affection and intention when Harriet ends up in quite a pickle. Rounding out Emma’s troubles are the loquacious yet warm-hearted Miss Bates who’s never short of any gossip and insists on seeking out Emma’s company, and Jane Fairfax, a young woman who Emma considers a rival of sorts when she returns from her time away.

Although she seems willing to put her own romance on hold in an effort to help others, Emma slyly flirts with the possibilities of marriage herself, but feels a loyalty to her father who’s asked her not to leave him. Her perfect world is in danger of caving in around her when she’s forced to confront her own flaws and contend with the often nebulous notion of love.

EMMA. (2020) is a straightforward depiction of Austen’s final novel, not daring to venture too far outside of the 19th Century English countryside the book painted. It depicts the idealized aristocratic society that readers would see in their mind’s eye with a soft and gentle tone, both in style and substance. The characters are all likable enough, and the movie is punctuated by humorous drollery at the right times, which serves to endear the characters even more. In true Austen fashion, the movie is extremely chatty. So, it takes quite a bit of work to keep up with the story as much of it is told in subtle dialogue that blends in with everything else.

Sadly, the real drama doesn’t start until more than an hour and-a-half of the movie has passed, and all of Emma’s crises occur at once. This gives the movie an unbalanced feel.

Other than a scene with some brief partial nudity (George Knightly’s backside is shown as he dresses for the day), there’s not much else of concern. Like Austen’s novel, the movie shows the class system of England as the aristocracy constantly looks down on the lower tiers of society, although it’s not altogether unwelcoming. Emma does befriend Harriet, and Harriet eventually teaches Emma about life in the end. The characters are all generally upstanding and express remorse at any wrongdoing. A few scenes have a church choir singing hymns as the soundtrack, reminding viewers that Christian faith and morals play a part in the conduct of their society. Due to the partial naturalistic nudity, caution is advised for younger children.