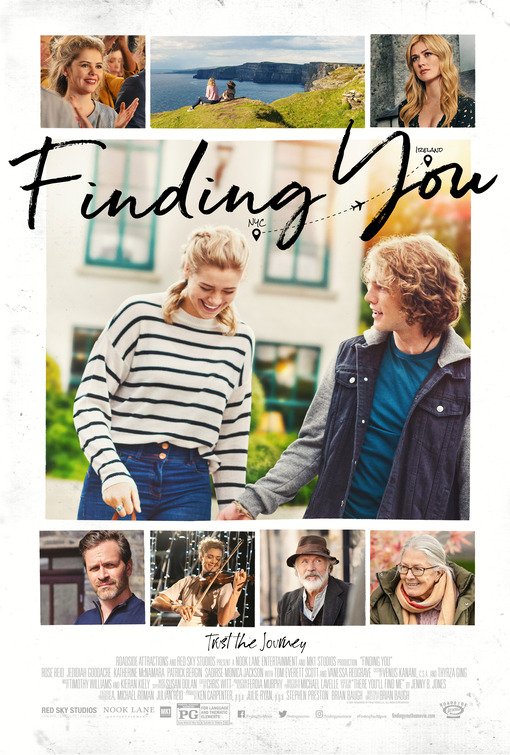 FINDING YOU is a romantic drama. When Finley doesn’t do well in her violin audition, she decides to visit Ireland for inspiration. On the plane, Finley sits next to Beckett, a Hollywood heartthrob who’s shooting a movie in the same small Irish town she’s visiting. Finley judges Beckett as having a big ego. When she gets to the Bed and Breakfast where she’s staying, she finds Beckett’s also staying there. Meanwhile, Finley finds an old sketchbook where her late brother drew a local cross he found. Finley longs to find the cross and the peace her brother had before he died.

FINDING YOU is a fun, wholesome movie. The storyline is a typical romance, and the acting isn’t award winning, but the movie’s enjoyable. FINDING YOU has a strong Christian worldview about loving and helping others, forgiveness, finding peace in the Cross of Christ, and seeking purpose and meaning in life beyond fame and fortune. FINDING YOU shows a wholesome romantic relationship media-wise viewers will enjoy. MOVIEGUIDE® advises caution for younger children because of light, brief foul language and a bar scene.

(CC, BB, L, S, N, AA, M): Strong Christian, biblical worldview with a cross shown and a Bible verse reference promotes finding love, loving and helping others, forgiveness, finding peace in the Cross of Christ, and finding purpose and meaning in life beyond fame and fortune
Foul Language:
Five light obscenities
Violence:
No depicted violence, but woman passes away, woman mentions the death of her husband and how he was abusive, but she had to learn to forgive him,
Sex:
No sex scenes or sexual immorality, but some kissing
Nudity:
Upper male nudity
Alcohol Use:
Drinking and implied drunkenness
Smoking and/or Drug Use and Abuse:
No smoking or drugs; and,
Miscellaneous Immorality:
Deceit but rebuked.

FINDING YOU is a romantic drama about a young woman who doesn’t do well in a violin audition, so she decides to follow the follow the footsteps of her brother to a semester abroad in Ireland, where she meets a young movie star shooting a movie. FINDING YOU is a fun, wholesome movie with a strong Christian worldview about finding love, looking for peace in the Cross of Christ, and finding purpose and meaning in life beyond fame and fortune, but there is light, brief foul language and implied drunkenness.

Finley isn’t able to pass an audition even though she has worked day and night practicing the violin. She decides that maybe she could use a little inspiration and follow the footsteps of her brother to a semester abroad in Ireland.

When Finley gets on the plane, she sits next to Beckett, a Hollywood heartthrob who is shooting a movie in Ireland. Beckett seems conceited and egotistical, so Finley doesn’t give into his charm. Seeing as the two are in a small town, they soon run into each other. Finley’s host family owns a Bed and Breakfast. It so happens that Beckett also likes to stay in this quaint, under the radar B&B.

One day, Finley is asked to take out breakfast to a guest, and she walks out and realizes the guest is Beckett. It’s clear now that Beckett and Finley will be spending a lot of time together, out of proximity. Beckett also realizes he could use Finley to help him run his lines. In exchange, he agrees to take Finley around the countryside in his car. Reluctantly, Finley agrees, since she would rather focus on her studies and violin, but she does want to spend time seeing the countryside.

While Finley practices her violin, she finds a sketchbook from her late brother. One drawing has Finley’s name written by a cross. Finley longs to find the meaning of this cross and searches for the peace her brother had during the final days of his life.

FINDING YOU is a fun, wholesome movie about finding love. The movie is entertaining throughout and will make audiences want to go to Ireland. The storyline itself is a typical romance and the acting isn’t award winning, but FINDING YOU is enjoyable overall. MOVIEGUIDE® advises caution for younger children because of brief light foul language and implied drunkenness.