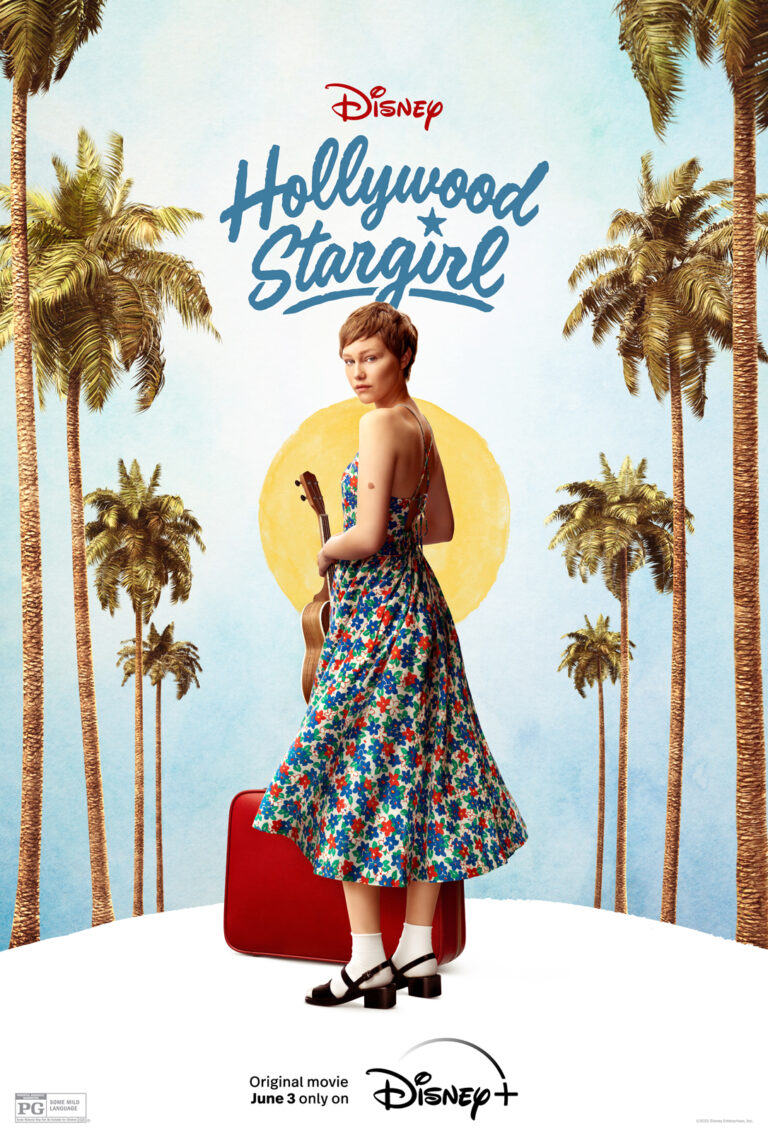 HOLLYWOOD STARGIRL is a follow-up to the movie STARGIRL on Disney Plus. It follows Stargirl and her mother, who move to Los Angeles for the mother’s new job as a costume designer for a new movie. Stargirl is a singer whose new neighbors are a pair of brothers trying to make a sizzle reel for a movie they want to make. She joins them, using her singing talents to help. In the process of helping them, Stargirl finds love and a home in Los Angeles. However, her life hits a snag when her mom’s movie unexpectedly shuts down production.

HOLLYWOOD STARGIRL is a sweet, feel-good movie with some nice musical numbers, bright visuals and beautiful settings. The story moves at a moderate pace. The movie has a moral worldview. It stresses showing kindness, mercy and love regardless of what you get back. It also encourages young viewers to respect and gain wisdom from their elders. However, HOLLYWOOD STARGIRL has some light, brief foul language and Romantic themes about chasing your dreams and following your own path. So, MOVIEGUIDE® advises caution for younger children.

(BB, Ro, L, A, M):
Dominant Worldview and Other Worldview Content/Elements:
Strong moral, pro-family worldview promotes kindness, mercy and love regardless of what you get back, plus Thank God is said three times and movie encourages young viewers to respect and gain wisdom from their elders, mixed with some Romantic themes about following your dreams and following your own path
Foul Language:
On “d” obscenity and four light profanities
Violence:
No violence
Sex:
No sexual content.
Nudity:
No nudity, but one somewhat low-cut dress with no cleavage
Alcohol Use:
Two key scenes in an open bar, background drinking, underage teens coming for open mic but get kicked out
Smoking and/or Drug Use and Abuse:
No smoking or drugs; and,
Miscellaneous Immorality:
Three kisses, two of them prolonged, and mother and daughter have an argument but their differences are resolved.

In HOLLYWOOD STARGIRL, a follow-up to the movie STARGIRL on Disney Plus, a young female singer moves to Hollywood for her mother’s dream job as a costume designer and finds a home while fulfilling her own dreams. HOLLYWOOD STARGIRL tells a sweet, feel-good story with some nice musical numbers, bright visuals, beautiful settings, and positive moral elements stressing kindness, mercy, love, and respecting your elders, but caution is advised for younger children because of brief, but light foul language and some Romantic themes.

The movie begins with Stargirl’s move to Los Angeles in the summer for her mother’s big break as a costume designer for a movie. Stargirl expresses disappointment for their frequency of moving, but her mother promises her she’ll be able to finish her senior year in Los Angeles.

With her mother frequently on the movie set, Stargirl spends much of her time alone and sings to herself. Her neighbor and landlord’s son, Evan, hears her singing and gets her attention by throwing pebbles at her window. The exchange draws out her grouchy downstairs neighbor, Mr. Mitchell, who snaps at them about the noise. However, the encounter gives Stargirl and Evan a sense of camaraderie, and she comes down to talk. She learns that Evan and his older brother, Terrell, want to make a sizzle reel for a movie they hope to make. Evan thinks Stargirl’s singing would be perfect for it. Stargirl protests she isn’t an actor, but she agrees.

Later in the week, Evan comes to take her to the bar his brother works at to meet him and sing. She gets up to sing and wows the crowd, including a favorite singer of hers, Roxanne Martel, whom she recognizes. However, Stargirl’s presence as a minor in a bar gets her and Evan kicked out by the owner.

Stargirl returns to the bar during off hours to ask Roxanne if they can use one of her songs in their sizzle reel. Roxanne tells her no, adding she must follow her own path. Stargirl goes away disappointed.

Stargirl, Evan and Terrell work on their own song using the bar’s piano during off hours. Roxanne is there. After hearing their work, she decides to help them record. The grumpy neighbor, Mr. Mitchell, has also been appeased by Stargirl’s kindness, and he helps them get obtain the equipment they need for shooting the sizzle reel. They send the reel off successfully, and Stargirl and Evan discuss getting into a relationship.

Stargirl and the two brothers get the news that a female producer liked their sizzle reel and wants to meet them. They meet the producer, and she agrees to finance their movie. However, Stargirl comes home to find her mom crying. Her mother tells her that her movie’s production has been shut down and that they will have to move, despite her promise not to move from Los Angeles. A brief argument ensues where Stargirl tells her mother that she’s finally happy and doesn’t want to move.

Reluctantly, Stargirl prepares to leave town. She meets with the new friends she’s made and asks them for advice to take with her. As Stargirl is packing up the house, she and her mother sit down and have a heart-to-heart talk about life, regrets and staying together no matter what. Then, Stargirl asks her mother, “What if we stayed?”

HOLLYWOOD STARGIRL tells a sweet, feel-good story with some nice musical numbers, bright visuals and beautiful settings. The movie moves at a moderate pace, creating a heartfelt story about family and finding home. There’s some slightly stilted dialogue and acting in places, but nothing too distracting.

HOLLYWOOD STARGIRL has a strong moral worldview stressing kindness and love regardless of what you get back. It also stresses respecting and gaining wisdom from your elders. That said, HOLLYWOOD STARGIRL has some Romantic elements about chasing your dreams and following your own path, plus some light foul language. So, MOVIEGUIDE advises caution for younger children.