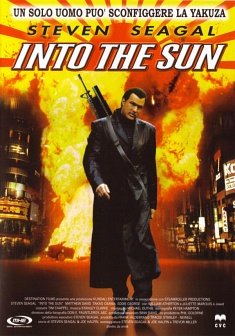 An obnoxious movie star and serious-minded fighter pilot are stuck together behind enemy lines in this action comedy which tries to ride the crest of Desert Storm fever, which, unfortunately, broke a long time before this movie was released. Foul language and fouler production values make this one a definite "scud."

INTO THE SUN is a feeble action comedy about American fighter jocks stationed in the Middle East. Duty-minded fighter pilot “Shotgun” Watkins finds himself partnered with Tom Slade, an obnoxious movie star sent to research his part as a pilot in an upcoming movie. Their personalities clash from day one. When, however, the two are shot down and captured by hostile forces of a third-world nation resembling Iraq, they must learn to cooperate. Slade manages to escape and uses his movie star clout with the local Bedouins to rescue Watkins. Together, they steal a plane and head for home. The final dogfight with an American mercenary pilot flying for the enemy ends with our heroes…well, you know the rest.

For the tardiness of the subject matter and the silliness of both screen play and performances, INTO THE SUN is proving to be one of 1992s most talked about movies, though certainly one of the least seen. Even the aerial cinematography, which might have been the salvation of this movie, fails to hold attention for long. Furthermore, thanks to a few dozen instances of obscenity, not even the kiddies (who may be the only audience for this film) should be exposed to it.