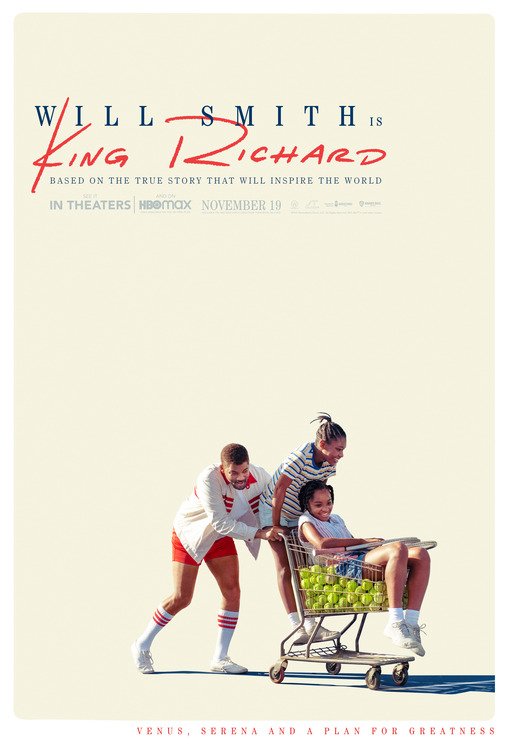 KING RICHARD tells the story of a caring father who supports his daughters, Venus and Serena, in becoming the greatest tennis players. Richard has five girls, two of which, Venus and Serena, are fabulous tennis players. During the day, Richard goes to the best tennis clubs and tries to get the girls a coach who’ll train them for free. During the afternoon, he trains the girls, and they practice on the public tennis courts in Compton, where they live. Richard convinces a famous coach to train Venus. When Venus starts winning every tennis competition she enters, Richard fears she’ll become burned out and vain.

KING RICHARD is beautiful, heartfelt and inspiring. It has a strong Christian, moral, pro-family worldview with positive messages of Christian faith, virtue and character. Viewers will become totally immersed in the story and find the characters appealing. The movie does have some hard scenes related to gang violence and foul language. Overall, though, KING RICHARD stresses the importance of Christ-like character, the love of a family, and following one’s natural God-given talents. MOVIEGUIDE® advises caution for older children.

(CCC, BB, LL, VV, M):
Dominant Worldview and Other Worldview Content/Elements:
Very strong Christian worldview includes prayer in Jesus’ name, mother says she’s committed to a relationship because she follows God, and mother who talks about her faith, plus strong moral elements stress the love of a family, parental guidance, strong father protects his daughters, and following one’s natural, God-given talents
Foul Language:
20 obscenities (including one “f” word) and one strong profanity
Violence:
Man beaten by gang, gang member shot and killed, police beat a man, man is tempted to shoot someone but doesn’t
Sex:
No sex
Nudity:
No nudity
Alcohol Use:
No alcohol use
Smoking and/or Drug Use and Abuse:
No smoking or drugs;
Miscellaneous Immorality:
Some hard scenes related to gangs.

KING RICHARD tells the story of a father who supports his daughters, Venus and Serena, in becoming the greatest tennis players of all time. KING RICHARD is a beautiful, heartfelt, gripping movie and has a strong Christian worldview with a wonderful example of godly parenting, as well as positive messages of Christian faith, virtue and character.

Richard has five girls, two of which, Venus and Serena, are fabulous tennis players. During the day, Richard goes to the best tennis clubs and tries to get the girls a coach who will train them for free. During the afternoon, he trains the girls, and they practice on the public tennis courts in Compton, where they live. At night, Richard goes to work as a security guard in a market.

Day after day, the family does the same routine of practicing tennis, working hard and encouraging each other to become the best they can be. One day, Richard takes Venus and Serena to meet a well-known coach, Coach Paul. Richard convinces Coach Paul to watch Venus and Serena. After watching them, Coach Paul agrees to take on Venus without charge, because he believes she has a bright future in tennis.

Venus starts to compete and win all the games she plays. When her sisters tease the other girl Venus plays, Richard stops them right there and explains that they won’t continue playing tennis if they don’t have humble hearts doing it, even after they win.

When an agent comes to Richard and tries to take on Venus, Richard is protective and doesn’t want Venus competing at such high levels at such a young age. Richard and Brandi, Venus’ mom, want Venus and the other girls to grow up with faith, virtue, Christ like character, and not be burned out at a young age.

Will Venus succeed even with her father not allowing her to compete or get an agent?

KING RICHARD is a beautiful movie. The movie has heartfelt moments that will make audiences cry, and a moment later, the audience will laugh. The movie shows parents who care for their children, instilling God’s purpose in their lives and giving them confidence in their talents. Will Smith does a great job as Richard. He’s a loving father who prays in Jesus’ name, who protects his daughters from men who are trying to tempt them, and who constantly sacrifices for them and his family. Actress Aunjanue Ellis does an incredible job depicting the mother to Venus and Serena, She fights for her daughters every day and openly talks about serving God. Overall, this movie shows what it means to be a great parent and a great person of faith.

KING RICHARD is extremely well made and has a strong Christian, moral, pro-family worldview with positive messages of Christian faith, virtue and character. Viewers will become totally immersed in the story and will find the characters really appealing. However, the movie does have some hard scenes related to gang violence, including a father being beaten for protecting his daughter, and some foul language. MOVIEGUIDE® advises caution for younger viewers but encourages older audiences to see KING RICHARD.