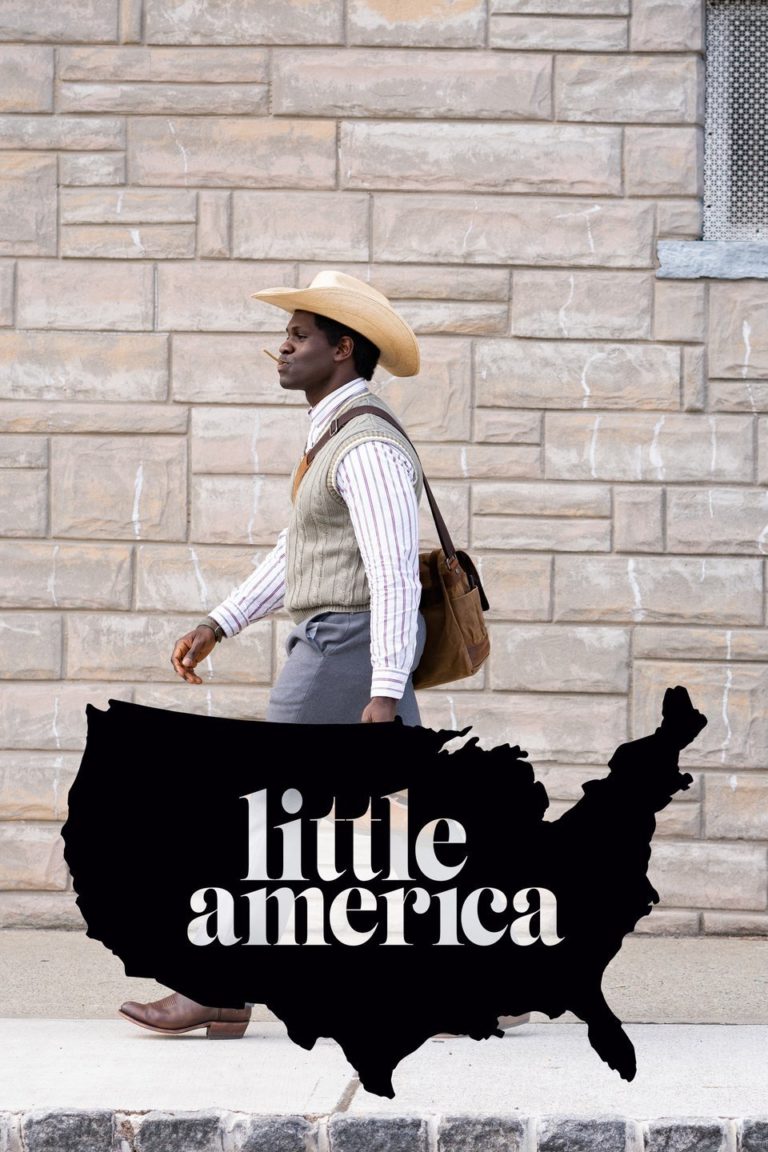 LITTLE AMERICA is an eight-episode, comedy-drama series on Apple+ depicting the stories of immigrants in America. MOVIEGUIDE® screened four episodes. The program’s first episode, “The Manager,” follows the 12-year-old son of Hindu parents from India, who joins the National Spelling Bee and gets help bringing his deported parents to America. “The Jaguar” follows a sullen teenage Latin American immigrant, who finds purpose interacting with a coach at her high school. In “The Cowboy,” a Nigerian college student finds acceptance in Oklahoma when he adopts an urban cowboy lifestyle. “The Son” is about a homosexual man fleeing Muslim violence against homosexuals in Syria.

LITTLE AMERICA is a refreshingly apolitical and surprisingly patriotic look at the contentious issue of immigration. Two of the episodes have positive Christian content. However, two other episodes have some foul language, “The Manager” shows a family worshipping Hindu gods, and “The Son” contains a politically correct view about explicit homosexual sin. “The Cowboy” is the cleanest and MOVIEGUIDE®’s favorite episode of LITTLE AMERICA. Christianity plays a huge part in the life of the Nigerian immigrant.

(PaPa, BB, PP, Cap, CC, FRFR, HoHo, L, V, SS, N, A, M):
Dominant Worldview and Other Worldview Content/Elements:
Strong mixed pagan worldview with some strong moral elements, a stirring and patriotic look at the American Dream from the viewpoints of disparate immigrants in search of a better life in the US, some strong Christian elements in a couple episodes, but undercut by positive portrayals of false religions like Hinduism, and a politically correct episode featuring homosexual kissing and shirtless man that cuts away, implying sexual encounters ensue
Foul Language:
“The Manager” episode features one “s” word and two “a” words, “The Jaguar” features two “s” words, and “The Cowboy” and “The Son” have no foul language
Violence:
References to a young homosexual man’s father burning his son’s arm after he sees the son kissing another man
Sex:
“The Son” episode features two scenes of two men kissing occur, one features the men removing their shirts and lowering to an unseen bed before cutting away, one man tells another, “It’s OK for this to feel good,” man reveals his father burned his arm after he caught him kissing a man and says that in Islam, it’s believed that homosexuals go to Hell, and their mothers go with them, and a scene in a homosexual bar features quick shots of several shirtless men dancing by themselves suggestively, two men kissing lustfully, and drag queens performing on a stage
Nudity:
Two men are seen removing their shirts before having homosexual sex offscreen, and men are briefly seen shirtless in a homosexual bar
Alcohol Use:
Visit to a bar in “The Son” episode
Smoking and/or Drug Use and Abuse:
No smoking or drugs; and,
Miscellaneous Immorality:
In “The Jaguar,” the lead teenage girl is rebellious and disrespectful at school and at times toward her coach, though she learns self-discipline by the end.

At a time when so much stress and strain is happening in America amid the Coronavirus pandemic, it’s refreshing to find a reminder of our shared humanity and the things that make America so amazing. The new series LITTLE AMERICA, streaming on the new Apple+ service, offers eight episodes of stirring, hugely affecting drama, based on true-life tales of immigrants who devote everything to pursuing the American Dream in various ways.

MOVIEGUIDE® screened the first three episodes and the final one of LITTLE AMERICA. The four episodes present a representative sample of what the series is trying to do. LITTLE AMERICA is executive produced by the husband-wife team of comedian/writer/actor Kumail Nanjiani and Emily V. Gordon, who scored an Oscar nomination for their screenplay of the 2018 hit “The Big Sick.” The series is a highly patriotic tribute to the nation that Nanjiani’s family fled to while escaping hardline Islamist persecution in Pakistan when he was a child.

Each of the episodes stars unknown actors who appear to be of the actual ethnicities they portray, creating a sense of realism that couldn’t be matched watching known actors with pre-conceived personality types. Except for several obscenities, the first three episodes are rather free of explicit or graphic violence, sex or nudity. However, Episode 8 is about a Syrian man who seeks asylum in the United States his life is endangered in his Muslim country for being a homosexual and features some homosexual kissing and implied sex along with a scene in a homosexual bar, but otherwise isn’t explicit or graphic.

The first episode, “The Manager,” follows the story of a 12-year-old boy named Kabir, who’s the happy son of Indian parents who own a mid-level hotel in small-town Utah. His father ingrains in him a passion for learning vocabulary by telling him, if he learns every word in the dictionary, he’ll buy him a Trans-Am sports car.

However, tragedy strikes when the parents are deported, leaving Kabir to manage the motel himself under the extremely slack guidance of a family friend. A helpful teacher urges Kabir to enter the National Spelling Bee because of his word mastery. This gives him a direct chance to appeal for his parents to then-First Lady Laura Bush at a meet and greet for the national-level spellers, with unexpected results.

The second episode, “The Jaguar,” follows a teenage girl named Marisol, whose Latin American mother and brother are housecleaners for wealthy people while she’s a trouble-maker at school. Marisol believes there’s no point to trying hard or behaving well because her illegal status will prevent her from receiving scholarships. However, she decides to try out for the school’s squash team when she sees a flyer saying that players will receive free new pairs of shoes.

At first, she’s in it just for the footwear, but the coach sees “the heart of a jaguar” in her feisty on-court abandon. And thus begins a rousing, Mr. Miyagi-Daniel style relationship akin to the classic “THE KARATE KID.” This story also leads to unexpected twists on the way to an extremely satisfying conclusion.

The third episode, “The Cowboy,” is both the cleanest and our favorite of the four episodes we screened. It follows a Nigerian named Iwegbuna, starting when he’s a young boy watching an American cowboy movie with his father and brother. Years later, he gets the chance to study at college in Oklahoma, which is real-life cowboy country and thus total heaven to him.

Since he’s from a much more uptight culture, Iwegbuna has a hard time fitting in among his students with his extremely formal dress and overly eager demeanor. However, when his English-language teacher and an economics professor encourage him to fit in more with his new surroundings, he enters a Western-wear store and begins a deep dive into living the cowboy culture he loved as a boy. This leads to many amusing and amazing parallels between the cowboy spirit and the Nigerian way of life.

Finally, “The Son” closes out the initial collection of episodes by following Fariq, the aforementioned homosexual man from Syria who’s desperate to find survival and happiness in the U.S. Because homosexuality is illegal in Syria, and homosexuals face brutal persecution and even death if caught, Fariq flees from his small town to the capital city of Damascus in order to hide from his family after his father burns his arm upon seeing him kiss a man.

In Damascus, Fariq finds work in a restaurant with Zain, a much more assured homosexual who’s obsessed with American singer Kelly Clarkson. When their restaurant is trashed by Fariq’s brother while he’s away, Fariq has to flee to Jordan for his safety. He begins an arduous wait for asylum while Zain makes it to the U.S. first and sends him postcards about the free life he’s found there.

Only this final episode out of the four has any strong objectionable content, as Fariq is seen having secret rendezvous with two different men. Both encounters involve just kissing on-screen, but in the second one the men each remove their shirts before the camera cuts away as they lower to a bed.

If you’re wanting to avoid anything to do with that topic, the other seven episodes are more friendly to media-wise viewers. They’re all expertly shot, filled with great performances by fresh actors making the most of rare opportunity, and each also features a fun musical score reflecting the background of each ethnic culture depicted.

One other thing that’s remarkable about “Little America” (so named as a twist on the “Little Italy,” “Little Vientam” or “Little Bangladesh” neighborhoods in major cities) is its positive portrayals of faith. Two episodes include strong Christian references, but one of the four episodes screened contains false religion. For example, in “The Manager,” Kabir’s family prays to their Hindu gods, while Marisol and family are matter-of-factly shown praying before a meal in “The Jaguar.” Also, Christianity plays a huge part in the life of Iwegbuna in “The Cowboy.” The portrayal of Islam in “The Son” makes no bones, however, about showing the harsh physical reprisals given for homosexual behavior, including Fariq’s arm being burned repeatedly by his own father offscreen.

Overall, LITTLE AMERICA steers clear of politicizing the often contentious issue of immigration, but some people on opposing sides of the issue may find something in them to attack or defend if they’re looking for such things. Despite the issues mentioned above, the series is surprisingly stirring, patriotic program about pursuing the American Dream.