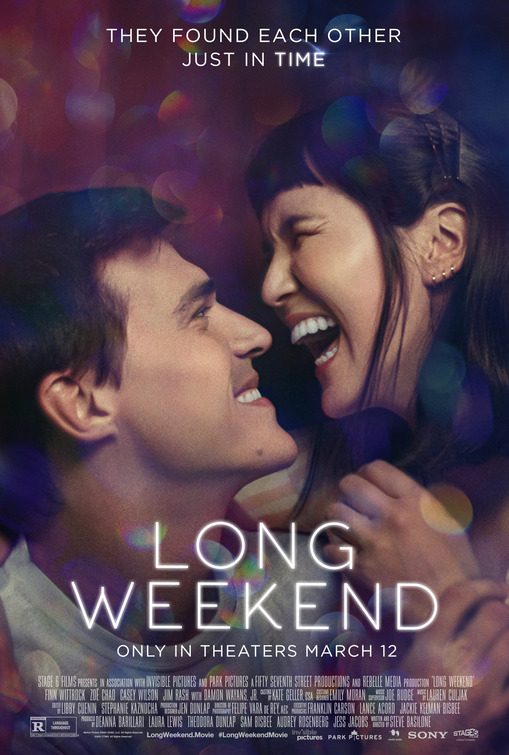 LONG WEEKEND is the droll story of a whirlwind affair between a troubled writer recovering from near-suicidal depression and a mysterious woman who claims she’s a time traveler from the future. Bart tells his highly skeptical friend, Doug, about Vienna and her incredible claim. Doug warns Bart that Vienna sounds insane and being involved with her could risk Bart’s own tenuous sanity. Will Bart stick with Vienna? Is she crazy? Or, is she telling the truth?

LONG WEEKEND consists almost entirely of endless talking between implied sexual romps. Also, the threadbare plot by writer-director Steve Basilone often has laughable, eye-rolling logic. The movie stars Finn Wittrock as Bart and Zoe Chao as Vienna. They both offer engaging performances, but the rest of the movie is so poorly plotted that only two other supporting characters are noticeable at all. The sex in LONG WEEKEND is implied rather than shown, but it features plenty of strong foul language. LONG WEEKEND is a cheap, talky boring slog to watch that will make adult viewers feel like they’ve lost a whole weekend despite the short running time.

(RoRo, LLL, S, N, A)
Dominant Worldview and Other Worldview Content/Elements:
Highly Romantic worldview as story centers around a couple who have a love affair involving premarital sex without consequences
Foul Language:
At least 31 obscenities (about 19 are “f” words) and five strong Jesus profanities, plus two parents jokingly chant that a friend “got laid” and lead their young boy in saying the chant
Violence:
No violence
Sex:
No graphic sex, but several scenes occur where the lead couple starts kissing passionately and then are seen lying in bed after implied sex
Nudity:
A man is seen several times in bed, shirtless after implied sex. A woman’s bare shoulders are seen under the sheets, implying she’s naked. A young boy is comically portrayed jumping up and down while wearing only underpants, saying he’s “naked guy”
Alcohol Use:
A couple is seen drinking alcohol socially at several points in the movie
Smoking and/or Drug Use and Abuse:
No smoking or drugs; and,
Miscellaneous Immorality:
So little happens in this threadbare-plotted movie that there’s no noticeable miscellaneous content.

LONG WEEKEND is the droll story of a whirlwind romance between a troubled man recovering from near-suicidal depression and a mysterious woman who claims she’s a time traveler from the future. Containing plenty of strong foul language and illicit behavior, LONG WEEKEND is a cheap, talky, boring slog to watch that will make viewers feel like they lost a whole weekend despite its short 91-minute running time.

The movie stars Finn Wittrock as Bart, a struggling writer who fell into near-suicidal depression due to a romantic breakup and money troubles. The movie opens with multiple messages on his voicemail from concerned doctors and friends, before showing him attending a screening of the classic comedy BEING THERE at a revival movie theater.

He falls asleep during the screening and is awakened by a female fellow patron named Vienna (Zoe Chao), who follows him out of the theatre and invites him for drinks at a nearby bar. The drinks turn into a lengthy night walking the streets of Los Angeles, and, by the end of their evening, they’ve jumped into bed together.

As their fling continues and deepens over the next few days, Bart notices that Vienna keeps her job and background mysteriously vague, while sporting huge wads of cash. Demanding an explanation, Vienna claims that she’s actually from 30 years in the future and has come back in time to buy stocks that will become valuable, in order to have the money needed to pay for her mother’s expensive cancer treatments.

Bart tells his highly skeptical friend, Doug (Damon Wayans, Jr.), about Vienna and her incredible claim. Doug warns him that she sounds insane and being involved with her could risk Bart’s own tenuous sanity.

Will Bart stick with Vienna? Is she crazy? Or, is she telling the truth?

This may sound like an interesting plot, but Writer-Director Steve Basilone blows it by making a movie that feels talky and cheap. The viewers aren’t shown any real evidence of Vienna’s claims, nor any special effects involving time travel, but instead are left to slog through endless talking and laughable logic.

With only Doug and Bart’s landlord (Wendy McLendon-Covey) as noticeable supporting characters, the movie feels like its limited budget could only afford four actors and just a handful of bit players and extras. This movie might have been more entertaining with a decent budget, but it’s sadly a case of having too little to offer.

LONG WEEKEND has foul language throughout and implies several sexual encounters through scenes of the couple kissing passionately before sex and then cutting to them lying in bed afterwards. The lead male is seen shirtless in bed several times after sex, while the lead female’s bare shoulders are seen under the covers, implying nudity.

One other brief moral side note involves Doug’s toddler son, who’s seen wearing only underpants yelling that he’s “Naked guy! Naked guy!” repeatedly in one scene. More troubling, he’s led to chant “Bart got laid!” several times by his parents. Both scenes are intended to be comical but are squirm-inducing considering the child actor’s age.

LONG WEEKEND may have a short running time, but its threadbare plotting and stagnant pacing will make viewers feel like they lost a long weekend watching it. Only adults with time to burn should consider watching this excessive movie.