"Watch Out for Some Weeds Among the Blossoms" 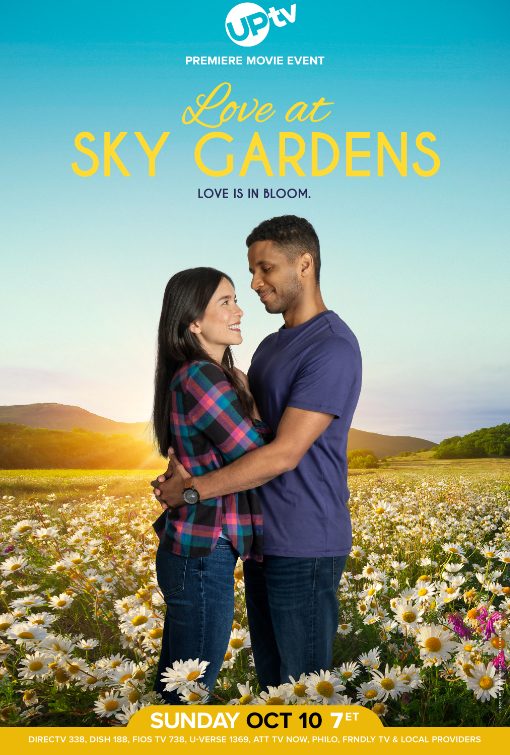 LOVE AT SKY GARDENS is a light romantic comedy streaming on the UP Faith & Family app. Deirdre and Marcus are dissatisfied with their current jobs and look to expand their careers by doing what they want – designing rooftop gardens and party planning. After the two don’t land new jobs, Marcus pitches the idea of creating a rooftop garden for a high-profile wedding, but he’ll need Deirdre’s help. Can they pull off the wedding and make their six-week deadline?

LOVE AT SKY GARDENS is funny and well-acted, with beautiful sets and lots of style. The movie has Romantic, Rousseau-type characters chasing their professional dreams and stressing their feelings. However, the movie contains some moral elements promoting friendship, teamwork, marriage and running a business serving the customer. Also, a man apologizes for poor behavior. Sadly, though, LOVE AT SKY GARDENS has some miscellaneous objectionable content, such as an engaged couple living together, a few New Age references made by two side characters, and a man saying he’d ask out another man. The objectionable content in LOVE AT SKY GARDENS warrants caution for older children.

(RoRo, B, CapCap, FR, E, Ho, V, S, N, A, MM):
Dominant Worldview and Other Worldview Content/Elements:
Strong Romantic worldview in the philosophical sense overall where lead characters chase their professional dreams, characters stress how a garden is love, and the story stresses people’s feelings, with some moral elements such as man apologizes for poor behavior and movie promotes marriage, friendship and teamwork, with strong capitalist content about two businesses joining together and includes a comment about a woman who’s grown her coffee shop by investing in her customers, an engaged couple is depicted as very “spiritual” as they talk about aura, energy, etc., and there’s a scene using yoga for stress relief, some light environmentalist sentiments as characters stress the beauty of nature, and a man says he’d ask out another man
Foul Language:
No foul language
Violence:
Woman accidentally spills a latte on a customer, and a mention of someone who set a condo on fire
Sex:
No depicted or implied sex scenes but an engaged couple lives together, and the would-be groom falls for the woman he's working with on a special business project, plus a man says he would ask out another man
Nudity:
Upper male nudity when a man steps out of the shower
Alcohol Use:
Social drinking
Smoking and/or Drug Use and Abuse:
No smoking or drugs; and,
Miscellaneous Immorality:
Strong miscellaneous immorality such as daughter makes a comment about her parents’ passive aggressive comments, engaged man talks to others about his disgruntlement with his fiancée instead of going to her first, an engaged woman wants to go to her friend’s wedding event to sell the bride a house, and some lying about characters’ motivations but ultimately characters admit their wrongdoings.

LOVE AT SKY GARDENS is a light romantic comedy streaming on the UP Faith & Family app.

It begins with Deirdre Chan, a barista with aspirations to take her career to the next level and become a landscaping designer. Deirdre’s roommate’s parents land her an interview at Rooftop Dreams and she’s ready to make the best impression. Meanwhile, Marcus Turner works as an assistant to an executive at Sky Gardens, an event planning company. However, he’s looking to interview for the open Manager of Events position.

Marcus is a regular at Deidre’s coffee shop, and Deirdre has a bit of a crush on him. However, Marcus is engaged to another woman, and they live together. He only goes into the shop to grab coffee for his boss.

When Deirdre’s interview doesn’t land her the new job, she’s back at the coffee shop when Marcus comes in the day of his interview. In her haste to make a latte for Marcus, she spills the latte for his boss on him, which puts a wrench into Marcus’ own interview plans.

Wendy, Marcus’ success-driven realtor fiancée, is disappointed he didn’t get the job. On the other hand, Deirdre and her roommate make a plan to give Marcus a new coffee since she’s seen his name on his credit card. Deirdre shows up outside Marcus’s place of work with a coffee, but he’s still frustrated by the spill. Deirdre holds her own and explains why design and outdoor architecture matter and that she’s not just a barista. She leaves and makes up her mind to not think about Marcus anymore.

Later, Marcus and his boss, Valencia, host a wealthy wedding client. The couple is unimpressed with most of their ideas, until Marcus recalls Deirdre and her rooftop gardens. He promises he can deliver that location for the couple, so the pressure is on for him to deliver.

Marcus meets up with Deirdre and says he got her a job. However, he didn’t realize she’s only completed one rooftop garden before this one.

Can they pull off the wedding and make their six-week deadline? Complications ensue when Marcus falls for Deirdre.

LOVE AT SKY GARDENS is a standard but fun TV movie romance that makes good use of montage and comic timing. The cast does a fine job, the camera quality is great, and some scene transitions are pleasantly stylistic. Also, the sets are beautiful, since the plot focuses on beautiful design and architecture.

LOVE AT SKY GARDENS has a strong Romantic worldview, because the lead characters are chasing their professional dreams. Also, the movie stresses that a garden is love and stresses people’s feelings rather than doing the right thing.

That said, LOVE AT SKY GARDENS contains some moral, pro-capitalist elements. For example, there is a reverence for marriage, a man apologizes for poor behavior, and the movie promotes friendship, teamwork. An engaged couple is depicted as very “spiritual” as they talk about aura, energy etc. There are also light environmentalist sentiments as characters stress the beauty of nature and one comment man says he’d ask out another man and another pro-Capitalist comment. MOVIEGUIDE® recommends caution for some worldview elements and miscellaneous immorality.