"A Matter of Conscience" 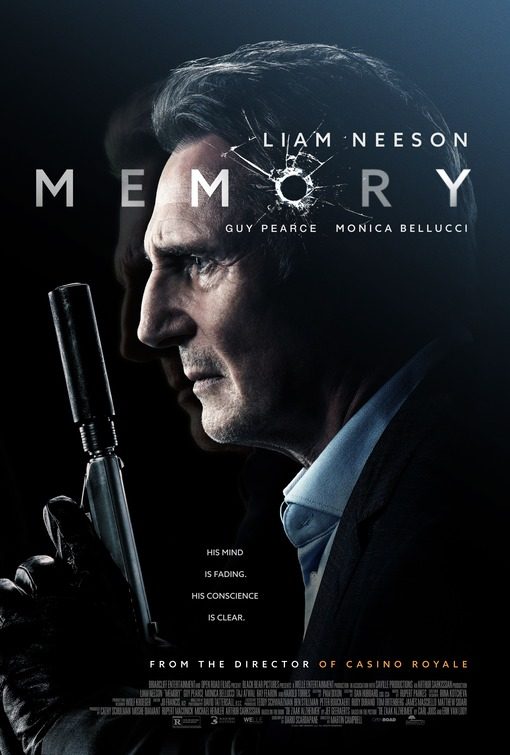 MEMORY stars Liam Neeson as Alex, a hitman suffering from an onset of Alzheimer’s disease who’s ordered to kill a young teenager girl rescued from a sex trafficking ring by an FBI agent named Vincent. Alex can not go through with the murder of the girl, but his business partner in Mexico City carries it out and tries to kill Alex. Alex turns the tables on his business partner. He then goes on a rampage against the human traffickers behind the girl’s murder. Meanwhile, the FBI agent and his team try to follow Alex’s trail of destruction and get to the culprits before Alex does.

MEMORY is a riveting, well-directed thriller. It’s one of Liam Neeson’s better movies as a lone wolf action star. Also, Guy Pearce does an excellent job as the compassionate, heroic FBI agent. He’s the movie’s moral center. That said, MEMORY has lots of strong foul language and violence, including some extremely bloody gun violence. Finally, there’s some moral relativism at the end of MEMORY involving vigilante justice by a police officer. So, MOVIEGUIDE® advises extreme caution.

(BB, PP, C, Ab, LLL, VVV, S, A, MM):
Dominant Worldview and Other Worldview Content/Elements:
Strong moral, biblical worldview with a positive view of police officers trying to bring evil criminals to justice, with some light brief Christian references, marred by some vigilante justice by one police officer
Foul Language:
62 obscenities (about 40 or so “f” words), six Jesus profanities, one OMG profanities
Violence:
Lots of gun violence, including some extreme and bloody gun violence, such as hitman kills sex traffickers involved in murder of young teenage girl who’s a possible witness, hitman tied to steering wheel of car as another hitman detonates the bomb that the first hitman had placed under the car to kill the second hitman, FBI tackles sex trafficker and they fly through a window and land on a car below (sex trafficker is killed), several gun battles, man patches up bullet wound in stomach, killer cuts character’s throat with a garrot, body of young teenage girl found with gunshot wound in forehead, innocent bystander killed in one gun battle
Sex:
Sexual content includes implied fornication, FBI agent poses as a client in a sex trafficking sting by the FBI, video shows older man entering room of teenage sex slave, and there’s brief talk later of the man being guilty of raping multiple such girls, man traffics his young teenage daughter
Nudity:
Upper and rear male nudity in two scenes
Alcohol Use:
Some alcohol use
Smoking and/or Drug Use and Abuse:
No smoking or drugs; and,
Miscellaneous Immorality:
Human trafficking but rebuked, two bad parental figures, corruption.

MEMORY stars Liam Neeson as a hitman who goes on a rampage after a human trafficking ring kills a young teenage girl from Mexico that he and an FBI agent tried to protect after the FBI killed the girl’s abusive father. MEMORY is a riveting thriller, but there’s lots of strong foul language, some extreme gun violence and some moral relativism when one of the cops working with the FBI engages in an act of vigilante justice at the end.

The movie begins with Liam Neeson’s hitman character, Alex Lewis, finishes a job in San Diego. Using a code, he texts his partner, a hitman who lives in Mexico City, that the job is done. What he doesn’t tell anyone, however, is that he’s suffering from Alzheimer’s and had to write down the hotel and room number where the victim was staying on his arm.

Cut to FBI Agent Vincent Serra engaged in a sting operation with a Mexican detective, Hugo Martinez, to bring down a human trafficker who’s trafficking his own daughter, a young teenage girl named Beatriz. The father gets wise, learns that Vincent is wearing a wire, grabs Beatriz, and threatens to kill her. Vincent distracts the father and makes a flying tackle. However, the two men plunge through a window, and the father fatally cushions Vincent’s fall by hitting a car below first.

Vincent’s boss and the Mexican cop are upset that they can’t interrogate the father to lead them to the trafficking ring’s leaders. The boss decides to stop working with the Mexican officials, but Hugo decides to stick around for a few days. Meanwhile, Vincent visits Beatriz at the immigration detention facility and manages to get her placed in a group home run by the FBI witness protection program.

However, in Mexico City, Alex’s hitman partner, Mauricio, gives Alex the assignment to kill Beatriz, but Alex refuses to kill a child and tells Mauricio he has to retire. Mauricio refuses to let Alex out of the assignment, but when Alex manages to infiltrate the house where Beatriz is sleeping, he can’t do it.

Alex returns to his hotel where he hooks up with a woman in the hotel bar. While they’re sleeping in his room, he has a nightmare about Beatriz being killed and calls the local FBI to warn them about Beatriz. However, Vincent and his FBI partner are too late to save Beatriz, and Alex appears at the group home to see paramedics place Beatriz’s body in the Coroner’s van.

Alex returns to his hotel room to tell the lady there to leave and never come back to that hotel. Out in the parking garage, however, Alex notices that someone has placed a bomb under the car. His friend Mauricio suddenly appears and starts shooting at him. A gunfight breaks out when the woman from the hotel room suddenly appears telling Alex he forgot his pills. Alex tries to save the woman, but she gets shot dead in the crossfire. Alex manages to sneak up on Mauricio and knock him out. Cut to Alex putting the woman’s body in the trunk of his rental car with Mauricio tied to the steering wheel. He says goodbye to Mauricio, then hits the detonator, causing the car to explode.

Alex starts a rampage to kill the people behind the trafficking ring who had Beatriz murdered. Meanwhile, Vincent and the FBI, and the Mexican cop, try to follow Alex’s trail of destruction and get to the culprits before Alex does.

MEMORY is a riveting, well-directed thriller. It’s one of Liam Neeson’s better movies as an action star. Also, Guy Pearce does an excellent job as the compassionate, heroic FBI agent. He’s the movie’s moral center.

That said, MEMORY has lots of strong foul language, including excessive “f” words and some strong profanities. The movie also has lots of strong violence, including some extremely bloody gun violence. In one scene, Neeson has to take care of a bullet wound in his stomach. Finally, there’s some moral relativism at the end of MEMORY involving vigilante justice by a police officer. So, MOVIEGUIDE® advises extreme caution.