A WALK IN THE WOODS

"An Episodic Take on Living Life to the Fullest" 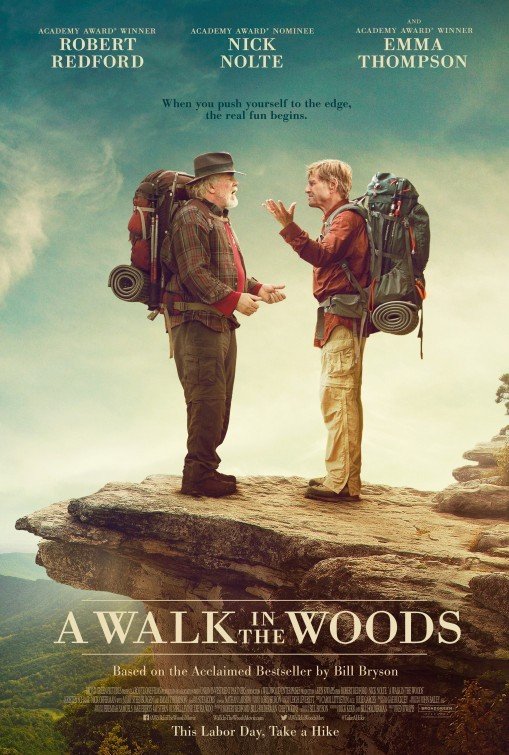 A WALK IN THE WOODS stars Robert Redford as real-life travel writer Bill Bryson, who’s facing old age. After a friend’s funeral, Bill decides to hike the 2,100 mile Appalachian Trail from Georgia to Maine. However, his wife insists he take along a friend. All his friends turn him down, but Bill gets a call from an old friend named Stephen, played by Nick Nolte. Bill and Stephen lost touch after having a youthful dispute. Bill reluctantly agrees to let Stephen come, but Stephen may be too overweight to keep up. A series of comical adventures ensues.

A WALK IN THE WOODS has many funny lines and episodes, and spending some time with Redford and Nolte is definitely appealing. However, the dialogue contains many obscenities and profanities, along with some other crude content and innuendoes. The script is also a bit episodic, jumping from incident to incident. This makes A WALK IN THE WOODS feel more like a series of funny vignettes than a cohesive story. Naturally, A WALK IN THE WOODS could have done without the R-rated content. Extreme caution is advised.

(Ro, B, E, LLL, V, S, N, M) Light Romantic, philosophical worldview with some light moral elements about friendship and not taking life for granted, including married man has positive relationship with his loving wife, plus a couple light environmentalist comments, attitudes but nothing heavy handed; about 46 obscenities (many “f,” “s” and “h” words), 19 strong profanities, five light profanities, and a couple references to defecating in the woods; some comical violence such as an encounter with a couple bears in the woods, falling, angry husband pounds on motel door, man accidentally sinks in mud; implied oral sex between engaged couple when the man and woman in a car pick up the two protagonists, a joke about getting a venereal disease during a youthful trip to Europe, unmarried man flirts with woman who turns out to be married, motel owner seems interested in Robert Redford’s married character, but nothing happens, and a couple crude verbal references to fornication; partial rear male nudity in one shot when man bends over; no alcohol use, but one character is years in sobriety after having had a drinking problem, and he hides a bottle of liquor in his belongings to help him overcome his temptation to drink; no smoking or drugs; and, two men meet talkative conceited woman, who annoyingly brags about how much smarter and more competent she is than anyone else.

A WALK IN THE WOODS is a funny comic diversion starring Robert Redford and Nick Nolte about an older travel writer deciding to hike the 2,100 mile Appalachian Trail with an estranged friend he hasn’t seen in decades. Based on the bestselling autobiographical book by Bill Bryson, A WALK IN THE WOODS is too episodic and has lots of strong foul language and some crude innuendoes, so media-wise viewers will be disappointed despite the appeal and clear talent of its two stars.

Changing the timeline of the original book, the movie opens with American travel writer Bill Bryson and British-born his wife (named Catherine in the movie) living in New Hampshire after spending many years in England, where they met. Bill is glum about facing old age. After attending the funeral of a friend, he decides to hike the 2,100 mile Appalachian Trail from Georgia to Maine. His wife insists he bring a friend along, but no one really wants to spend several months hiking the famous trail.

Out of the blue, Bill gets a call from an old friend, named Stephen Katz in the book and movie, with whom he had a falling out as a younger man. Bill reluctantly agrees after Stephen assures him over the phone that he’s in shape. When Stephen steps off the plane, however, it’s clear Stephen has let himself get a bit overweight. The two men start hiking the trail in Georgia anyway, though Stephen has trouble keeping up in the beginning.

The rest of the movie details a series of comical adventures.

For example, the two men run into a talky know-it-all, who keeps telling them that she’s the smartest, most competent person she knows. Bill tries to contradict her about a couple things, such as his tent’s quality rating, but she’s adamant that he’s wrong, and she’s right. Bill and Stephen are eventually able to ditch her but run into a snowstorm and accidentally fall off the trail onto a ledge until getting rescued. Along the way, they stop at a couple rest areas and a hotel, where Stephen has a run-in with the husband of a woman with whom he arranges a secret rendezvous. During the whole time, Bill and Stephen compare life philosophies. Bill is more reserved and methodical while Stephen constantly goes with his gut, which often gets him into trouble, but which also ensures his life is never dull.

A WALK IN THE WOODS has a lot of funny lines and episodes (at his friend’s funeral during the opening, for instance, Bryson tells the widow it was a “pleasure” when she thanks him and his wife for coming to her husband’s funeral). Also, spending some time with Robert Redford and Nick Nolte is definitely fun. However, the dialogue contains a lot of obscenities and profanities, along with some crude content and innuendoes about relationships with women. The script is also a bit episodic, jumping from incident to incident. This makes A WALK IN THE WOODS feel more like a series of funny vignettes than a cohesive story. Finally, the movie has some environmentalist references. They aren’t heavy handed, but they reflect a more liberal political bent. That said, the movie is an inspiring celebration of the incredible beauty that one can find along the Appalachian Trail, one of America’s great scenic and hiking areas.

Ultimately, A WALK IN THE WOODS could have done without the R-rated content. Such content will prevent the movie from attracting a larger audience. Extreme caution is advised.