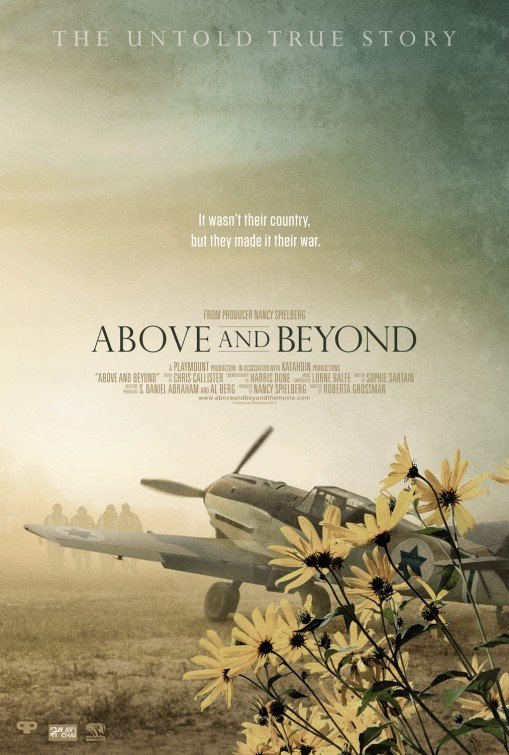 ABOVE AND BEYOND is an inspiring documentary about World War II pilots who volunteered to fight for Israel during its 1948 War of Independence. The day after Israel was established as a nation, they were attacked by the surrounding Arab countries. American and British pilots left home to help Israel defend itself against the Arabs and Muslims. They founded Israel's air force and fought off the invading armies. Through interviews with the pilots and battle footage, this unheard story of the war is told.

It is the subject of ABOVE AND BEYOND that makes it worth seeing more than anything. The small unknown acts of these pilots played a pivotal role in not only preserving Israel, but in shaping the world in which we now live. There are a handful of profanities and obscenities, brief stories about sleeping with women, and getting drunk. Anti-Semitism is heavily discussed and depicted. There are also numerous war scenes, including bodies being pulled from the rubble of bombed cities, and fighter planes shooting each other down. So, caution is advised for ABOVE AND BEYOND, for children especially.

(BB, C, Ab, AP, PP, L, VV, S, N, M) Strong moral worldview promotes the defense of Israel and the Jewish people, soldiers fighting for justice and peace, soldiers sacrifice their lives for the freedom of others, Arab nations vote against nationalizing Israel, Israel's enemies bomb and kill its Jewish citizens, and the United States and Europe refuse to help Israel defend itself against its enemies and even embargo arms to Israel, but American and British pilots come to Israel’s aid; five profanities and obscenities used, slang reference to woman's breasts; violence includes dead bodies being pulled from rubble, armies marching with weapons, soldiers, planes through the air and shooting at each other, planes dropping bombs on infantry caravans, and brief footage of soldiers in Nazi prison camps; soldiers mention sleeping with women during the war; soldiers shown with shirts off, men and women in bathing suits; talk about getting drunk; and, soldiers tell stories about stealing jeeps and getting drunk and several instances of lying to government officials so that military equipment could be smuggled into Israel.

ABOVE AND BEYOND is a documentary detailing the unheard story of American and British World War II pilots who volunteered to leave their families and fight in support of Israel in 1948.

In 1948, the world voted to establish Israel as a country, though many of its Arabic neighbors threatened invasion if this were to happen. David Ben-Gurion ushered in a new era of independence on May 14, 1948, but the celebrations were short-lived. The next day Israel was at war, fighting for its survival. The odds were heavily stacked against them. They had no organized military, and no air force, which was crucial to victory.

The United States and Europe largely supported Israel, but refused to become involved in the war. The U.S. established an embargo, preventing any delivery of arms or military equipment. The Israelis understood that the only way they were going to get help was to circumvent the government and recruit volunteers who were sympathetic to their cause; most of them Jews themselves. Without a single plane to their name, military and government officials reached out to American and British pilots. Thus, the Israeli Air Force was born, comprised of only two American pilots and two planes. They quickly flew their first mission, bombing the Egyptian invading infantry who were mere miles from the border, stopping them in their tracks.

What began as two planes blossomed into a larger force as new volunteers arrived, and more planes were brought from American junkyards, then smuggled into Israel. Eventually, Israeli pilots could be trained, but not before many of the foreign volunteers paid for Israel’s independence with their lives. Each pilot’s story is told, and the clandestine operations to make it all happen are revealed to an audience who likely are oblivious to this hidden chapter of history.

ABOVE AND BEYOND blends historical footage with realistic CGI re-creations of pilot missions to emphasize the stories as some of the pilots themselves narrate them. This greatly helps to bring history alive and allow the audience to experience it as it happened. Perhaps, it is the subject of the documentary that makes it worth seeing more than anything. The small unknown acts of these pilots played a pivotal role in not only preserving Israel, but in shaping the world in which we now live. It is a story that should be heralded on the same stage as D-Day, and it’s quite shocking to have that revelation and wonder why so few are aware of this brief, yet important moment in history.

There are a handful of profanities and obscenities uttered during the pilot interviews, as well as mentions of sleeping with women during the war, and getting drunk. Anti-Semitism is heavily discussed and depicted, not only of Israel’s enemies, but also by the United States as it refused to help Israel defend itself under the Truman administration. There are also numerous war scenes depicted, including bodies being pulled from the rubble of bombed cities, and fighter planes shooting each other down. Therefore, discretion is advised for ABOVE AND BEYOND, for children especially.

Rent or Buy ABOVE AND BEYOND: