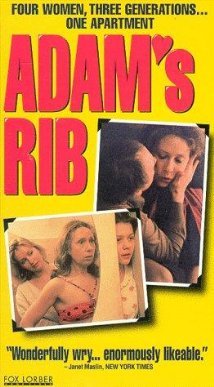 ADAM'S RIB, a tri-generational tale of sexually active Russian women, is an unappetizing grill of promiscuity and corruption. Not only does it lack integrity, but it also lacks sufficient conflict to keep viewers interested.

ADAM’S RIB, a tri-generational tale of sexually active Russian women, is an unappetizing grill of promiscuity and corruption. Not only does it lack integrity, but it also lacks sufficient conflict to keep viewers interested. The movie focuses on four women: Nina, Lida, Nastya, and grandma. Nina is a two-time divorcee, who fornicates with her wishy-washy beau, Evgeny. Her oldest daughter, Lida, is ensnared by an adulterous relationship with her boss, while 15-year-old Nastya is pregnant, chain-smokes cigarettes and speaks disrespectfully to everyone. Also living at home is their speechless, bedridden grandmother.

In spite of its lackluster storyline, ADAM’S RIB offers cultural insights into deteriorating Russian society. If one can simultaneously observe subtitles and nonverbal behavior, the characters’ facial expressions, gestures and ways of relating to one another seem quite unique. Evidently, the movie title alludes to the Old Testament account of the Lord taking ADAM’S RIB to create Eve (Genesis 2:21-23). However, this metaphor seems superficial rather than developed as an integral theme. Thus, as it is, ADAM’S RIB offers little hope for man and the institution of marriage.