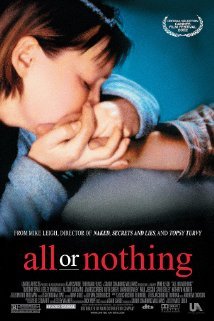 ALL OR NOTHING, directed by Mike Leigh, is set in London and tells the story of taxi-driver Phil and his family, who are the barely working, bottom dwelling people in British society. Although Phil and Penny never got married, they are glued together as if they were, in spite of the trials and tribulations. Their family consists of daughter Rachel, who cleans at a home for elderly people, and their son, Rory, who is an unemployed and mean-tempered drunkard. They are surrounded by lower class friends and neighbors such as Maureen, who has an angry, rebellious daughter who is pregnant by a physically and mentally abusive boyfriend.

These people’s lives and language are vile, but there is a desire for morality and normalcy which gives ALL OR NOTHING, a strange, sweet quality. Regrettably, the movie comes chock full of foul language and abuse. Phil’s attitude that, “You're born, you die. That's it,” states the materialist worldview of the movie with resounding clarity. The people in ALL OR NOTHING need something more than fatalistic atheism; they need the love of Jesus Christ who can bring revival and redeem them from their fallen natures.

Renowned director Mike Leigh says, “Everyone is interesting, but my mission is to make films about ordinary people.” Mr. Leigh is not talking about ordinary middle class people, rather he refers to the barely working, bottom dwellers in British society. These people’s lives and language are vile, but there is a desire for morality and normalcy that gives Mr. Leigh’s new movie, ALL OR NOTHING, a strange, sweet quality.

Set in a London housing development over a long weekend, ALL OR NOTHING tells the story of taxi-driver Phil and his family. Although Phil and Penny never got married, they are glued together as if they were, in spite of the trials and tribulations. Phil is a gentle, philosophical materialist. His attitude about life is simple: “That’s what’sit, innit? Fickle finger of fate. I mean, if you knew what was going to happen to you when you woke up in the morning, you’d never get out of bed. That’s life . . . the old clock ticks; world turns ‘round, tide comes in, tide goes out. You’re born, you die. That’s it.”

Penny works at a supermarket checkout. Their daughter, Rachel, cleans at a home for elderly people, and their son, Rory, is unemployed and mean tempered. Even though they stick together, Penny’s love for Phil has run dry, perhaps because he doesn’t get up in the morning and barely provides for his family. Phil, in turn, has withered without her love.

The couple is surrounded by lower class friends and neighbors. One such character, Maureen, who works with Penny, has an angry, rebellious daughter who is pregnant by a physically and mentally abusive boyfriend who constantly screams the “f” word. Rory and companion Carol are falling down, sloppy drunks, so much so that Carol can’t dial the emergency phone number for the ambulance when crisis comes. Their daughter flirts with everyone, wants to sleep with anyone and stands around the housing project all day with a young man who seems highly retarded. He decides he loves her so much that he carves a bloody “s” into his chest with a pen knife.

When Rory has a heart attack and has to be rushed to hospital, they are finally brought together to rediscover their love. Maureen, who has more common sense and talent than any of the others, saves Rory, and many of the neighbors become involved in Rory’s crisis. All experience an emotional journey.

There is much to like in ALL OR NOTHING. Love triumphs in the end. People try to make do and make it through. The acting is superb as in most Mike Leigh movies. Mr. Leigh achieves this high level of artistry by allowing the actors find their characters and rehearse their roles for three months prior to filming. The result is a well-realized, well-acted movie, with particularly memorable performances by Timothy Spall and Ruth Sheen.

The problem with ALL OR NOTHING is not just the abundance of foul language, (139 obscenities which are mostly the “f” word repeated in every other breath), or the intense abuse by Rory or the angry boyfriend, but Phil’s practical atheism. In a subtle sense, perhaps unintentional, atheism prevails in this world because these people don’t understand that there is more than this life, yet they try to do the right thing, even though, according to this humanist perspective, society conspires against them.

In fact, during the press conference, Mike Leigh said that he believes that crisis produces redemption. In other words, man is basically good, society and circumstances push him down and crisis brings out the best in him. This “crisis brings out the best in people” is an interesting device to overcome one of the major flaws of atheism, that without some higher power, people would follow their own selfishness into savagery.

Regrettably for those who hold to this atheistic theory, history and everyday reality show that God’s word is a more accurate portrait of people. When the sophisticated, beyond religion Germans experienced the crisis of the collapse of their economy in 1929, they turned to dictatorship and started cannibalizing their own people and culture. The same happened in Spain, Italy and Russia when crisis came. During the Rodney King riots, people ran amuck in Los Angeles and started to brutalize each other. Crisis more often than not brings out the worst in mankind — its sin nature, not the best, although there are certainly examples of the opposite occurring such as the show of heroism after 9/11.

In other words, these people need something more than fatalistic materialism. They need the love of Jesus Christ who can redeem them from their fallen natures. During the great Wesleyan revivals in 19th Century England, thousands of members of the lowest classes came to Jesus Christ and were transformed, even going from prison to the highest levels of trust in the society. This is the message that those bottom dwellers in the projects in England need to hear, not that they should wait for a heart attack to love one another. Revival is the answer, not practical atheism.