ANCIENT ROADS FROM CHRIST TO CONSTANTINE 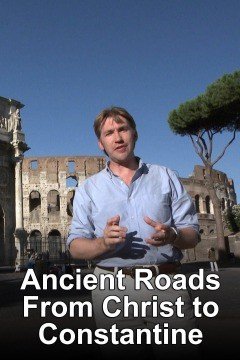 ANCIENT ROADS FROM CHRIST TO CONSTANTINE is a six-part television series. Using interviews with fine scholars and church leaders, it features Historian Jonathan Phillips of the Royal Holloway University of London. Phillip travels around the Middle East and Europe to discuss Christianity’s first 310 years. The first hour-long episode focuses on the life, teaching, death, and resurrection of Jesus Christ. Professor Phillips then discusses the importance of the Apostle Paul, Peter and John. He then talks about the first disciples of John and their disciples. Discussion of the Christian martyrs and early heresies in the second and third centuries follows. The last hour details the life of the Emperor Constantine.

ANCIENT ROADS FROM CHRIST TO CONSTANTINE is a magnificent masterpiece of historical information and poignant, dramatic stories. It wonderfully recounts the impact Jesus Christ, His apostles and the first Christians had on the world. The miniseries clearly shows God working through history, in the Divine Person of Jesus Christ and the lives of Christ’s followers. Thus, it has a strong pro-Christian worldview. ANCIENT ROADS shows the importance of Christian charity and brotherly love.

(CCC, BBB, V, N, M) Very strong Christian, biblical worldview in a six-part series featuring a historian traveling the Middle East, Turkey and Europe to discuss the life of Jesus Christ, His apostles and early church fathers up through Emperor Constantine and his influence on world Christianity; no foul language; some paintings and light description of violence from the Passion and Crucifixion of Jesus Christ through the beatings the Apostle Paul received, and many Christian martyrs, plus the sacking and destruction of Jerusalem by the Romans and the battle which made Constantine sole Emperor of the Roman Empire (includes a painting of two lions biting St. Ignatius in the arena and drawing blood); no sex, just a few references to sexual sin; images of semi-nude statue of the pagan goddess Artemis, male nudity in some paintings and a naked baby is shown being baptized in a modern Greek church; no alcohol; no smoking or drugs; and, some minor historical details may be debated (six-part series is an overview of the first 310 years of Christianity).

ANCIENT ROADS FROM CHRIST TO CONSTANTINE is a six-part television series that aired on PBS. It features Historian Jonathan Phillips of the Royal Holloway University of London traveling around the Middle East, Turkey and Europe to discuss the first 310 years or so of Christianity. ANCIENT ROADS is an excellent survey of New Testament history and beyond, including the life of the Apostle Paul, early church fathers such as Polycarp, Ignatius, Ireneus, and Tertullian, the early Christian martyrs, and the lives of St. Augustine and the Emperor Constantine.

Using some interviews with other historians, other scholars and contemporary church leaders in the cities Prof. Phillips visits, the first hour episode focuses on the life, teaching, death, and resurrection of Jesus Christ. Prof. Phillips then goes on to discuss the life and teaching of the Apostle Paul and how the Apostle John wrote his Gospel and the Book of Revelation. He then tell about the first disciples of John and their disciples, including Polycarp and Ireneus. Discussion of some of the first Christian martyrs and the early heresies in the church in the second and third centuries follows. Finally, the last episode focuses on the Constantine, the first Christian emperor of Rome who established Christianity as the most favored religion. Constantine and his mother, St. Helena, funded and built many Christian churches around the Roman Empire, including churches at many of the holy sites of the Holy Land, sites that have been preserved through the centuries to our own time. The series ends with the Council of Nicea in 325 A.D., the first church council after the Jerusalem council in Acts 15, and the death of Constantine in 337 A.D, about 310 years after Jesus reportedly began his ministry.

Professor Phillips visits many ancient ruins, many cities and many ancient churches to tell the story of the early Christians. These visits, coupled with the Professor’s captivating discussion and commentary, bring the lives of the earliest Christian disciples and leaders to life. Happily, Prof. Phillips doesn’t neglect major female church leaders and benefactors, such as Lydia of Philippi (Acts 16:13-15), Phoebe of Cenchrea (Romans 16:1), and Constantine’s mother, Helena. The martyrdom of Perpetua in 203 A.D. is an extremely poignant story that influenced the Early Church in the Third Century. Perpetua left a diary of her experience, and an editor added a description of her martyrdom in the arena in Carthage.

ANCIENT ROADS FROM CHRIST TO CONSTANTINE is a magnificent masterpiece of historical information and poignant, dramatic stories. Six episodes running about 56 minutes each wonderfully recount the impact that Jesus Christ, His apostles and the first Christians had on the world.

The miniseries clearly shows God working through history, not only in the Divine Person of Jesus Christ, but also in the lives of Christ’s followers. Thus, it has a strong Pro-Christian worldview. It also shows the importance of charity and brotherly love that is the hallmark of any true disciple of Jesus.

There are only a few minor debatable elements in the series. For instance, Prof. Phillips tells the apocryphal story of Thekla of Iconium, whose martyrdom story was not accepted by all the early church fathers because of its overly dramatic nature and fantastic miracles. He also sticks with a date for the Apostle John’s writing of the Book of Revelation to sometime after 90 A.D. on the Island of Patmos. This date is disputed by some major scholars, but Prof. Phillips visits John’s living quarters on Patmos, which include the spot where John’s bed laid, where John supposedly had the visions recorded in the Book of Revelation. A painting on the wall shows John’s vision of Jesus from Revelation.

Be that as it may, ANCIENT ROADS remains an excellent introduction to the Gospel of Jesus Christ, the New Testament documents, Christ’s apostles, and the incredible but true historical events they inspired.