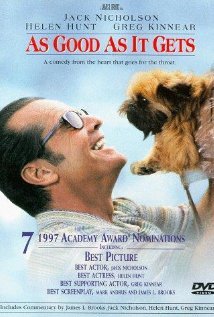 Watch AS GOOD AS IT GETS:

Writer: Writer/director James L. Brooks has made some of the most memorable comedies in recent times, including the perverse TERMS OF ENDEARMENT, BROADCAST NEWS. His intelligent characterizations, real emotionality are trademarks of his work, AS GOOD AS IT GETS is no exception. It has good writing, directing, acting. All of the characters perform their best. Even small roles like Cuba Gooding Jr. have good lines, give good performances.