"Revered Son Avenges His Father in a Pagan World" 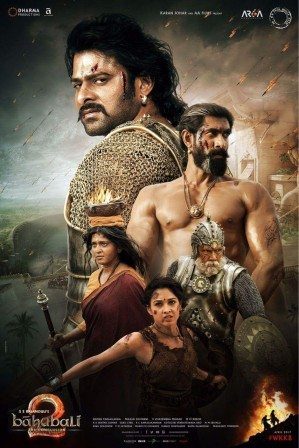 BAAHUBALI 2: THE CONCLUSION is a fantasy epic from South India. Most of the movie is a flashback story where a young warrior learns how his father, a prince, was framed by his stepbrother and executed. The stepbrother killed their mother, seized the throne and imprisoned the father’s wife. The son, however, was rescued by the dying mother and adopted by a distant village. After learning this story, the son must now rally an army of rebels to defeat the evil stepbrother turned king and restore peace to the land.

BAAHUBALI 2: THE CONCUSION is set in a pagan world, with animal sacrifices to pagan idol, yet the heroic characters operate with moral principles. The father cites the “Law of Dharma” several times, saying there’s a higher, more righteous law that all men must obey. Also, both the father and son are willing to die for the people. That said, MOVIEGUIDE® advises extreme caution for the violent battle scenes in BAAHUBALI 2. Also, the strong pagan worldview and scenes of idol worship and animal sacrifices in BAAHUBALI 2 are abhorrent and unacceptable.

(PaPaPa, B, C, VVV, N, A, MMM) Very strong pagan worldview includes some idol worship and animal sacrifices, with some characters displaying a moral code and light redemptive elements where the hero is a messianic figure trying to restore peace to the kingdom, though one main character calls the “Law of Dharma” a higher law that all men must obey, but the Law of Dharma comes from the polytheism of the Indo-Aryans who migrated into Northern India; no swearing, but strong warlike language at times including a wish to send someone to Hell; very strong and strong violence includes several battle scenes, decapitation, hacking a dead body with an ax, man screaming in flames as he burns to death; no sexual immorality or sex scenes, only one light kiss and an embrace; brief upper male nudity; alcohol use by one character; no smoking or drugs; and, lying, revenge, greed, jealously, political maneuvering, pride, arrogance.

BAAHUBALI 2: THE CONCLUSION is a fantasy epic from South India that concludes a two-generation Baahubali father and son story, which tells how the father died, and how the son and the father’s wife avenge his death and bring peace to the kingdom. BAAHUBALI: THE BEGINNING ended on the battlefield, which is where BAAHUBALI 2 begins. The dominant worldview of the movie is strongly pagan displaying offerings to various idols, however there is a clear delineation between good and evil. The original language is Telugu, but the version screened was dubbed in Hindi with English subtitles.

Most of this sequel tells what happened to Shivudu’s father, Mahendra Baahubali. Mashishmati is a mythical ancient kingdom of India that includes a pagan, polytheistic view of life. The Queen Mother Sivagami endures a daring ritual that involves carrying coals on her head to the demon temple in order to placate the demon. An elephant which “stands guard” at the temple, goes crazy as if demon possessed and charges for the Queen Mother. Mahendra saves the Queen Mother from being trampled and pacifies the demonic elephant. The Queen Mother is grateful for Mahendra’s ingenuity and bravery. She proposes that he go on a tour of the kingdom prior to his coronation.

Kattappa accompanies Mahendra for the tour. He happens upon a smaller kingdom and falls in love with a warrior princess. The love story between the Crown Prince Mahendra Baahubali and Princess Devasena unfolds. Unknown to Mahendra, the Queen Mother Sivagami has already promised the hand of Princess Devasena to Mahendra’s evil stepbrother, Prince Bhallaladeva, who illicitly desires to marry Devasena.

In the confusion, Devasena rejects the marriage proposal and angers the Queen Mother. She orders Prince Mahendra to return to Mahishmati with Devasena as his prisoner. By this point, Mahendra has proven his love and care for Devasena’s people, so she goes willingly with him. Mahendra makes a point to maintain the chastity of Princess Devasena until he might have her hand in marriage.

The two main “Tollywood” song and dance segments take place during the love story. They are considerably less sensual than the dances in the first movie. However, the first song and dance is performed by Princess Devasena and her harem to a flute-bearing idol with flower petal offerings made to the idol. The second song and dance is performed on a creative swan ship that transports the love birds back to Mahendra’s country, Mahishmati. The dance ends with a light kiss between the betrothed Mahendra and Devasena.

Mahendra is transferred to another part of the kingdom. Now bearing Mahendra’s child, Devasena tries to enter the temple, but she’s accosted by Mahendra’s princely replacement. Devasena cuts off his fingers. She’s shackled and held for trial. Mahendra arrives to question her. Upon Devasena’s testimony, Mahendra cuts off the man’s head. The Queen Mother is aghast and casts Mahendra and Devasena out of the palace.

Nonetheless, the people still flock to Mahendra. Driven by jealously, the stepbrother concocts a plan to frame Mahendra for an attempted assassination. The Queen Mother orders him to be killed. As a sworn slave to the kingdom, a man named Kattappa as a sworn slave to Mahishmati must carry out the order. Though tormented by the order, Kattappa carries it out.

The stepbrother gloats over Mahendra’s dead body and confesses his murderous plan to frame have him framed. Kattappa overhears the evil stepbrother’s confession. He informs the Queen Mother of the real culprit, and she returns to her senses. She realizes that she returned evil for Mahendra’s good toward her.

Devasena arrives at the palace with a newborn boy in her arms. The evil stepbrother seeks to kill the baby. Meanwhile, the people have assembled under the balcony at the palace wait for news about Mahendra. The Queen Mother walks out to the balcony with the baby in her arms and pronounces that Mahendra is no more, and proclaims the child as Amarendra Baahubali, the new King of Mahishmati.

Kattappa helps the Queen Mother escape with the baby through a secret passage. The evil stepbrother waits for her to emerge some distance from the palace and shoots his own mother in the back with an arrow. She falls into the river, which was the opening to the first movie, BAAHUBALI: THE BEGINNING.

With the completion of the storytelling, Kattappa and Shivudu aka Amarendra Baahubali now stand on the battlefield. Now that he knows how his father died, Shivudu calls the people to arms. They must devise a way to battle the relentless warriors led by the evil stepbrother who had stolen the throne. A great battle ensues.

With his rebel army is outmatched, can Shivudu defeat the evil king and restore peace to the land?

The story of BAAHUBALI 2: THE CONCUSION is set in a pagan world, with animal sacrifices to pagan idol, yet the heroic characters operate with moral principles. The father cites the “Law of Dharma” several times, saying there’s a higher, more righteous law that all men must obey. Also, both the father and son display a willingness to die for the people. That said, MOVIEGUIDE® advises extreme caution for the violent battle scenes in BAAHUBALI 2, which is among the most popular movies from India ever shown in the United States and Canada. Also, the movie’s strong pagan worldview, scenes of idol worship and animal sacrifices are abhorrent and unacceptable. Some of the scenes of idol worship in BAAHUBALI 2 include benign things such as offerings of flowers, while others include fire and crazed animals. Finally, the diabolical bent of the villain is a bit unnerving.

Note: The Law of Dharma originates from the early polytheistic culture of the Indo-Aryans who migrated into Northern India and has been adopted and revised by later religions in India, including Hinduism and Buddhism.