"An Amazing Story with Too Much Edge" 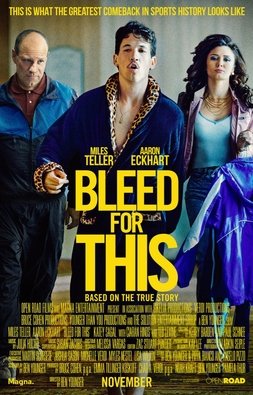 BLEED FOR THIS is an incredible underdog story of grit and perseverance that seems unbelievable at times. Miles Teller is exceptional as Vinny Paz. The movie’s worldview is mixed. There are moments where Vinny’s mother spends time praying for Vinny during every fight. Also, Vinnie’s perseverance over extreme obstacles is very admirable. However, all his focus is on boxing above everything. In addition, there’s lots of strong foul language and three scenes set in a fully nude strip club. So, BLEED FOR THIS falls into Movieguide®’s excessive category.

(PaPa, HH, B, CC, LLL, VV, SS, NNN, AAA, D, MM) Strong mixed pagan worldview with strong objectionable content, strong humanist elements where a man has nothing but boxing and succeeds on his own, but his character has moral traits of hard work and perseverance over adversity, and strong overt Christian elements where protagonist’s mother prays for her son in her prayer room during every boxing fight; at least 55 obscenities (mostly “f” words) and 14 strong profanities; strong boxing violence with some blood, an intense car accident leaves man bloodied and another with a broken neck, man has metal brace unscrewed from his skull after wearing it for six months; no depicted sex, but strong sexual content during three scenes involving a fully nude strip club, plenty of flirting, some foreplay that doesn’t lead to anything, and it’s implied that a father is being unfaithful to his wife; full female nudity in three different scenes, upper male nudity, man wears revealing speedo; lots of drinking and drunkenness; no drug use, but lots of smoking; gambling and dysfunctional family portrayals.

BLEED FOR THIS stars Miles Teller in the true boxing story of Vinny Paz, a world champion boxer who defends his title even after a car accident leaves him with a broken neck.

Starting in 1988, Vinny is in his mid 20s living with his Italian family in Providence, Rhode Island. He struggles to make the weight as a lightweight boxer. Also, after a fainting spell resulting from dehydration during one of his matches, Vinny’s encouraged to give up boxing.

However, Vinny begins working with an alcoholic trainer, Kevin Rooney, who trained Mike Tyson. Kevin encourages Vinny to jump classes and fight as a junior middleweight boxer. Though a risky move, Vinny does this and ends up winning a title.

Sadly, though, not long after winning, Vinny is in a car accident that breaks his neck, and the doctors fear he may never walk again. Instead of fusing his neck surgically, Vinny decides to wear a metal brace called the Halo for six months that screws into his skull with four bolts, to allow his neck to heal and keep his dream alive of one day fighting again.

Everyone around Vinny believes his career is over, but he refuses to give up. Even with the metal brace screwed into his head and with a severed neck, Vinny begins training in his parents’ basement and eventually even enlists his trainer Kevin to help. After six months, the Halo is removed and Vinny starts preparing to defend his title. His managers eventually get him a fight as the world watches to see whether Vinny can do what everyone said was impossible.

BLEED FOR THIS is an incredible underdog story of grit and perseverance that sometimes seems unbelievable. Miles Teller is exceptional as Vinny Paz, and Aaron Eckhart loses himself in the role of Vinny’s trainer, Kevin Rooney. The movie has a slow start and takes too long getting to the car accident. Vinny’s story is an amazing feat, but is short of being awe-inspiring because of Vinny’s edgy personality and almost superhuman ability to endure pain. He’s an interesting character to watch, but not appealing or empathetic enough. Adding to all this is the fact that Vinny’s whole life revolves around boxing. In fact, he says he’s nothing without boxing.

The movie’s worldview is mixed.

On the positive side, there are overt Christian moments where Vinny’s mother spends time praying for Vinny during every fight. Also, Vinny’s perseverance over extreme obstacles is very admirable. Vinny also refuses to drink or do drugs, and he even goes so far as to refuse to take pain medication when the doctors unscrew the Halo cage from his head.

On the negative side, while Vinny’s story is incredible and his victory inspiring, it borderlines on being irresponsible due to his lack of perspective on life and his obsessive focus on boxing above almost everything. Even Vinny’s own father, who pushed him his entire life, couldn’t support Vinny when he tries to make a comeback after his life-threatening accident. Finally, most objectionable are the movie’s frequent obscenities and profanities, along with three scenes set in a fully nude strip club.

So, ultimately, BLEED FOR THIS falls into MOVIEGUIDE®’s excessive category.