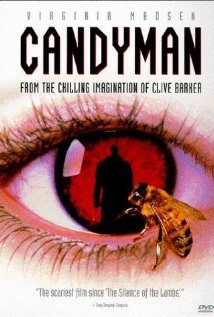 In CANDYMAN, anthropology student Helen Lyle investigates the myth of Candyman and discovers that Candyman was the talented and educated son of a slave who impregnated a white woman. As a result, his hand was cut off, and his killers threw him into a swarm of bees, and he was stung to death. In the movie, Candyman has come back from the dead and has killed 21 people. CANDYMAN contains unbelievable blood, gore and satanic symbols.

In the film CANDYMAN, anthropology student Helen Lyle investigates the myth of Candyman and discovers that Candyman was the talented and educated son of a slave who impregnated a white woman. Subsequently, his hand was cut off, and he was thrown into a swarm of bees and was stung to death. Candyman has now come back from the dead, has a horrible hook for a hand and has murdered 21 people. Candyman gradually gets a psychological hook, so to speak, in Helen as she finds herself increasingly drawn to him. After an implied seduction, he offers Helen on a satanic altar replete with candles. At film’s end, Helen experiences a kind of apotheosis after she burns to death. Shortly, she, too, comes back to haunt and kill just like her demented mentor.

Violence and gore aside, CANDYMAN disturbs for other reasons. The movie contains considerable occultic and satanic symbolism. Further, Candyman, the person, turns out to be a larger-than-life person, who, like Jesus Christ, has risen from the dead and also appears and disappears at will. He has complete control over Helen, and at film’s end, he offers her on a satanic altar. The movie is bound to instill much fear in its viewers.