CASINO JACK AND THE UNITED STATES OF MONEY 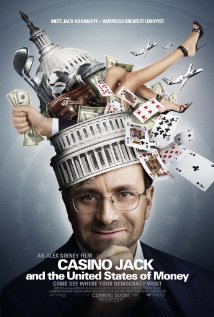 CASINO JACK AND THE UNITED STATES OF MONEY is a documentary on the political scandals involving Jack Abramoff. It explores the rise and fall of Abramoff, a Jewish conservative who led the College Republicans during the Reagan era in the 1980s. Abramoff’s talent for raising money led him to become a lobbyist and campaign fundraiser, mostly for Republicans like former U.S. Congressman Tom DeLay, former Congressman Bob Ney and even President George W. Bush. Abramoff’s lobbyist work for the Northern Marianas Islands and for Native American tribes involved in casino gambling helped him raise lots of campaign dollars for Republican candidates. It also led to a lot of alleged shady dealings that earned Abramoff and Congressman Ney jail terms, and even ensnared a noteworthy Christian activist.

CASINO JACK AND THE UNITED STATES OF MONEY could have been much better if it had dropped its anti-capitalist, big government conclusions attacking America’s economic system. In reality, capitalism creates jobs, wealth and prosperity, and big government, complicated laws, complex regulations, and high taxes destroy them. The movie contains plenty of strong foul language and does not have real debate. Thus, it is incomplete and propagandistic.

(HH, AbAb, AcapAcapAcap, SoSoSo, APAPAP, LL, V, S, A, D, M) Strong humanist, anti-conservative worldview with a snide and strong, but brief, Anti-Christian tone attacking some in the religious right (suggesting that all Christian conservatives are bad), with a very strong anti-capitalist, pro-socialist viewpoint in conclusion that crudely attacks, with no debate, America’s free market values and argues for socialist campaign finance reform, which are the movie’s real ideological focus; about 15 or so obscenities (mostly “f” words) and zero profanities; re-staged drive-by shooting and some newsreel footage and references of fighting in Central America and Angola during the 1980s; no depicted sex but discussion of prostitution and shots of Asian women on a Pacific island in bars and on streets, suggesting they are prostitutes; no nudity but some short skirts; alcohol use; smoking; and, some racial slurs but implicitly rebuked and a propagandistic tone, but not as overtly strident or full of biased factual falsehoods as in Michael Moore’s movies.

CASINO JACK AND THE UNITED STATES OF MONEY is a documentary on the scandals involving Republican fundraiser and gambling lobbyist Jack Abramoff. Regrettably, CASINO JACK approaches its subject from an anti-capitalist, big government viewpoint. We say regrettably because the Abramoff scandal serves as an important reminder to Christians and conservatives of every stripe to be careful about their business and political dealings while they try to serve God, family and country.

The documentary explores the rise and fall of Jack Abramoff, a Jewish conservative who at one point led the College Republicans during the Reagan era in the 1980s. Abramoff’s talent for raising money led him to become a lobbyist and campaign fundraiser, mostly for Republican Congressmen like former U.S. Rep. Tom DeLay, former Rep. Bob Ney and even President George W. Bush. His lobbyist work for the Northern Marianas Islands and for Native American tribes involved in casino gambling helped him raise lots of campaign dollars for Republican candidates. It also led to a lot of allegedly shady dealings that earned Abramoff, Rep. Ney and one of Abramoff’s business partners, Michael Scanlon jail terms. Among other things, the movie alleges that Abramoff sold access to Republicans like DeLay, Neff and President Bush in return for campaign donations.

Eventually, according to the movie and other sources, Abramoff’s activities ensnared former Christian Coalition leader Ralph Reed, who started his own lobbying and political campaign company friendly to Abramoff’s own companies after leaving the Coalition. Reed, who denies any wrongdoing, has not been indicted, but federal prosecutors have subpoenaed his records. Strangely, the movie fails to make clear what Abramoff himself actually pled guilty to in court that sent him to jail. According to a Jan. 4, 2006 story in the Washington Post, however, Abramoff pled guilty to “tax evasion, fraud and conspiracy to bribe public officials” (http://www.washingtonpost.com/wp-dyn/content/article/2006/01/03/AR2006010300474.html).

CASINO JACK AND THE UNITED STATES OF MONEY could have been much better if it had dropped the anti-capitalist, big government conclusions at the end that attack the American Dream. In reality, capitalism creates jobs, wealth and prosperity, and big government, complicated laws, complex regulations, and high taxes destroy them. The movie also fails to get Abramoff or Ralph Reed to sit down for any interviews, though DeLay does appear several times in an interview that doesn’t tell the viewer much of anything.

The movie’s anti-capitalist, big government worldview includes a support for public financing of election campaigns. Public financing, however, is a socialist trick that gives way too much power to faceless government bureaucrats and government campaign regulation agencies far removed from the people. Giving that much power to government has already led to much abuse of power by the government, including censorship of political and religious speech. The problem of campaign fundraising is not one of large campaign contributions, or even contributions from big business (much less free market capitalism), but one of secrecy in political fundraising, including the fraudulent practice of money laundering, not to mention bribery. Last time we checked, bribery and money laundering were criminal felonies, so why do we need to institute an even more complicated system of new campaign fundraising laws and more government regulations?

The movie’s leftist, utopian attack on American capitalism is fundamentally flawed. Contrary to the filmmakers of CASINO JACK, profit is not a dirty word, and business must be allowed to flourish honestly so that the average citizen has the chance to improve the economic status of himself and his family.

First, it criticizes them for letting the business and government climate in the Northern Marianas Islands exploit immigrant workers, especially Asian female workers who cannot pay the exorbitant fees for moving them to the islands, so they often, allegedly, have to turn to prostitution. Apparently, competition from China has worsened this problem, because of the increased closure of garment factories on the islands.

Then, the movie attacks the conservative associates, especially Ralph Reed, for getting involved with Ambramoff’s controversial casino connections. Ultimately, however, it fails to show clearly, however, that Ralph Reed personally knew about any of Abramoff’s apparent double-dealing among Indian casinos and various pro- and anti-gambling campaigns. A story by the Washington Post on Jan. 16, 2006 quotes Reed denying any wrongdoing in his company’s dealings with Abramoff and his firm, but adding, “If I had known then what I know now, I would not have done that work [http://www.washingtonpost.com/wp-dyn/content/article/2006/01/15/AR2006011500915.html].”

One of the movie’s most frustrating aspects is that it fails to give Republican, conservative leaders like former Congressman Tom DeLay a chance to reply to some of the specific charges it discusses. In fact, Delay and Rep. Neff seem to get no really hard questions from the filmmakers. Thus, the interview sections with DeLay and some of the other Republican, conservative officials caught up in the Abramoff scandals are ultimately unenlightening. They also seem to be designed to fit into the movie’s anti-conservative, Anti-Republican leftist, humanist worldview, including the movie’s socialist support of public campaign financing.

The movie says that Ralph Reed and Jack Abramoff declined to be interviewed, so we cannot blame the filmmakers for not getting their side of the story from them personally. Even so, the movie could have contacted their lawyers and perhaps gotten something and put that into their movie. So, why didn’t they?

Ultimately, CASINO JACK is incomplete and propagandistic. It seems to fit in with director Alex Gibney’s other left-oriented, Anti-American, anti-capitalist secular documentaries (ENRON: THE SMARTEST GUYS IN THE ROOM and TAXI TO THE DARK SIDE) and the leftist, secular worldview of the movie’s producers. MOVIEGUIDE® is still waiting for a Hollywood producer, independent or otherwise, to make a movie about the alleged lobbying, bribery and money laundering scandals in the Bill Clinton administration and the increasing number of alleged scandals in the Obama administration (including President Obama’s alleged links to Goldman Sachs, General Electric and British Petroleum) and alleged scandals among Democratic officials like Sen. Christopher Dodd, Rep. Barney Frank and Rep. Charlie Rangel. Perhaps when Hell freezes over. . . .