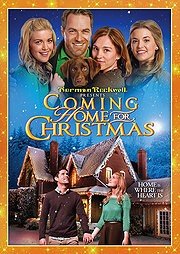 COMING HOME FOR CHRISTMAS is a sweet television Christmas movie with lots of heart. Kate and Melanie are estranged sisters. They used to be best friends, and the family got along wonderfully. After the two grew up, however, Kate walked out on Melanie’s wedding. Kate confronted her sister, Melanie, telling her that Melanie’s marriage was a mistake. After this, the two sisters didn’t talk for five years, and the family fell to pieces. Years later, the parents also want to split up. Melanie and Kate forgive each other and team up during Christmas to get their parents back together again. The new owner of their family’s old house helps them. Meanwhile, a romance brews between him and Kate.

(CC, BB, MM) Strong Christian, moral worldview about keeping family together, with Christian Christmas songs sung and angel ornaments; no foul language; no violence; kissing; no nudity; no alcohol use; no smoking or drug use; and, parents are separate, and man leaves his wife.

Kate and Melanie used to be best friends and the family got along wonderfully. When the two grew up, Kate walked out on Melanie’s wedding, confronting her that it was a mistake. After this, the two sisters didn’t talk for five years, and the family fell to pieces. Their mother and father, Wendy and Al, split from the stress of their daughters and growing angry. Hearing this news, Kate is broken hearted and decides to try to talk them both out of the split.

Both sides don’t want to get back together, however. Wendy is angry and sad from the loss of her daughter’s friendship and their house from financial debt, while Al doesn’t know how to handle Wendy’s anger.

Kate decides to go back to the old house, which her mother loves so much. There, she meets the new owner, Mike, a young handsome man. Later, Kate runs into Mike again at his woodcarving shop when she comes in with a request. The two start to spend more and more time together.

Still in distress about her parents’ separation, Kate decides to take action to get them back together. Extreme measures are taken when Kate goes to see Melanie and tell her the news of the split. The two are still hurt from each other, but forgive each other and decide to work on getting the family back. Mike decides to let Kate and Melanie plan their family Christmas at his house, their childhood home, in an attempt to reunite the family.

COMING HOME FOR CHRISTMAS is a sweet Christmas movie. It stresses the importance of Christmas and family. The two females lead actors, Carly McKillip and Britt McKillip, are cute and engaging. However, the plot itself isn’t filled with a lot of conflict. There’s overt Christian content with some Christian Christmas songs, but also one married couple is broken up. Overall, COMING HOME FOR CHRISTMAS is a sweet, entertaining movie.