"Regrets of a Profane, Hedonistic Life" 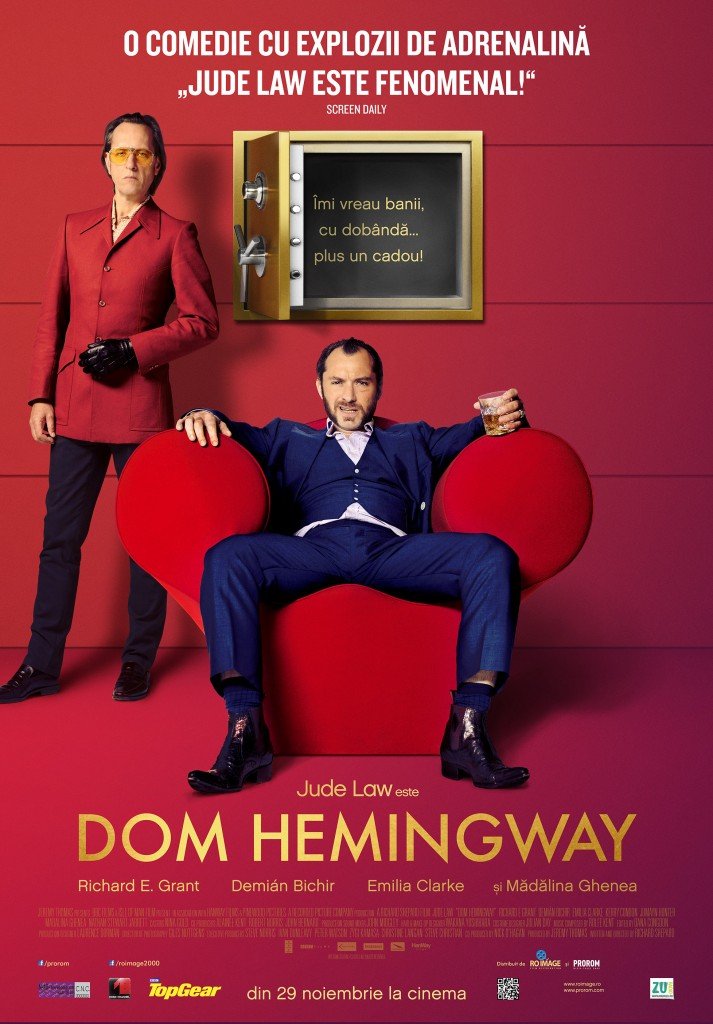 DOM HEMINGWAY is a very lewd adult comedy about an angry ex-convict and expert safecracker from England who keeps getting into trouble. Dom has spent 12 years in prison to protect his boss, a French gangster. Now, he’s looking forward to collecting from his the money he owes Dom for Dom keeping his mouth shut. Dom eventually gets the money but loses it in a bizarre and comical turn of events resulting from a drunken car crash. Chagrined, Dom returns to England and tries to reconnect with his daughter. However, Dom has to try to go back to cracking safes for a living, a situation that would destroy his chances of reconciling with his daughter.

DOM HEMINGWAY has a crude, comical tone throughout this story. Jude Law gives an enthusiastic, but over-the-top, performance as the title character. Also, the redemptive ending is particularly moving as Dom and his daughter finally start to reconcile with one another. To get there, however, the viewer has to sit through some pretty crude, obscene content. Ultimately, therefore, DOM HEMINGWAY isn’t an appropriate movie for media-wise moviegoers.

(C, B, PaPaPa, LLL, VVV, SS, NNN, AA, DD, MM) Light redemptive, moral worldview in dark comedy where a very crude, angry, conceited, hedonistic ex-convict gets a sort of comeuppance but eventually reconciles with estranged daughter in a spirit of repentance and forgiveness; at least 172 obscenities (including many “f” words), two strong profanities, and one light profanity; some very strong and strong violence includes drunken car crash, man has large piece of wood stuck through his torso, protagonist beats up man, and his face is shown very bloody, woman injured in car wreck but resuscitated, people run from gangsters, gangster threatens to castrate another gangster; strong sexual content includes very crude references to male body parts and homosexual behavior, crudely implied homosexual act, naked man shown briefly with two women in bed, small party at pool one night shows women cavorting topless; shots of frontal male nudity as man walks totally naked outside, shots of upper female in several scenes, and shots of rear nudity; alcohol use and drunkenness, including drunk driving; smoking and scenes of cocaine use; and, stealing, drunk driving, man in jail for safecracking, protagonist intends to return to safecracking, uncontrollable anger, ex-convict estranged from daughter, man insults host by making crude comments about his girlfriend or wife, and woman tells man that, since he saved her life, especially against his own interests, good luck will come to him when he least expects it.

DOM HEMINGWAY is a very lewd comedy about an angry ex-convict and expert safecracker who keeps getting into trouble but finds some redemption and success through the love he has for his estranged daughter. The movie and its filmmakers seem to favor the title character being able to control his anger and find some redemption, but the movie’s content is much too lewd to be morally, much less spiritually, acceptable.

The movie opens with one of the most obscene starts to a movie ever made, as a fellow convict services Dom Hemingway in prison. Cut to Dom getting out of prison, where he’s picked up by his friend, Dickie. An expert safecracker, Dom has spent 12 years in prison to protect his boss, a French gangster. Now, Dom and Dickie are looking forward to collecting from their boss, Mr. Fontaine, the money he owes them for Dom keeping his mouth shut.

Dom, however, is an angry, hedonistic, conceited fellow. Making matters worse, his wife died during the time Dom was in prison and, as a result, Dom never got to see their daughter grow up. So, it makes him mad having to kiss up to Fontaine just to get what Fontaine owes him. Dom’s anger gets the best of him during the meeting with Fontaine at Fontaine’s fancy villa in France. So, Dom has to smooth things over by obsequiously apologizing. Consequently, Fontaine gives Dom several hundred thousand English pounds for his silence.

All that money leads to a hedonistic party that gets out of hand, and Dom, Dickie, Fontaine, and three girls get into a terrible drunken car crash that kills Fontaine. Dom saves the life of one of the girls, but while he’s doing that, Fontaine’s girlfriend manages to return to the villa and steal all of Dom’s money.

After his experience, Dom tries to reconnect with his estranged daughter, but she doesn’t want anything to do with him. A singer, she also definitely doesn’t want him to be around the young son she has had with her husband.

With Fontane’s girlfriend on the lam and with no money and no prospects, Dom decides he has to go back to cracking safes for a living. However, even if he can get a safecracking job, that will just put reconciliation with his daughter even further away from him.

DOM HEMINGWAY has a crude, comical tone throughout this story. Jude Law gives what can only be described as an enthusiastic performance as the title character. In some ways, his performance reminds one of Leonardo DiCaprio’s performance in THE WOLF OF WALL STREET. One can admire the enthusiasm with which such over-the-top performances are accomplished, but are they really and truly great performances? This reviewer would say no, and, as better examples, point to the sublime nuances of great actors like Marlon Brando, Jimmy Stewart, Barbara Stanwyck, Cary Grant, Jena Arthur, or John Wayne who can move audiences with a slight and simple but meaningful look in their eyes, tone in their voice, or body movement that says volumes. For proof, we point to the taxi scene in Elia Kazan’s masterpiece ON THE WATERFRONT with Brando and Rod Steiger or these two brief scenes with John Wayne and company from John Ford’s masterpiece THE SEARCHERS.

That said, Jude Law and the rest of the cast in DOM HEMINGWAY do give good performances that hold the viewer’s attention and evoke laughter, disgust, sympathy, etc. The ending is particularly moving as Dom and his daughter finally start to reconcile with one another. It includes a couple brief touching scenes between Dom and his cute little grandson. To get there, however, the viewer has to sit through some pretty crude, obscene content. Ultimately, therefore, while DOM HEMINGWAY does move toward an uplifting redemptive conclusion, including a scene of forgiveness, it has too many and too obscene lewd moments. God would not want you to give this movie your support with your or your family’s money.