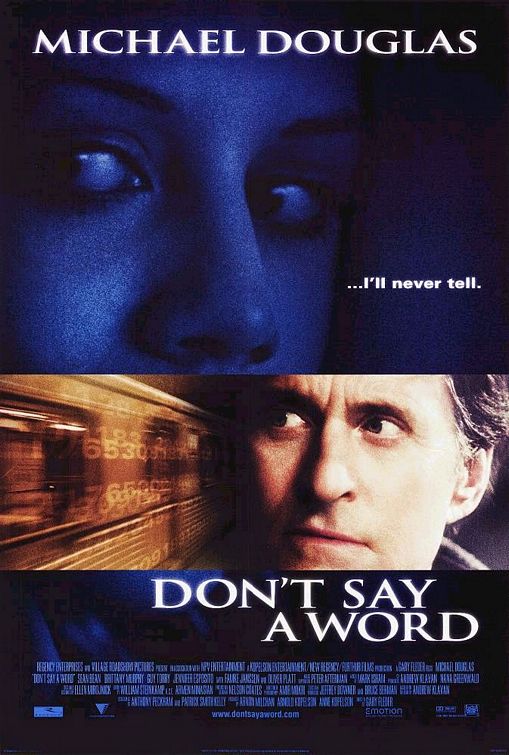 DON’T SAY A WORD is an excellent thriller with a strongly moral point of view. Michael Douglas stars as Psychiatrist Nathan Conrad. Nathan’s ready to enjoy Thanksgiving Dinner with his bed-ridden wife, Aggie, who has a cast on her leg, and their little daughter, Jessie. A former colleague, however, asks Nathan to see a patient on Thanksgiving Eve. Nathan learns that the patient, a troubled, catatonic young woman named Elisabeth, is very frightened of someone or something. He suspects she is faking some of her symptoms. Later during the night, some criminals secretly kidnap Jessie. They threaten to kill her unless Nathan can pry an important number from Elisabeth’s frightened mind. Nathan tries to find the number and save both Elisabeth and his daughter from the evil intentions of these horrible criminals.

DON’T SAY A WORD is a taut, well-directed and well-written thriller with a strong moral worldview and a strong, compassionate hero. Michael Douglas does an excellent job as Nathan, as does the rest of the cast, including Brittany Murphy as Elisabeth. Although good overcomes evil, DON’T SAY A WORD contains enough strong foul language and action violence to justify an extreme caution.

DON’T SAY A WORD is an excellent thriller with a strongly moral point of view.

Michael Douglas stars in the movie as Psychiatrist Nathan Conrad. Nathan is ready to enjoy Thanksgiving Dinner with his family, including his bed-ridden wife, Aggie, who has a cast on her leg, and their precocious little daughter, Jessie. A former colleague of his, however, asks Nathan to see a patient on Thanksgiving Eve. The patient, a troubled, catatonic young woman named Elisabeth Burrows, has been in and out of various mental wards for 10 years. After talking to her, Nathan thinks Elisabeth is very frightened of someone or something and, in fact, has learned how to fake some of her symptoms.

Later during the night, some recently released bank robbers secretly kidnap the Condrads’ daughter. The head villain, Patrick (played by Sean Bean), threatens to kill Jessie unless Nathan can pry an important number from Elisabeth’s frightened mind. The number will give the robbers the location of a priceless ruby, which a couple of their former associates stole from them following a major bank heist years earlier. Nathan tries to find the number and save both Elisabeth and his daughter from the evil intentions of these horrible criminals.

DON’T SAY A WORD is a taut, intelligent thriller with a strong moral worldview and a strong, compassionate hero who has a couple tricks of his own up his sleeve. It becomes obvious by the end of the movie that Nathan doesn’t just care about protecting his family, he also cares about the welfare and safety of Elisabeth. Not only that, but there is a point near the end where he could take ruthless revenge upon the villainous Patrick, but he doesn’t. Now, how refreshing is that?

Michael Douglas does an excellent job as Nathan, as does Brittany Murphy as Elisabeth. Famke Janssen also does a fine job as Nathan’s wife, as does Jennifer Esposito, who plays a dedicated New York City police detective tracking down the robbers and killers. Skye McCole Bartusiak is superb as Nathan’s clever, cute little daughter, Jessie, and Oliver Platt turns in his usual professional job as the psychiatrist who’s also being pressured to deliver the important number to Patrick. Finally, Sean Bean plays the head villain with the right amount of ruthless determination.

Based on a book by Andrew Klavan, DON’T SAY A WORD has some clever story twists that contain provocative images and themes. Director Gary Fleder cleverly ties these images and themes together. For example, there’s a series of mirror images that crop up frequently in the movie. Thus, there are two groups of robbers working at cross purposes in the gang and there are two little girls and two fathers threatened by Patrick and his group of cutthroat criminals. In fact, it is partly Nathan’s efforts to save his little girl that helps him empathize with the plight of Elisabeth, whose father tried to save her from Patrick and his men 10 years earlier. The movie also makes a touching effort to establish a personal bond between Elisabeth and Nathan’s daughter, Jessie. These carefully developed mirror images become part of the movie’s moral worldview. They culminate in the story’s climax, set on a deserted island, where goodness ultimately defeats evil. Interestingly, the ending makes a deliberate connection between the ultimate fate of Elisabeth’s daughter and the ultimate fate of the evil Patrick, like some sort of divine retribution. It is extremely refreshing to see such a high level of metaphorical symbolism in a Hollywood thriller.

Despite its moral worldview, DON’T SAY A WORD does contain a fair amount of strong R-rated foul language, though not as much as most R-rated thrillers of this kind. The violence also deserves an extreme caution rating, though it shies away from being really graphic or very strong. A little judicious pairing could have earned this movie a PG-13 rating, making it more appropriate for a mature family audience.