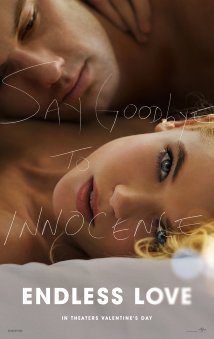 ENDLESS LOVE is a remake of a 1981 movie. Jade Butterfield is a young rich girl who falls for a high school heartthrob, though her father is against the relationship. David has always had eyes for Jade, but has never taken action, until the two graduate high school and talk. Instantly, Jade and David have chemistry, though her father opposes the relationship. Eventually, Jade has to choose between her father and David.

ENDLESS LOVE is cheesy. It isn’t a movie to take your teenager, let alone anyone else. The message is the father is the villain and the daughter should be able to choose anything she wants. Caution is advised on many levels, including fornication, marijuana use, drinking, affairs, etc. The movie’s message is physical lust is what love is and, if you don’t have physical love, then it isn’t love. This is completely untrue. God is committed to His people and showed the ultimate sign of love – sacrifice. Love is sacrifice and commitment, not physical lust. ENDLESS LOVE has a completely unrealistic view of love and may lead impressionable viewers astray.

Based on a popular movie made in 1981, ENDLESS LOVE follows Jade Butterfield, a young girl who falls in love with the high school heartthrob, David, though her father opposes the relationship. ENDLESS LOVE is an extremely stereotypical romance where the father is the villain and follow your heart is the ultimate goal.

Jade Butterfield has been in the background during her high school years, largely due to her brother, Chris, dying. All the while, the high school heartthrob, David, has loved Jade from a distance. When Jade’s family arrives at the country club, David takes their car as the valet man, and the two connect. Instant sparks, and the two have a desire for each other. Trying to impress Jade, David takes one of the luxury cars and drives Jade and his comedic best friend Mace around the town. Arriving back to the Country Club, everyone is up in arms, saying David had stolen the car. This leads David to being fired and Jade’s father having a first bad impression of David.

Jade has asked for only one thing from her parents, a large graduation party. Though she has invited the entire senior class, no one comes but David. David calls all his friends to come to the party, and Jade and him end up in a closet about to kiss, while Jade’s father, Hugh, is trying to make a toast for Jade. The two stumble out of the closet in front of the audience, and it’s apparent they’ve been up to no good.

Again, Hugh urges Jade not to see David, but instead Jade beckons David into the house and her innocence is lost. This is the ultimate sign of rebellion, but Jade’s mother is completely on board with the entire process, telling Hugh that the young love is an inspiration.

With David coming from a single parent lower class home, while Jade being very well off, Jade and David could not come from more different backgrounds. Jade has everything lined up to succeed in life and follow her father’s footsteps. Now though, Jade is willing to not take the important internship, but rather stay with David who’s working at his father’s car shop all summer. Ultimately, will Jade choose her father and her ambition, or will she choose David?

ENDLESS LOVE is a completely stereotypical young romance. The acting and storyline are very cheesy. The style is much like Nicholas Sparks but with no heart. The dialogue isn’t good and tells the story rather then lets it unfold.

ENDLESS LOVE is not a movie to take your teenager to, let alone anyone. The message is that the father is the villain and that the daughter should be able to choose anything she wants. Caution is advised on many levels, including fornication, marijuana use, drinking, affairs, etc. The movie really is saying that physical love is what love is, and, if you don’t have physical love, then it isn’t love.

This is not true. God is committed to his people and showed the ultimate sign of love – sacrifice. Therefore, love is sacrifice and commitment, not physical appearances. ENDLESS LOVE shows a completely unrealistic view of what love is and may lead impressionable viewers astray.