FEAR OF A BLACK REPUBLICAN 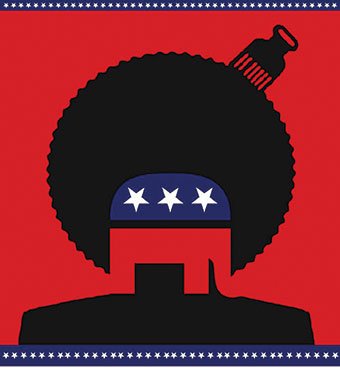 FEAR OF A BLACK REPUBLICAN is about white filmmaker Kevin Williams and his journey to discover why the Republican Party doesn’t resonate with African Americans in urban areas. Kevin interviews political leaders, activists, professors, Democrats, and Republicans to find why most blacks stopped voting for Republicans. He concludes that, for the two party system of checks and balances to work, both parties should actively be trying to win over the votes of the urban community. The movie ends with a question: Will the Republican party adjust its platform to draw in more African American votes or will it continue the status quo?

FEAR OF A BLACK REPUBLICAN raises an important question, but fails to answer it properly. The real issues that many urban areas face, such as poor education, crime, dysfunctional families, and welfare, are hardly addressed. The movie has no objectionable content and conservative ideologies are celebrated. However, other than prayer at a political event, the movie is void of Christian content. FEAR OF A BLACK REPUBLICAN needs some work to help it gain a larger audience.

(B, C, P, V) Light moral worldview with Christian elements and content reflecting America’s traditional, conservative values, including a prayer is said at a political event; no foul language; light violence in a video of Ku Klux Klan members chasing an African American man; and, nothing else objectionable, though the movie fails to deal with some of the important issues that might affect its subject matter.

FEAR OF A BLACK REPUBLICAN is a documentary made by Kevin Williams, a white republican who lives in an urban neighborhood in Trenton, New Jersey. Being a conservative in a black community that’s mostly Democrat, Kevin decided to become politically active. He started by volunteering his time to hang door hangers around his neighborhood for the re-election of George W. Bush. To his surprise, the Republican leadership wasn’t actively trying to win over the votes of the urban community. This spurs Kevin to take a deep look into the Republican Party to explore why the GOP is more focused on suburban areas instead of urban ones.

Kevin goes through the history of the Republican Party. He explains how after the civil war, most African-Americans identified themselves as Republicans. All of this changed decades later when Democratic Presidents Franklin Roosevelt and Harry Truman both made executive orders for African-American civil rights. After this, for the first time, a majority of African Americans identified themselves as Democrats, and it’s stayed that way ever since.

Kevin decides to ask the experts why they think the GOP lost the black vote. He interviews Democrats, Republicans, university professors, and African American civil leaders. One trend that seems to stick out. Conservative activists say they need more support from the Republican establishment to make political progress in urban neighborhoods, but the party leaders say that they need more grassroots support working on the ground for that to happen. Thus, the GOP is stuck in a kind of Catch 22.

The movie ends the movie with a question. Will the Republican Party adjust its platform to draw the African Community in or it will continue the status quo?

In FEAR OF A BLACK REPUBLICAN, a very valid and important question is asked that both Republicans and Democrats should pay attention; but, where the movie lacks is that it doesn’t adequately address the real issues behind the original question. Issues like the welfare system, poor education, high crime, and dysfunctional families are at the heart of what plagues urban areas. However, the documentary doesn’t really bring up these issues. Also, the cinematography and editing lack good quality, and the worldview isn’t strong enough. In the end, the movie will invoke some good discussion, but not necessarily the kind of discussion needed to make real change.

Rent or Buy FEAR OF A BLACK REPUBLICAN: