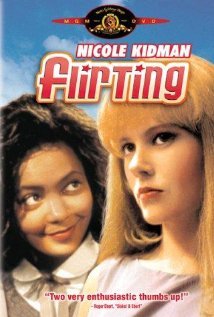 FLIRTING is a surprisingly intelligent, small-scale Australian film depicting an interracial romance between an intellectual misfit and a beautiful Ugandan student attending exclusive boarding schools in 1965. The film handles their relationship with considerable finesse, but stumbles in its uniform depiction of adults as stupid and cruel, as well as its assumption that affection must progress inevitably to intercourse.

FLIRTING is a surprisingly intelligent, small-scale Australian film depicting an interracial romance between an intellectual misfit, and a beautiful Ugandan student attending exclusive Australian boarding schools in 1965. In the film, St. Alban’s is a boy’s boarding school built near a scenic lake in Australia. For Danny, the intellectual son of a rural innkeeper, this environment is relentlessly hostile. Across the lake at Circencester Ladies’ College, a beautiful new arrival from Uganda, Thandiwe Adjewa, is greeted by sophisticated racism. Eventually, Danny and Thandiwe meet in an interscholastic debate. They realize they are kindred spirits, outsiders who must both cope with insensitive adults, claustrophobic rules and venomous student adversaries.

Much of FLIRTING depicts very skillfully the tentative attraction, temporary estrangement and then full-on passion for one another experienced by these students. Most of the acting, and all of the cinematography, are excellent. Unfortunately, the film depicts all adults as stupid or cruel and shows Danny and Thandiwe progressing to a sexual encounter (preceded by a rather detailed scene of fondling) just prior to her departure for Uganda. We can only pray that some day a filmmaker will have the maturity to depict everyone in a mixture of teenagers and grown-ups with care and intelligence, and the courage to show that romance, even in troubled or changing times, can flourish without sex.