"Caring for Your Captor" 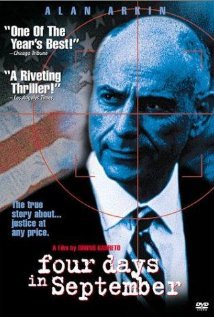 FOUR DAYS IN SEPTEMBER chronicles the true story of some Brazilian students who rise up in 1969 against the Brazilian military dictatorship. They kidnap the American ambassador to Brazil, Charles Burke Elbrick. Calling themselves the October Eighth Revolutionary Movement, they lack direction but are fraught with fervor. As the students interact with Elbrick, they discover he is compassionate and articulate. This provokes moral confusion in Paulo, a non-violent yet passionate writer. Maria, the group’s original leader, concedes leadership to fellow revolutionaries from the National Liberation Group. She eventually sheds her hardened exterior to reveal a frightened girl who dreads death.

This movie diverges from the typical liberal dogma by exploring the many human sides of a difficult political situation. The screenplay highlights the American ambassador’s humanity and dignity and briefly explores the dilemma of the secret servicemen who hunt down the MR-8. In the end, the students emerge as naïve and foolish, while the ambassador becomes the true hero in his quiet nobility and valor. FOUR DAYS IN SEPTEMBER is admirable and brilliant. Containing a moral worldview with strong socialist elements, the movie includes some violence, torture and a few foul words.

It is 1969, and Man has just walked on the moon. Suddenly, humans seem invincible, able to move mountains with sheer will and determination. From these heady days emerged student activists turned terrorists, struck blind with naïve idealism and clinging fervently to liberal causes.

FOUR DAYS IN SEPTEMBER chronicles the true story, based on a novel by Fernando Gaberia, of a group of Brazilian students who rose up in 1969 against the military dictatorship that gripped their country. In their zeal to free 15 prisoners and comrades, they hatch a plan to kidnap the American ambassador to Brazil, Charles Burke Elbrick (Alan Arkin). With understated drama, the movie examines the psychological and moral effects this venture has on its young perpetrators, who are unprepared for the magnitude of the consequences of their act.

When these youthful revolutionaries, who christen their alliance the October Eighth Revolutionary Movement (or MR-8), first convene in the beginning of the film, they lack direction but are fraught with fervor. Their leaders tell them they will experience a “rebirth” and a “resurrection” as they join the movement and assume new names and completely new identities. They must shed their past, forgetting their families, friends and birthplaces. This theme of sacrifice and resurrection is echoed by the recurring appearance of a hilltop crucifix at key moments in the film. Yet, as the story unfolds, the “purity” of their motives becomes muddied, and the black and white, “good verses evil” archetype of the noble revolution evolves into a complex, confusing mosaic of grays.

As the students interact with him, they discover the American ambassador to be a compassionate, articulate and even sympathetic man who could, in another situation, become a friend. This provokes moral confusion in Paulo (Pedro Cardoso), the movie’s main character, a non-violent yet passionate writer who composes the group’s brilliant communiqué to the press. The ambassador and Paulo engage in compelling discussions about politics, Brazil and life in general. The ambassador even addresses Paulo as “son.” Paulo is eventually charged with the responsibility of executing Ambassador Elbrick should their demands go unmet. With haunting, silent intensity, Paulo struggles between his developing respect for this foreign official and his loyalty to his cause.

FOUR DAYS IN SEPTEMBER also explores the relationships that emerge between students and their much more callous and jaded leaders. Maria (Fernanda Torres), the group’s original leader, has ceded the group’s helm to experienced revolutionaries from the National Liberation Group. As these savage revolutionaries impose a sense of do-or-die on the MR-8, she eventually sheds her hardened exterior to reveal a frightened girl who dreads the spectre of death. Though terrorists, each of the young rebels are presented as distinctly human and complex people, and sometimes even likable.

Of course, the sympathetic revolutionary is not a new character, but this film diverges from the typical liberal dogma by exploring the many human sides of a difficult political situation. Barreto’s screenplay not only highlights the American ambassador’s humanity and dignity, it even briefly explores the dilemma of the secret servicemen who hunt down the MR-8 in order to question and even torture them. In Barreto’s movie, even these men, reviled by many, are caught between the conflicting pulls of loyalty, pragmatism and conscience.

In the end, the students emerge as naïve and foolish, yet somehow enviable for their passion, while the ambassador becomes the true hero in his quiet nobility and valor. FOUR DAYS IN SEPTEMBER is thus admirable and at times brilliant in its attempt to portray the myriad sides of a political problem. It neither sugar-coats nor exonerates the revolutionaries, but some may object to any sympathetic light cast on terrorist acts. Ultimately, this thought-provoking film lends humanity and dimension to traditional stereotypes and offers a chance to examine stale questions in a new light.