GEORGE A. ROMERO’S SURVIVAL OF THE DEAD

"No Deliverance for Mankind’s Sinful Nature?" 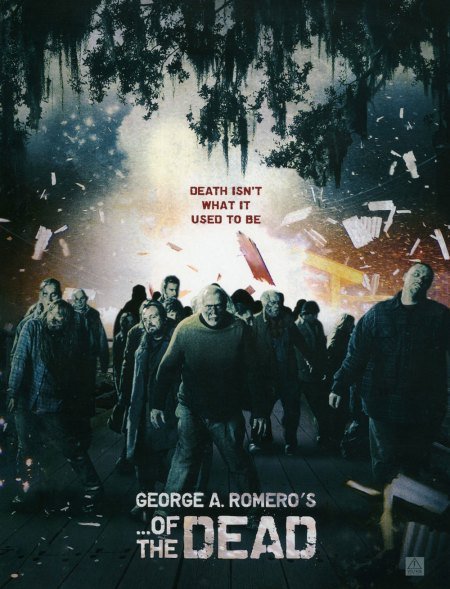 GEORGE A. ROMERO’S SURVIVAL OF THE DEAD is a gruesome zombie movie about a feud on an island run by two feuding Irish American groups. Patrick O’Flynn, the head of the smaller faction, wants to kill off the cannibal zombies, including infected children. Shamus Muldoon, the other leader (and a Roman Catholic), wants to keep them alive, in case a cure can be found for the zombie plague. O’Flynn teams up with a group of AWOL soldiers from the mainland, but Muldoon and his men capture them . He wants them to watch as he tries to interest O’Flynn’s infected daughter with her horse’s meat instead of human flesh. Of course, things don’t go according to plan.

George Romero, who began the gruesome zombie movie craze in 1968, tries to infuse SURVIVAL OF THE DEAD, like his other zombie movies, with social commentary on man’s violent, sinful nature. The movie is too low budget and pedestrian, however, to succeed well. It’s also full of gruesome violence and strong foul language. Finally, the Catholic Christian character does not always behave consistently, so the movie’s redemptive aspects are ultimately undeveloped and don’t inspire anyone.

(HHH, CC, BB, Ho, Ab, LLL, VVV, S, N, A, D, MM) Ultimately very strong humanist worldview that, however, has some overt Christian, biblical, moral content (including a reference to “the Good Book”) that, regrettably, is not developed or given a proper, uplifting Christian or moral conclusion, so movie ends on a rather nihilistic, depressing humanist note that tries to provide profound commentary on the relentless power of man’s sinful, violent nature, plus homosexual references where lesbian soldier keeps turning down male soldier’s advances and anti-Christian, anti-Catholic content where Catholic character expresses apathy about woman’s homosexuality and acts in other contradictory ways; at least 58 obscenities (many “f” words), seven strong profanities, three light profanities, and an obscene gesture; very graphic, gruesome, gory violence includes many zombies shot point blank in the head, zombies eat human and animal flesh, some zombie heads explode, limbs torn off, human internal organs eaten, human beings shoot at each other, humans and zombies are punched, etc.; no sex scenes but lesbian soldier speaks against male soldier’s advances; brief upper male nudity; alcohol use; smoking; and, stealing, feuding, people held against their will, zombies are chained up to keep them alive and harmless (in hopes of one day finding a cure).

As usual with his zombie movies, GEORGE A. ROMERO’S SURVIVAL OF THE DEAD has more on its mind than just cannibalism and murder. Even so, that doesn’t make this particular zombie movie any more aesthetically pleasing or entertaining than 99.9% of all the other gruesome modern zombie movies.

Romero almost single-handedly created the modern gruesome zombie movie with the black-and-white flick NIGHT OF THE LIVING DEAD from 1968. He’s been stuck in that genre ever since.

In SURVIVAL OF THE DEAD, there’s an island off New Jersey called Plum where two factions of feuding Irish Americans live. Patrick O’Flynn, the head of one faction, believes in killing all the zombie-infected cannibals, even children, by shooting them in the head. Muldoon, the head of the other faction, is a strong Catholic, however, who believes in keeping all the zombies alive, in hope that one day mankind can find a cure.

Muldoon and his men force O’Flynn off Plum Island. O’Flynn’s daughter, Janet, sides with Muldoon. Back on the coast, O’Flynn decides to cause trouble for Muldoon by enticing people who haven’t become zombies yet into going to Plum Island. One of the groups O’Flynn entices is a group of AWOL soldiers who have picked up an older teenage boy with an armored truck full of money.

After a big fight with some zombies on the mainland, O’Flynn and the soldiers use a ferryboat and its dinghy to travel to Plum Island. There, O’Flynn continues his feud with Muldoon.

Muldoon is trying to interest the zombies, most of whom he’s chained up, into eating animal flesh instead of human flesh. Eventually, he captures O’Flynn and the soldiers and makes them watch while he tries to interest O’Flynn’s other daughter Jane, a zombie, into eating the horse she’s been riding out of some kind of mindless habit.

Naturally, as with most of Romero’s other zombie movies, things don’t go according to plan. More mayhem and gore ensues.

It’s morbidly fascinating that this gruesome zombie movie includes a Christian character, Muldoon, who is trying to come up with some Christian answers to solving the zombie problem that has infected the human race. As this story plays out, however, Muldoon does not always behave as a consistent Roman Catholic or Christian. Thus, he clearly hates O’Flynn and has even killed some of the other human beings O’Flynn has sent to the island because they are strangers. Muldoon also sometimes takes the Lord’s name in vain verbally.

Although the ending indicates that the zombies can indeed become interested in eating animal flesh, the movie’s last scene indicates that human beings will always be at each other’s throats, literally and figuratively. Thus, the ending fails to offer viewers a truly redemptive answer for the human sins that Romero is apparently trying to direct our attention to here. The ending is also somewhat depressing as well as gruesome, which does not help this low-budget gore-fest rise above the average horror flick. In fact, SURVIVAL OF THE DEAD is so low budget, thin and rather pedestrian that not even its competent performances and striking last image can save it from the bottom of the movie box office barrel. It also has some extraneous subplots with no payoff.

Of course, like all of Romero’s other recent zombie movies, SURVIVAL OF THE DEAD includes scenes of brutal violence, graphic cannibalism, and abundant foul language. Clearly, there are much better, more inspiring, less profane, and less gruesome ways to make a movie that asks deep questions about the human condition, including man’s relationship to God. Ultimately, the most inspiring and spiritually uplifting topic for such a movie is the Full Gospel of Jesus Christ, the Divine Savior who two billion people look to for their salvation, redemption and renewal.