"Learning the Meaning of Family, Friendship, Hope, and Justice" 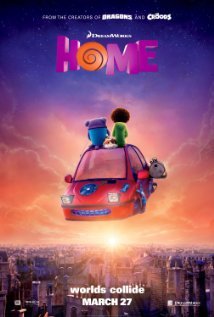 HOME is a funny, lovable animation about a clumsy alien named Oh. Oh and the rest of his fellow Boovs have relocated to Planet Earth, to run away from their predator, the Gorg. The Boovs uproot humankind from their homes and relocate them to a designated part of Earth. A little girl named Tip and her cat get left behind and separated from her mother. Tip lives in constant fear of being abducted by the Boovs. Oh accidentally invites the Gorg to his housewarming party. Now, all the Boovs are trying to arrest Oh, who runs into Tip and begins to realize humans are not as simple as he was told.

HOME has excellent production values, with a heartfelt storyline and believable characters. It’s full of color, comedy and music. Oh’s interaction with Tip turns him into a sacrificial hero as he learns that his people were wrong. The worldview in HOME is very strongly moral. It celebrates sacrifice, family, hope, freedom, doing the right thing, truth, and pursuing justice. HOME is a wholesome animated movie the whole family can enjoy.

(BBB, CC, PP, V, M) Very strong moral/biblical worldview as alien makes choices to do right, officer and other alien pursuit of justice, with strong Christian, redemptive elements as alien sacrifices his life/safety for the well-being of a friend and their planet, plus a celebration of freedom, family and truth; no foul language but some toilet humor as alien is heard eating the urinal deodorizer and finding out that the yellow water in the urinal is not lemonade; only light brief violence as captain comically strikes his followers on the head with his staff, flashback of evil aliens desolating planets; no sex; no nudity; no alcohol; no smoking or drugs; and, lying, fleeing/resisting arrest, girl separated from mom is abducted, and looting closed convenience store.

HOME is a funny, lovable animation about an alien Boov named Oh who’s relocated to planet earth with the rest of his species to run away from their predator, the Gorg. Oh is a Boov who makes countless mistakes and is the pariah of the Boovs.

When the Boovs move to Earth, they take over and uproot all humankind from their homes and relocate them to a designated part of Earth. A little girl named Tip and her cat get left behind and separated from her mother. Tip lives in constant fear of being abducted by the Boovs.

Oh is a friendly Boov and means well. He doesn’t fit and tries to make friends by throwing a housewarming party. When no one attends, he tries to send an email invitation to his friend, Officer Kyle, who completely denies being his friend. Oh accidentally sends the invite to the entire galaxy, including the Gorg.

Now with the entire Boov population looking for him to arrest him, Oh flees and meets Tip and her cat. The trio does their best to stay hidden. Tip gives Oh an ultimatum to help her find her mom and right the wrong of the Boovs, or she’ll leave him to face his doom with the Boovs.

Their quest leads to Oh learning that earthlings are not as simple as he’d been told. Oh learns to enjoy many things about human life. Oh now understands them and the importance of family and hope. He also realizes that the Boovs were the takers, not the Gorg, and determines to return the “shusher” stone back to the Gorg.

HOME has excellent production values, with a heartfelt storyline and believable characters. Oh begins as the worst goof-up of the Boovs, realizes his Boov leader was wrong about earthlings, and finally becomes the Boov leader.  In HOME, there’s the celebrity vocal talents of such as James Parsons (Oh), Rihanna (Tip), Steve Martin (Captain Smek), and Jennifer Lopez (Lucy) all do a great job voicing the characters.  HOME is full of color, comedy, and music. This is an animation fun for the whole family.

The worldview in HOME is very strongly moral. Oh chooses to do the right thing, as Officer Kyle and other aliens pursue justice. HOME also has strong Christian, redemptive elements. Oh sacrifices his life, freedom and safety for the wellbeing of a friend and Planet Earth. Hope and the value of family and friendship are also positive themes in the movie.

HOME is a wholesome movie for families. There’s only one scene of light crude humor while Oh is speaking from inside a restroom.