"What Man Physically Sees Is Not What God Knows" 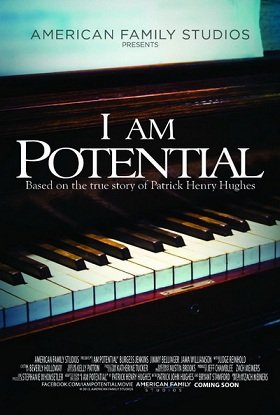 I AM POTENTIAL tells a true story. Patrick Henry Hughes was born in Louisville, Kentucky with a rare condition that didn’t allow his eyeballs to develop, along with a form of dwarfism that shortened his joints. While his mother, Patricia, does everything she can for her first-born son, his father, Patrick John, withdraws into his work. One night, however, he’s left to care for Patrick Henry alone and discovers his son has a God-given talent for music. This discovery sets them on a journey that brings the family closer together, and closer to the Almighty God who made them.

I AM POTENTIAL is a beautiful, heartfelt movie about love and dedication. It captures the devotion Patrick Henry’s parents had helping their son use his God-given talents to reach his full potential. Throughout all the horrible situations the family faces, they were able to stick together and keep on fighting. I AM POTENTIAL is well done. The strong cast works well together. I AM POTENTIAL tells a story that’s sometimes very sad, but the powerful, inspiring, underlying Christian message makes it worthwhile viewing for the whole family.

(CCC, BBB, M) Very strong Christian, biblical worldview, with many moments of family praying over troubling situations, redemptive elements with father choosing his family and disabled son as priority over a job promotion, friends and family come together to help disabled teenager accomplish his goals; no foul language; no violence; no sexual content; no nudity; no alcohol use; no smoking or drug use; and, very light miscellaneous behavior with dysfunctional family portrayal at the beginning of the movie.

Based on the true story of Patrick Henry Hughes, I AM POTENTIAL follows the life of a boy, blind and confined to a wheelchair, as he overcomes all odds and lets the world see his true God-given talents. Though often sad, I AM POTENTIAL is ultimately an inspiring and uplifting story for the whole family.

Patrick Henry Hughes was born in Louisville, Kentucky to a young father and mother. There were no complications with the pregnancy, that is, until the birth of their first baby boy. Patrick Henry was born with a rare condition that didn’t allow his eyeballs to develop, along with a form of dwarfism that shortened his joints. This was a big surprise for the young couple, especially for the father, Patrick John, who always dreamed of seeing his son playing football on the Louisville college team.

With this devastating news, the couple takes their baby boy home and begins to discuss the next steps needed to keep Patrick Henry alive. The mother, Patricia, takes this responsibility to heart and does everything she can for her son, including all doctor visits, surgery preparations and house renovations needed to accommodate Patrick Henry’s needs. That is, on top of all the typical care required for a growing child. Patrick John, however, dives deeper into the responsibilities involved with his job, fills all his free time playing basketball with friends, and is never home to take care of his son.

The bad choices Patrick John makes begin to ruin his family and leaves his wife in anguish. But, with constant prayer and faith from Patricia, things start to turn around in Patrick John’s heart. One night, he’s left alone to take care of his son and stubbles upon Patrick Henry’s love for music. This discovery greatly changes the way his father looks at him and gives him hope for Patrick Henry’s potential future.

Piano lessons begin for Patrick Henry, with the help of his father by his side, and quickly a talented star is born. As he grows older and better at his music playing, he begins to play for larger and larger crowds. With Patrick Henry’s growing fame, Patrick John is eventually faced with a dilemma between taking a promotion at work that requires more traveling and more time away from his family, or helping Patrick Henry reach his full potential, and succeed with the talents God has given him. His decision to choose his family and son over the promotion sets the two men on a journey that brings them closer to each other, and closer to the Almighty God who created such a wonderful, talented young man.

I AM POTENTIAL is a beautiful, heartfelt movie about the love and dedication that Patrick John and Patricia Hughes had for their sweet little boy. This movie captures the devotion they had to watch Patrick Henry use his God-given talents to meet his full potential.

Throughout all the horrible situations that the Hughes family was faced with, they were able to stick together and keep on fighting for their son. They are a great example of what it means to cast all your worries and cares on God, even in the roughest of times.

I AM POTENTIAL is well done. The strong cast works well together. Also, the movie portrays a thorough and complete story of Patrick Henry’s life in a very real way, while still showing Christ’s light throughout both the good and bad times. When you take this story at its face value, I AM POTENTIAL tells an often sad story, but the movie’s powerful, inspiring, underlying Christian message makes it worthwhile for the whole family.

Rent or Buy I AM POTENTIAL: